What on Earth Is This Statement From the Fraternal Order of Police? 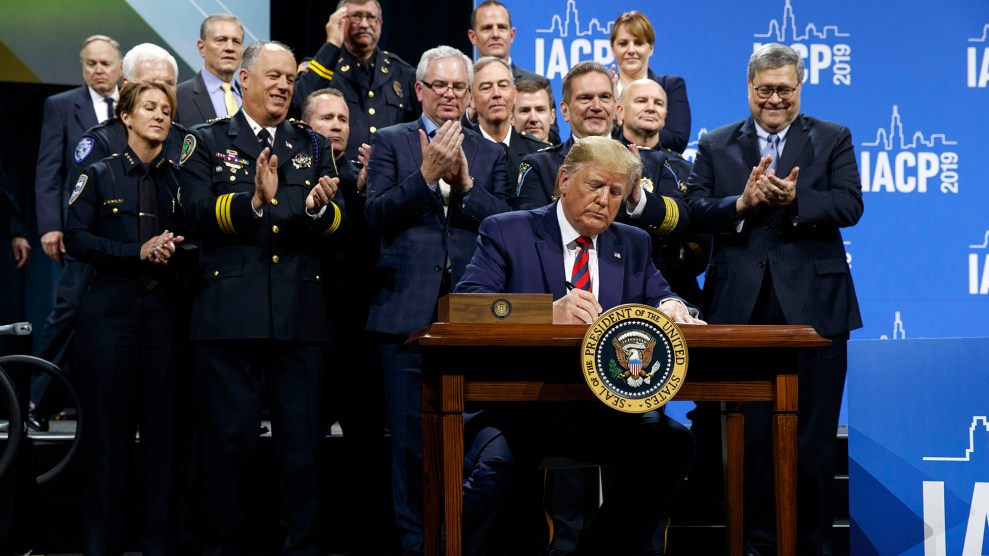 Here’s something to keep in mind the next time you see someone get tackled by a dozen cops for fare evasion:

The Fraternal Order of Police exists, in part, to defend these rights, not just for police officers, but for all citizens at every level, from the indigent living on the street to the President living in the White House. pic.twitter.com/sea0WYT4AD

Did you catch that? “…not just for police officers, but for all citizens at every level, from the indigent living on the street to the President living in the White House“? That’s the National Fraternal Order of Police very unsubtly rebuking congressional Democrats for their investigation into President Donald Trump’s Ukraine scandal. Trump, who has cracked jokes about police brutality and falsely accused his opponents of various capital crimes (“TREASON?”), has been warmly received by law enforcement agencies throughout his presidency, and the FOP, an organization of more than 300,000 law enforcement officers, released its statement one day after the president spoke to the International Conference of Chiefs of Police in Chicago.

Impeachment is not a legal process; it is a constitutional process. But it is unfolding in a way that’s similar to a criminal case: The House is currently in the preliminary stages of investigating reports of a high crime and/or misdemeanor, and if it decides to move forward on impeachment—the equivalent of an indictment—there will be a public trial in the Senate, where evidence will be heard and debated and the defendant will have a chance to defend himself. Due process! FOP’s concerns about transparency are all the more phony coming, as they do, from a group of people who have spent their entire careers preparing cases for grand juries—which as a rule, take place behind closed doors, with no input from defense attorneys.

But since they brought it up, this is what due process looks like to “the indigent living on the street.”

It's been a rough few weeks for Amazon-owned streaming site Twitch. Earlier this month, Tyler "Ninja" Blevins, the platform's biggest star, announced he would leave for Microsoft's streaming service Mixer. Over the weekend, a pornographic...
Fortune
08.12.19

Superheroes in Hollywood blockbusters conduct more violent acts on screen than the villains they are battling, says a study being presented at this year’s American Academy of Pediatrics conference. The study looked at the top-grossing...
Fortune
11.02.18

Bernie Sanders, one of the leading Democratic candidates for the presidency in 2020, recently revived his push to give American workers more ownership of the businesses they work for. The Vermont senator told the Washington...
Fortune
06.20.19

SpaceX and its workhorse rocket, the Falcon 9, are set to launch three spacecraft–including an Israeli moon lander– from Cape Canaveral Air Force Station in Florida on Thursday night. The SpaceX launch time is set...
Fortune
02.21.19

At some companies, marketing can be seen as a support function, secondary to the parts of the business that drive growth. But marketers can prove that’s not the case, says Dara Treseder, the new chief...
Fortune
12.12.18

Indiana elementary school teachers say they were shot “execution style” with painful plastic bullets during a January active shooter training, the IndyStar reports. “Four teachers at a time were taken into a room, told to...
Fortune
03.21.19