Over the course of the entire 2016 presidential election, TV ad spending approached a whopping $761 million, with more than 920,000 spots flickering across the airwaves. But that might be nothing compared to what we see in 2020. Thanks to Tom Steyer, who is pouring an enormous amount of money into TV ad buys, we are already ahead of 2016’s pace.

Using data from Kantar/Campaign Media Analysis Group, we can compare the pace of TV ad spending so far in 2019 with the same point in 2015. And so far, the 2020 campaign has seen more than twice as many television ad spots as the 2016 race. From January 1 through October 20, 2019, campaigns and outside groups spent an estimated $33.3 million on 76,030 television ad spots for the 2020 presidential election. By contrast, through the week of Oct. 18, 2015, campaigns and outside groups had aired only 32,191 TV spots — despite spending more money than they have so far this year ($43.1 million compared with $33.3 million).<a class="espn-footnote-link" data-footnote-id="1" href="https://fivethirtyeight.com/features/weve-already-seen-twice-as-many-presidential-tv-ads-as-at-this-point-in-the-2016-election/#fn-1" data-footnote-content="

The cost of a single TV spot can vary wildly based on things like who the ad’s sponsor is and where it airs. So we’ll stick with comparing spot counts as they represent the output (what voters see) rather than the input (what ad buyers spend). 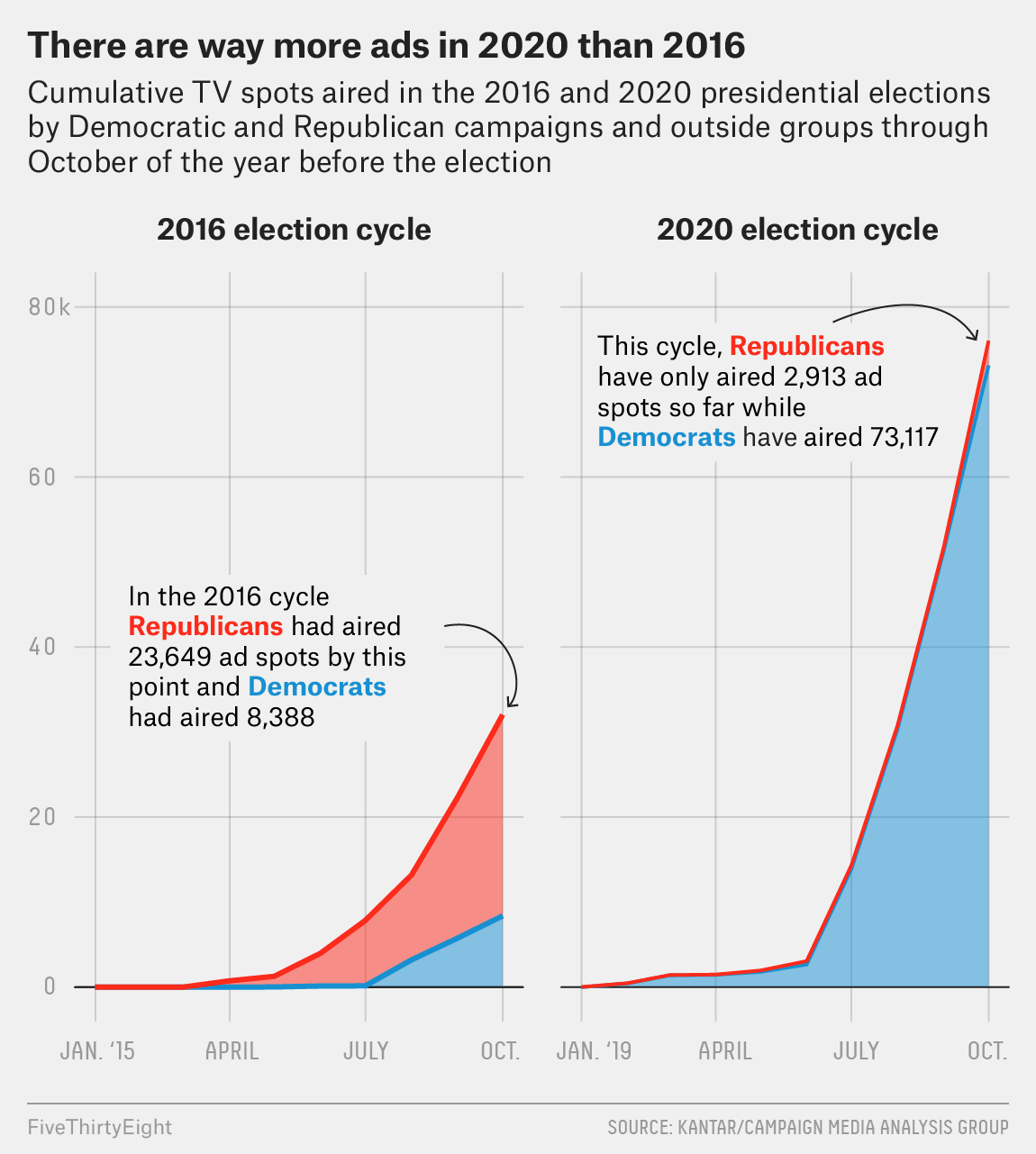 That disparity is especially wild considering that there were two competitive primaries in 2016 — on both the Republican and Democratic sides — while 2020 features just one spirited nomination fight. But already a total of 73,117 pro-Democratic spots have been aired in the presidential race so far compared with only 23,649 spots aired in 2015 by Republicans, whose primary (a record number of candidates, no dominant front-runner) resembles the current Democratic one.

And there’s basically one reason for that; his name is Tom Steyer. The self-funding billionaire has already aired 59,615 spots touting his candidacy, or 78 percent of all 2020 presidential spots so far — dropping an estimated $23.2 million in the process. In fact, without Steyer, advertising levels in the 2020 race look a lot more like 2016. Only 16,415 spots have been aired by sponsors other than Steyer, which is right in between the 23,649 GOP spots and the 8,388 Democratic spots aired through this point in 2015. It also wasn’t until Steyer jumped into the race in July that 2020 advertising really took off.

There wasn’t really a Steyer figure in the race in 2016, either. The most prolific advertiser at this point four years ago was former Secretary of State Hillary Clinton’s presidential campaign, which had aired 7,380 spots (accounting for nearly a quarter of 2016 advertising at the time). Right to Rise, the super PAC created to support former Florida Gov. Jeb Bush’s campaign, was close behind with 6,590 spots aired, followed by the Opportunity and Freedom PAC (former Texas Gov. Rick Perry’s super PAC) with 3,441 spots aired. However, that’s more than anyone else (aside from Steyer) has aired so far in 2019 (Sen. Kirsten Gillibrand aired just 2,788 spots before dropping out, and President Trump has aired only 2,540 spots so far).

One underappreciated difference between 2016 and 2020 that can help explain what’s going on (in addition to Steyer’s well-lined pockets) is that super PACs are playing much less of a role this year. At this point in 2015, outside groups were behind 69 percent of all spots that had been aired, but here in 2019, campaigns have accounted for 98 percent of the spots so far. (This also might explain why TV spending is lower in 2019 than in 2015 even though more spots have been aired — campaigns get better rates than super PACs.) It has become increasingly fashionable in the Democratic primary to eschew big-money donors; 11 of the 18 “major” candidates by FiveThirtyEight’s definition have sworn off super PACs specifically, including all three top contenders.

It’s hard to know what this will mean for the rest of the 2020 cycle, particularly if Steyer doesn’t keep up his furious advertising pace. But for all the talk about the rise of digital campaign ads, it’s clear the 2020 candidates still think television is an effective way to reach their audience.

Just as CNN was beginning its climate town hall event, President Donald Trump tweeted a list of “8 facts” boasting of the nation’s air quality and carbon emissions reductions. Several of his “facts,” however, are...
FactCheck.org
09.05.19

This is a rush transcript. Copy may not be in its final form. AMY GOODMAN: I wanted to turn to the issue of climate, as we continue to discuss this first Democratic debate. We’re talking...
Democracy Now!
06.27.19

For the second time, President Donald Trump delivered a State of the Union address peppered with false, misleading and exaggerated statements — many that we’ve heard before. In the following video, we highlight five of...
FactCheck.org
02.06.19

This is a rush transcript. Copy may not be in its final form. AMY GOODMAN: During the debate, Univision anchor Jorge Ramos asked former Vice President Joe Biden about the Obama administration’s record on immigration....
Democracy Now!
09.13.19

Quick Take Viral headlines wrongly suggest that the Ukrainian government gave more money than any other country to the Clinton Foundation. But the 2015 news report cited does not support that. Full Story  Misleading headlines...
FactCheck.org
10.25.19

Paul Ryan’s disgraceful last act: Providing cover for Trump on Yemen war The Senate finally found its spine this week. But just as Mitch McConnell steadied his wobbly feet to stand up to Donald Trump,...
Alternet
12.15.18

Foreign intelligence agencies have data placing Michael Cohen’s cell phone near Prague in summer 2016, according to a Thursday report from McClatchy. Relying on four unnamed sources with “foreign intelligence connections,” the story would confirm a...
Talking Points Memo
12.27.18