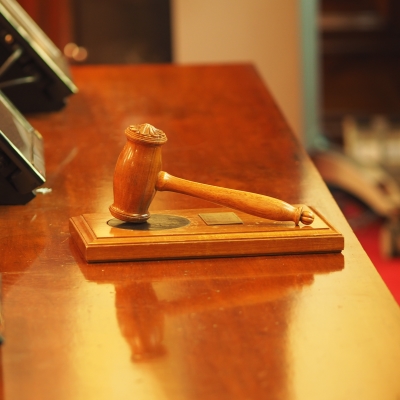 Before federal Judge Alex Kozinski abruptly retired amid sexual harassment allegations late last year, he made news for a scathing dissent he wrote.

In his March 2017 dissenting opinion, Kozinski criticized three of his colleagues on the 9th U.S. Circuit Court of Appeals for their decision to uphold a lower court’s temporary block on President Donald Trump’s original executive order instituting a travel ban on people from several predominantly Muslim countries.

Kozinski argued, for example, that the panel’s rationale that the executive order violated due process rights was misplaced because only a small fraction of the affected foreigners was entitled to due process. “This St. Bernard is being wagged by a flea on its tail,” he wrote.

But a handful of conservative websites this month posted a story that falsely describes Kozinski as a judge who “struck down” the travel ban, and presents the harassment allegations from last year as current news.

“9th Circuit Judge Who Struck Down Trump’s Muslim Travel Ban Busted In Sleazy Scandal,” reads the Dec. 5 headline on rightwing.news. The story earned thousands of shares on Facebook, and was also recently published on investmentwatchblog.com and therepublicanfighter.com.

The story goes on to include portions of two news articles — one from the Harvard Crimson and one from the Washington Post — about the allegations against Kozinski, who stepped down in December 2017.

But after that, the misleading story continues: “Now that’s sick, but then again, what else can we expect from a judge from the infamous 9th circuit court who is known for its radical far left agenda leanings.” The article refers twice to Kozinski as “liberal.”

In reality, Kozinski was widely known to be a conservative. He was nominated to the court by Republican President Ronald Reagan and was confirmed by the Senate in 1985, despite resistance from most Democrats.

In June, the Supreme Court upheld the Trump administration’s third iteration of the travel ban.

Editor’s note: FactCheck.org is one of several organizations working with Facebook to debunk misinformation shared on the social media network.

Quick Take Facebook users expressed outrage over a statement that is falsely attributed to Sen. Kamala Harris. The quote — about seeking “vengeance” against supporters of President Donald Trump — originated on a website that...
FactCheck.org
08.27.19

50 years ago, another president violated three basic principles of the rule of law, although not as blatantly as Trump. The “rule of law” distinguishes democracies from dictatorships. It’s based on three fundamental principles. Trump is violating...
Alternet
11.24.18

As the inaugural committee planned the landmark celebration, internal concerns were raised about whether Trump’s Washington hotel was overcharging for event space. The spending could be a violation of the law. When it came out...
Alternet
12.14.18

President Donald Trump says social media is “my form of telling the truth.” In fact, there are many well documented examples of Trump — as a candidate and as president — spreading false information on...
FactCheck.org
10.31.18

After months of protest, the Sudanese military ousted President Omar al-Bashir on Thursday, ending his nearly 30 years of authoritarian rule. Tens of thousands of protesters marched in celebration on the streets of Sudan. The...
Democracy Now!
04.11.19

It might sound strange, but presidential primary debates are arguably more important than general election debates. Primary voters have weak initial preferences and can vacillate among candidates, so they can be heavily influenced by events...
FiveThirtyEight
01.07.19

Sign up here to get On Politics in your inbox. We asked. You answered! There’s been a lot of debate within political circles over whether Democrats are calling out for a savior to enter the...
New York Times
10.31.19