Trump Wades Into U.K. Election, and Farage Might Benefit

The Atlantic
Power Up: The five most important things that happened on impeachment this week Headlines for November 1, 2019 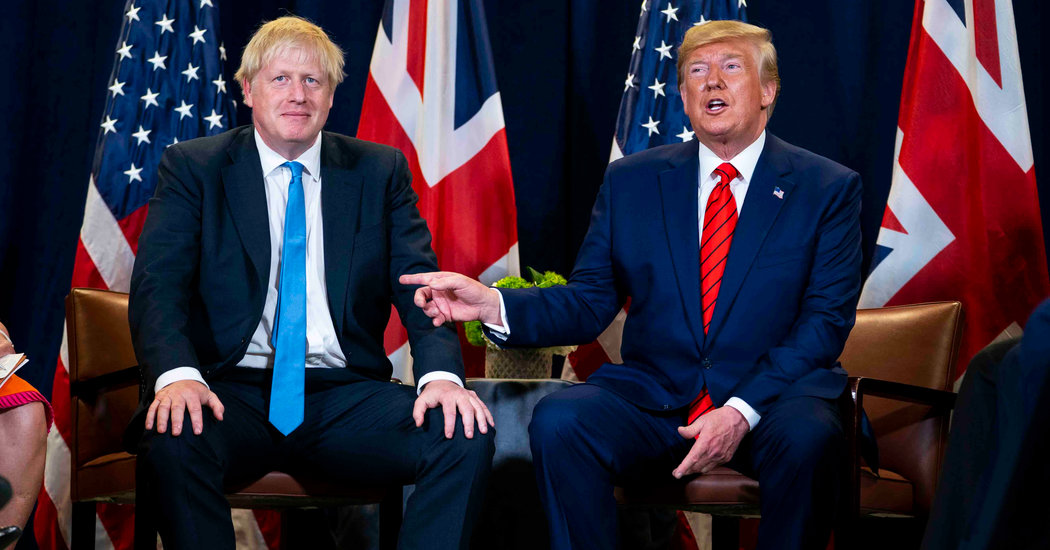 LONDON — For Americans, there was nothing particularly unusual about President Trump calling in to a London-based radio show on Thursday for a freewheeling conversation about British politics, Queen Elizabeth II and impeachment. Mr. Trump does that kind of thing regularly on “Fox & Friends.”

But when the president did it on the second day of campaigning for Britain’s general election, and the radio show in question is hosted by Nigel Farage, an insurgent political figure who is seeking to be a major player in that election, his intervention was bound to raise hackles in Britain’s political establishment.

“Donald Trump is trying to interfere in Britain’s election to get his friend Boris Johnson elected,” the Labour Party leader, Jeremy Corbyn, said on Twitter.

Mr. Trump heaped praise on Mr. Johnson, the prime minister, while disparaging Mr. Corbyn. Yet the biggest beneficiary was Mr. Farage, who has been uncharacteristically quiet during the recent weeks of upheaval in British politics and abruptly inserted himself back in the national conversation.

An experienced talk-show host, Mr. Farage managed to draw out Mr. Trump on his meeting with the queen in London in June (“I don’t think she’s ever in anything that’s bad,” he said), and his efforts to broker a White House meeting between the parents of a British teenager killed in a crash and the American woman who drove the car.

He did all this on the same day Mr. Trump was confronted with a House of Representatives vote in Washington authorizing an impeachment inquiry. Mr. Trump’s comment on that? “The Democrats are desperate,” he said.

Mr. Trump’s remarks were arguably a boon to Mr. Corbyn. He has set out to portray Mr. Johnson as a handmaiden of the American president. Even Mr. Trump’s praise for the prime minister came with a stinging caveat.

While Mr. Trump called Mr. Johnson a “fantastic guy,” with whom he had a “great friendship,” the president claimed that the agreement Mr. Johnson recently negotiated with the European Union for Britain to depart the bloc could hamper a future trade agreement between the United States and Britain.

“We want to do trade with the U.K. but to be honest with you, this deal, under certain aspects of the deal, you can’t do it.” Mr. Trump said to Mr. Farage, who is also the leader of the Brexit Party and favors leaving the European Union without any deal. “You can’t trade. We can’t make a trade deal with the U.K.”

Mr. Johnson has promoted Brexit by saying it would open the door to a lucrative new deal with the United States — one that he would be well-placed to negotiate because of his warm relationship with Mr. Trump.

The president did not explain why Mr. Johnson’s deal with Brussels would hinder one with Washington. It apparently has to do with technical provisions known as Geographical Indications. Trade experts split on how much of a hurdle they pose, but the details mattered less than the theatrics.

As Mr. Johnson and Mr. Corbyn took to the campaign trail to begin framing their messages, Mr. Trump threw the spotlight on Mr. Farage, whose party could inflict damage on both Labour and Mr. Johnson’s Conservatives.

“I’d like to see you and Boris get together because you would have some real numbers,” Mr. Trump said to Mr. Farage, who has proposed aligning with the Conservatives but has been rebuffed by Mr. Johnson.

“I have enough to do over here without having to worry about the psychology of two brilliant people over there, frankly,” Mr. Trump added. “I wish you two guys could get together. I think it would be a great thing.”

Mr. Trump saved most of his vitriol for Mr. Corbyn, who has painted the president as a predatory rival, eager to use trade negotiations to gain access for American companies to Britain’s National Health Service.

“He’d be so bad, he’d take you in such a bad way,” Mr. Trump said, “He’d take you into such bad places.” Noting that he had never met Mr. Corbyn, he added, “I’m sure he’s a lovely man, but he’s of a different persuasion.”

Mr. Corbyn said Mr. Trump has long had designs on the National Health Service and “knows if Labour wins, U.S. corporations won’t get their hands on it.”

Mr. Trump was generous to Mr. Johnson, praising his efforts to take Britain out of the European Union as quickly as possible. “He’s willing to do what no one else would do,” the president said.

Still his biggest gift was to Mr. Farage, whose Brexit party has been casting around for ways to influence the election. Mr. Johnson had hoped to neutralize the party by negotiating Britain’s departure from the European Union by Oct. 31.

When he failed to win approval in Parliament for the deal with Brussels, he was forced to ask European leaders for a three-month extension, which has exposed him to attacks from Mr. Farage.

Mr. Johnson plans to campaign on that deal as the swiftest route to Brexit. Mr. Farage has called on the prime minister to drop the deal and leave the European Union with what he calls a “clean break.” The Brexit Party is debating how many candidates to field and how aggressively to go after Conservative-held seats.

In this week’s fact-checking video, CNN’s Jake Tapper examines a false tweet promoted by President Donald Trump that purports to show Rep. Ilhan Omar “partying” and “celebrating” on the anniversary of the 9/11 terrorist attacks....
FactCheck.org
09.20.19

This is a rush transcript. Copy may not be in its final form. AMY GOODMAN: We begin today’s show with news that President Trump approved, then abruptly called off, U.S. preparations for a military strike...
Democracy Now!
06.21.19

FiveThirtyEight’s hallmark is that we use data to inform our journalism. There are other things that define us — empiricism, transparency, an outsider’s perspective and a little bit of irreverence. But when it comes down...
FiveThirtyEight
02.07.19

After the 2016 election, Vice President-elect Mike Pence was asked if there was “any contact in any way between [Donald] Trump or his associates and the Kremlin or cutouts they had.” Pence answered, “Of course...
FactCheck.org
04.18.19

PUBLISHED Jul. 22, 2019, at 12:24 PM Our state borders define our presidential elections. But what if they were different? By Ella Koeze Our perception of U.S. politics wouldn’t be the same without the Electoral...
FiveThirtyEight
07.22.19

In his much publicized visit to Iowa, President Donald Trump made a few false and misleading statements about agricultural exports: Trump touted an agreement with Japan on U.S. beef exports, but he wrongly claimed, “They haven’t...
FactCheck.org
06.13.19