Trump, Lifelong New Yorker, Declares Himself a Resident of Florida

He came of age in Queens, built Trump Tower, starred in “The Apprentice,” bankrupted his businesses six times, and drew cheering crowds and angry protesters to Fifth Avenue after his election. Through it all, President Trump — rich, bombastic and to many Americans the epitome of a New Yorker — was intertwined with the city he called his lifelong home.

In late September, Mr. Trump changed his primary residence from Manhattan to Palm Beach, Fla., according to documents filed with the Palm Beach County Circuit Court. Melania Trump, the first lady, also changed her residence to Palm Beach in an identical document.

Each of the Trumps filed a “declaration of domicile” saying that the Mar-a-Lago Club, Mr. Trump’s resort in Palm Beach, will be their permanent residence.

“If I maintain another place or places of abode in some other state or states, I hereby declare that my above-described residence and abode in the State of Florida constitutes my predominant and principal home, and I intend to continue it permanently as such,” reads the document that Mr. Trump filed.

“I formerly resided at 721 Fifth Avenue,” the document says, referring to Trump Tower, which has been his primary residence since he moved into the skyscraper off 57th Street in Midtown Manhattan in 1983. 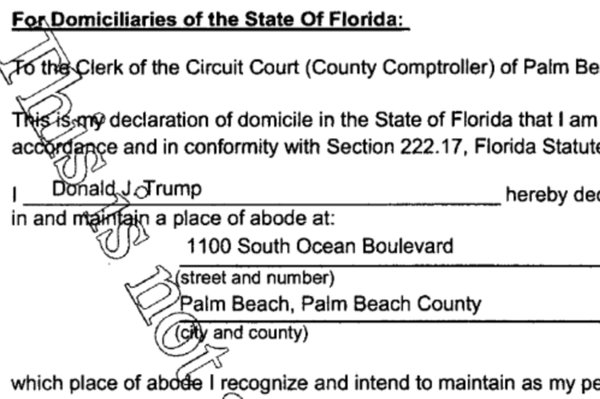 The document shows Trump, long a New Yorker, has declared that he’s a resident of Florida.

An attachment lists his “other places of abode” as 1600 Pennsylvania Avenue, the address for the White House, and his private golf club in Bedminster, N.J., where he spends warm-weather weekends and a few weeks every summer.

Since becoming president, Mr. Trump has spent 99 days at Mar-a-Lago compared with 20 days at Trump Tower, according to NBC News. Although Mr. Trump ran his presidential transition from Trump Tower and some aides had expected him to spend many weekends there in his Louis XIV-style triplex on the 58th floor, his presence created traffic headaches for New Yorkers and logistical and security challenges for the Secret Service.

White House officials declined to say why Mr. Trump changed his primary residence, but a person close to the president said the reasons were primarily for tax purposes.

The person also said that Mr. Trump, who is deeply unpopular in New York, was infuriated by a subpoena filed by Cyrus R. Vance Jr., the Manhattan district attorney, seeking the president’s tax returns, which Mr. Trump has not released. Changing his residence to Florida is not expected to have any effect on Mr. Vance’s case, which Mr. Trump has sought to thwart with a federal lawsuit.

It was unclear how much time he would spend in New York in the future or if he would keep his triplex at the top of Trump Tower. Under New York law, if he spends more than 184 days a year there, he will have to pay state income taxes.

Florida, which does not have a state income tax or inheritance tax, has long been a place for the wealthy to escape the higher taxes of the Northeast.

Changing his primary residence could carry significant tax implications for Mr. Trump, although how much is unclear without seeing his returns. But in changing his residence to Florida, he would most likely be avoiding New York State’s top tax rate of nearly 9 percent and New York City’s top rate of nearly 4 percent.

Leaving New York could also save money for Mr. Trump’s heirs at the time of his death. New York imposes a top estate tax rate of 16 percent for estates larger than $10.1 million.

In an article in the Florida Bar Journal in January 2019, three lawyers with Proskauer Rose wrote about the recent wave of people moving from New York to Florida in “large part” because of the repeal of the state and local tax deduction that was a byproduct of the tax bill that Mr. Trump signed into law in 2017.

“While it may be easy enough for an individual to buy a home in Florida and move, the act of physically moving to Florida is only part of the battle,” the three wrote.

“The real challenge is proving by clear and convincing evidence that the individual is no longer a New York domiciliary and does not qualify as a New York statutory resident for New York State income tax purposes,” they said.

Beyond taxes, Mr. Trump has repeatedly signaled the importance of Florida to his 2020 re-election effort and kicked off his campaign with a rally in Orlando. And he has often mentioned Mar-a-Lago when promoting his ties to the state.

In the longer term, the change could speak to Mr. Trump’s plans after his presidency ends. It has been an open question whether he would ever return full time to New York City.

In addition, Secret Service protection for Mr. Trump after his presidency ends would continue to snarl traffic in Midtown Manhattan — as would tourists and potential protests in front of Trump Tower — particularly if Mr. Trump chose to live there full time.

David Pratt, a partner at Proskauer Rose and one of the authors of the Florida Bar Journal piece, said Mr. Trump had probably changed his primary residence for the same reason other people have left New York.

“What he’s doing is not any different than what a lot of individuals from New York are doing, and they’re becoming Florida residents,” Mr. Pratt said.

Mr. Trump is due to travel to New York City this weekend for an event at Madison Square Garden, the rare instance of him visiting when he has no fund-raiser or official event scheduled. He is due to spend Saturday night at Trump Tower.

Since he became president, Mar-a-Lago remains Mr. Trump’s favored retreat. He has a residence on the grounds, enjoys easy access to one of his nearby golf clubs, entertains foreign visitors like Prime Minister Shinzo Abe of Japan and also plays host to a regular cast of visitors and members.

“I believed, perhaps to an irrational degree, that Manhattan was always going to be the best place to live — the center of the world,” Mr. Trump wrote in his book “The Art of the Deal.”

Hundreds of international progressive leaders gathered in Burlington, Vermont, last weekend for an event hosted by The Sanders Institute. While there, Amy Goodman sat down with independent Vermont Senator Bernie Sanders to discuss his efforts...
Democracy Now!
12.03.18

Minnesota Sen. Amy Klobuchar became the 10th major Democratic candidate for president on Sunday. She almost certainly won’t be the last addition to the field. Another 20 or so prominent Democrats are still considering a...
FiveThirtyEight
02.13.19

https://www.youtube.com/watch?v=SKN4VyeApeU Subscribe to the Real Time YouTube: http://itsh.bo/10r5A1B Bill gets gets up close and personal with SiriusXM host and bestselling author Howard Stern about relationships, forgiveness and therapy on Real Time. Connect with Real Time...
Real Time with Bill Maher
10.12.19

Opening presents, watching the ball drop in Times Square, eating roast beast. To these cherished end-of-year traditions, allow me to add one more: gawking at how bad my predictions were. It’s an exercise that both...
FiveThirtyEight
12.24.18

President Donald Trump clearly supports the oil and gas industry, but he made several false and misleading boasts about his impact on the energy sector. The president suggested that a change in federal policy was...
FactCheck.org
05.17.19

Here's what you need to know: Video House Democrats and Republicans were divided on setting rules for the impeachment inquiry into President Trump. The resolution would make evidence public and also allow Mr. Trump’s legal...
New York Times
10.31.19

(DONG DANG, Vietnam) — Smiling and holding up his clasped hands in a victorious pose, North Korean leader Kim Jong Un on Saturday boarded his private train at the Vietnam-China border for a 60-plus-hour ride...
TIME
03.02.19

Welcome to Pollapalooza, our weekly polling roundup. Poll(s) of the week The 2018 midterm election confirmed America’s urban-rural divide; Democrats excelled in cities, Republicans dominated in the country and the suburbs were the tiebreaker that...
FiveThirtyEight
12.07.18