TIME
The Iconic Castle on ‘Downton Abbey’ Is Bringing Its London Dry Gin to the U.S. How Trump Could Quickly Raise the Stakes in Hong Kong

What is supposedly (and probably) the smallest cinema in the world is tucked into the lobby of The Hoxton, a trendy, less-than-one-year-old hotel Brooklyn’s Williamsburg neighborhood.

At first glance, the theater seems to be a social media gimmick meant to appeal to the herds of fad-chasing millennials who call Brooklyn home and hope to be the discoverers of New York City's shiniest, newest offering. But a casual visit to the hotel and the cinema itself dispels that notion. Sure, the concept is a flashy one, but it doesn’t seek to break cultural norms or social media records. The tiny room is sort of just…there. It lends itself to photos, as does the entire building. But it’s more of a laid-back, casual stunt than an attempt to be the next-big-thing-to-do in a town filled with plenty of things to do: Its coolness has yet to be gentrified by the masses—which makes the entire endeavor that much cooler. 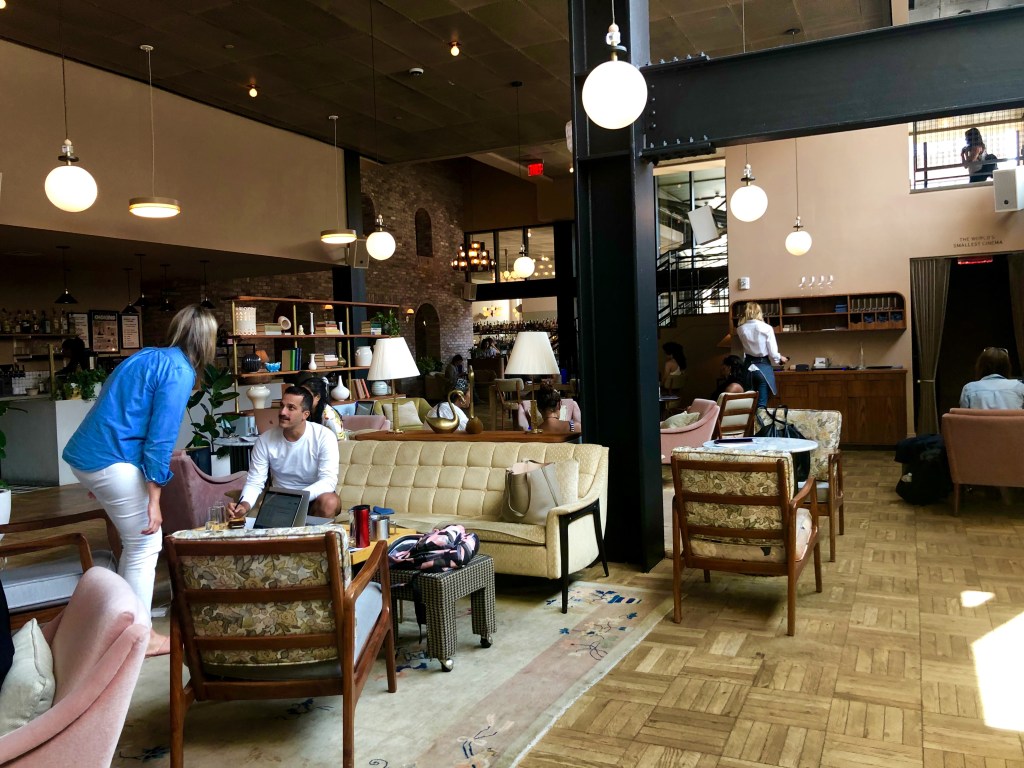 Inside the lobby of the Hoxton hotel in Brooklyn.
Anna Ben Yehuda Rahmanan

Not an official movie theater, the “World’s Smallest Cinema”—as a tiny sign hanging by the nondescript entrance indicates—can be found by two types of wanderers: folks walking around the lobby or hotel guests who take an elevator down from the entrance to the below-ground level, where the check-in desk has been set up strategically.

“[The elevator] opens up into what would otherwise be a small, empty space under the stairs,” explains Sharan Pasricha, CEO and founder of Ennismore, the hospitality company that created, owns, and operates the Hoxton brand. “We saw it was unused space so put our heads together to think what we might be able to do with it—perhaps something with a playful element of discovery.” 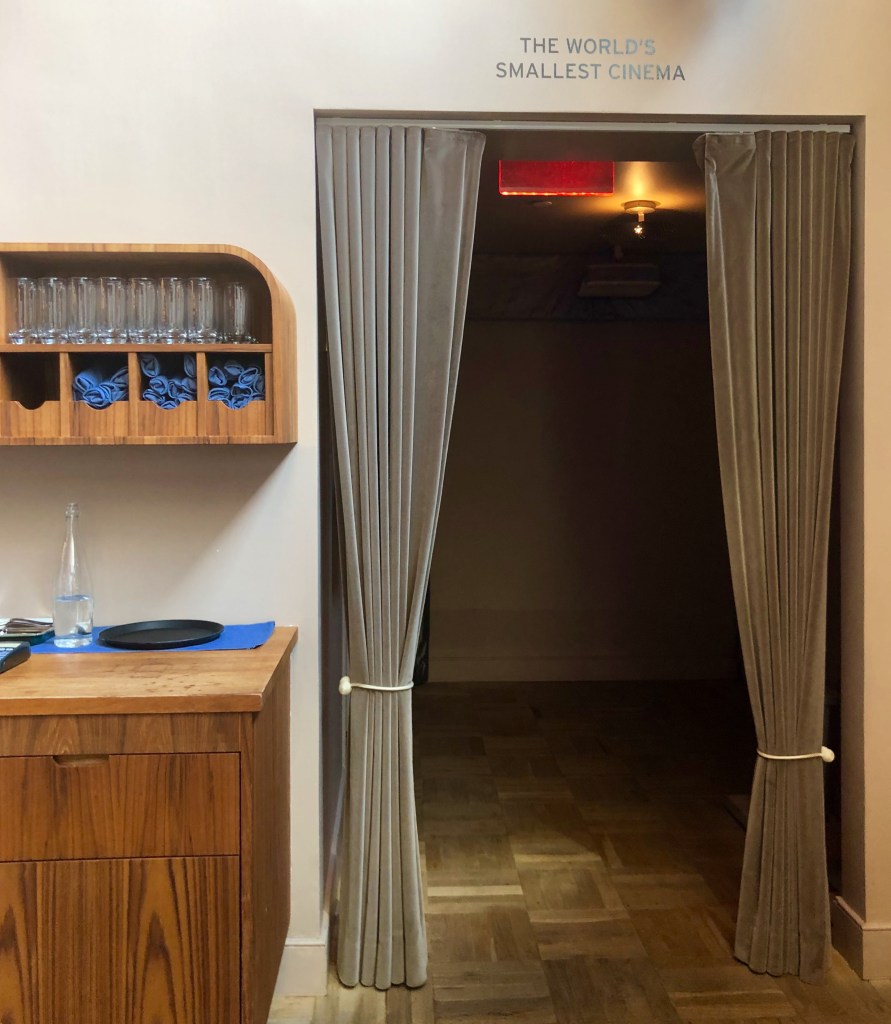 The two-seat theater sits just off the lobby of The Hoxton.
Anna Ben Yehuda Rahmanan

The result of the brainstorm? Just over 80 square feet of space outfitted with a projector, two sets of Master & Dynamic headphones, cinema-like curtains framing a white wall that functions as a screen, and two vintage-style movie-theater seats, sourced by in-house Ennismore Design Studio, reminiscent of days of yore.

The theater, accessible to anyone who finds it, first opened in December, and since then has been playing the same film on loop for a month, 24 hours a day. At the beginning of each month, the Ennismore team selects which movie to screen next, based on seasonality. First up was It’s a Wonderful Life, given the proximity to Christmas. “In July, we screened everyone’s favorite beach movie, Jaws,” says Pasricha. August brought along with it The Endless Summer II, and “in September and October, we’re adding two new hotels to our family with Southwark, London, and downtown Los Angeles both opening, so the movies will be themed around those.”

The newest properties on the Ennismore roster join other hotels in London; Amsterdam; Paris; Portland, Ore.; and Chicago—but the Williamsburg location is the only one with a movie theater. “It’s very Brooklyn, right?” Pasricha says. “It’s definitely become a fun conversation starter. There are those who come specifically for the cinema, who have seen it on social [media], and then there’s guests who spontaneously grab a cocktail from the bar and just settle in for a showing.” 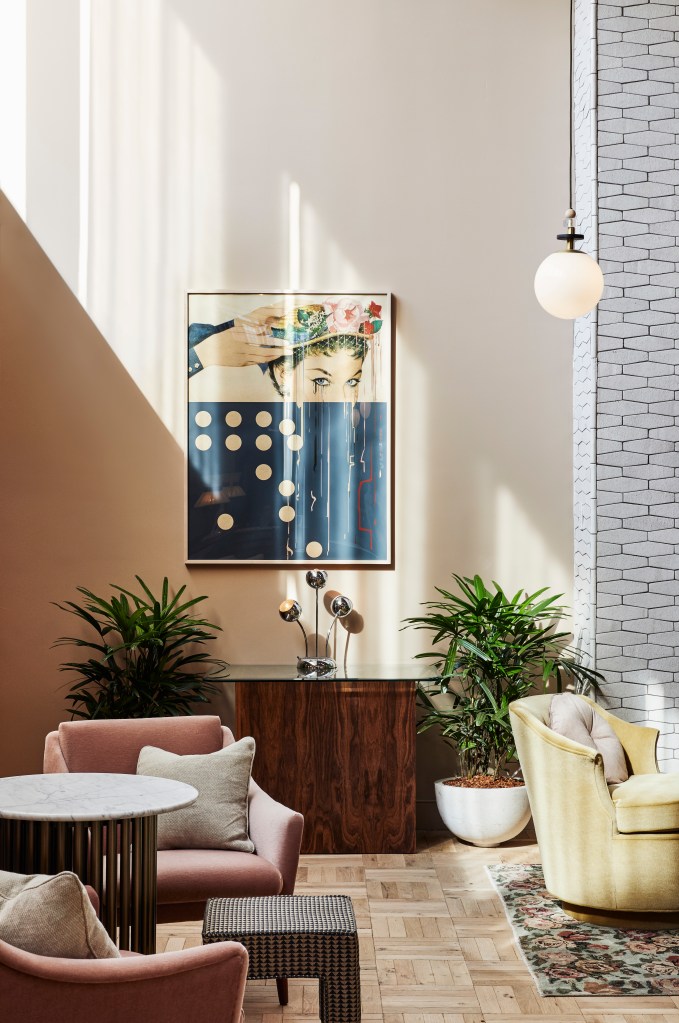 The lobby at the Hoxton hotel.
The Hoxton

In addition to the 80 square feet of film-dedicated space, the hotel is home to three restaurants and bars, plus a variety of open spaces used by the staff to host a number of events, from ballet performances to winter-wonderland-like occasions complete with cozy blankets and endless fondue.

This isn’t the first oh-so-tiny project of its kind in Brooklyn. Peephole Cinema is a free public movie theater in Bushwick, with locations in San Francisco and Los Angeles as well, operated by artist Laurie O’Brien. Unlike the space in The Hoxton, an actual room, the self-proclaimed “miniature cinema,” screens silent, experimental film shorts “through a dime-sized peephole installed in a public location.” The productions are no longer than 20 seconds and are screened on a loop, 24 hours a day, seven days a week.

And yet, neither destination is officially acknowledged by the Guinness World Records, which classifies Palastkino, a theater in Germany that opened in October 2006, as the smallest cinema on the planet “by seat capacity to operate as a regular commercial venture.” It has nine seats.

—How this wedding singer earns $1.5 million a year

—Tips and treats for stress-free travel with pets

—How Etsy crafted an e-commerce comeback

Any human identity is made up in part of beliefs about how to live—what is admirable, worthwhile, shameful, precious. These are not abstract opinions, but are better understood as parts of who we are, distinctions...
The New Republic
02.19.19

Gov. Andrew Cuomo of New York has made the legalization of recreational marijuana for adults a primary goal for the first 100 days of his new term. Cuomo, who was reelected in November’s midterm elections,...
High Times
12.17.18

Democratic Gov. Tom Wolf of Pennsylvania has indicated a willingness to consider the legalization of recreational marijuana. In a question and answer session with voters on Twitter on Wednesday, Wolf said that the experience with cannabis...
High Times
12.20.18

Spotify’s $340 million play for podcasts is not just an attempt to dominate every facet of your audio experience—though Spotify would certainly like that, too. Following its recent acquisitions of Gimlet, a podcast production house,...
Fortune
03.23.19

NEW YORK (AP) — California and New York City sued the U.S. Postal Service on Tuesday to stop tens of thousands of cigarette packages from being mailed from foreign countries to U.S. residents, saying the...
High Times
10.23.19

This is a rush transcript. Copy may not be in its final form. AMY GOODMAN: We’re broadcasting from the Sundance Film Festival in Park City, Utah. While Hollywood continues to be a male-dominated industry with...
Democracy Now!
01.29.19

New York magazine writer Rebecca Traister, the author of a new book about women’s anger called “Good and Mad,” says it is way, way too soon to pat ourselves on the back for the gains...
Recode
10.31.18