The White House Has No Facts So They Just Lie

TIME
Napolitano Makes Fox And Friends Sad: Schiff Is ‘Following The Rules’ Chicago Teachers and UAW Members Show That Labor Movement Is Back After “Decades of Concessions” 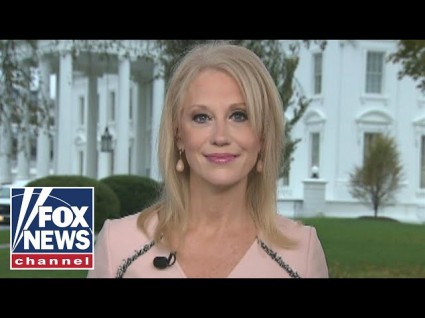 Kellyanne Conway was on Fox & Friends this morning and was asked whether Democrats would really vote on an impeachment resolution this morning. She said:

CONWAY: ... you know why we're confused about whether they'll take the vote? Because you have the Democratic leadership, Nancy Pelosi, saying, "Well, we don't need to do that yet," you have Steny Hoyer completely confused, it seems, as to what an impeachment resolution is. You know, all the armchair psychologists out there constantly wanting to analyze the president of the United States ought to have a little go at people like Joe Biden, Hillary Clinton, Steny Hoyer, Nancy Pelosi. These people -- every time they open their mouths, they make no sense. Something going on in there, folks? So they can't even get it right.

Impeachment is simple math: You either have the votes or you don't. And guess what? Dirty little secret: They don't have the votes.

She went on to say:

You just went through the list of Democratic members of Congress who have not committed to an impeachment inquiry. That's key.

Think about all the people they represent — the 17 swing states that are basically being looked at and are in play for next year. The people, especially the independents in those states, are allergic to a protracted impeachment. Impeaching a president is an extraordinary event that's rarely done because we have democratic elections.

Literally within hours, Democrats held the vote on the inquiry. It passed by a 36-vote margin. Only two Democrats voted no.

This is where I'm supposed to quote 1984 -- “The party told you to reject the evidence of your eyes and ears. It was their final, most essential command.” But I don't think this is Orwellian. I don't think Conway or Fox or the rest of the GOP actually expects the base to believe that Pelosi failed and the vote didn't happen. What I believe is that they think there's value in talking trash about Democrats, irrespective of whether the trash talk is factually accurate. It makes the base feel good. It makes the base feel angry. It makes the base feel superior to those allegedly elitist Democrats. I think it's aimed purely at the collective reptile brain. It isn't meant to inform, or even misinform.

Here it is again in a Fox interview with White House "press secretary" Stephanie Grisham:

Just after the House votes 232-196 to advance the impeachment inquiry, @PressSec claims to Fox News that "Nancy Pelosi has lost all control over there." The vote would seem to say otherwise. pic.twitter.com/oAh27ihpi0

GRISHAM: ... I've got to say, Nancy Pelosi has lost all control over there. That is clear. Phase 1 of this impeachment sham was all behind closed doors. Now they're moving to Phase 2, which is supposed to be public. I'm wondering, from the first phase, are we going to be able to see any of the transcripts, or know what was said? Is any of the first phase going to come to light, or are we just starting Phase 2-- and we don't know the rules yet for the White House. Are we going to get to even be involved? I don't think so.

Pelosi had just won a crucial vote decisively, but she's "lost all control over there" -- yeah, right. As for the rest of what Grisham said -- "are we going to be able to see any of the transcripts, or know what was said? ... and we don't know the rules yet for the White House" -- gosh, if only there were a way to determine the answers to those questions...

The resolution allows the president and his counsel to request and query witnesses and participate in impeachment proceedings once they reach the Judiciary Committee, which is tasked with writing any articles of impeachment that will be voted on by the House. It also authorizes the House Intelligence Committee to release transcripts of its closed-door depositions to the public....

This will be understood by most Americans very soon. Hell, they may even have explained on it Fox's "straight news" programs.

But I don't think this is meant to deceive the deplorables -- at least not for very long. It's meant to make them feel righteous rage, even if only for a few hours or days. The facts won't justify that rage, and the Trump base will (probably) know those facts, but they'll still have experienced the rage, and that's the outcome the GOP and its propagandists want. Once this complaint has been made irrelevant by reality, Fox, Grisham, et al. will just move the goalposts and repeat the process, ad infinitum.

Published with permission of No More Mr. Nice Blog

Heritage turkeys, known for their robust flavor, small breasts and prices that can exceed $10 per pound, have been steadily gaining in popularity. They’ve even landed on the National Restaurant Association’s Top 20 Food Trends...
Fortune
11.16.18

Welcome to a weekly collaboration between FiveThirtyEight and ABC News. With 5,000 people seemingly thinking about challenging President Trump in 2020 — Democrats and even some Republicans — we’re keeping tabs on the field as...
FiveThirtyEight
03.08.19

The partial government shutdown is now in its third week as the impasse over President Trump’s demand for $5.7 billion in border wall funding showed no signs of abating over the weekend. Trump threatened to...
Democracy Now!
01.07.19

Musician Jordan Kahn and Adam Sandler’s character in The Wedding Singer may both wear bold blazers, but that’s where the similarities stop. Though Sandler’s character might personify wedding bands of the past, today’s groups—like Kahn’s...
Fortune
07.21.19

Next time you’re browsing Yelp reviews, check out who owns the business. The restaurants and shopping reviews app and website is adding a feature that will tell customers whether a business is women-owned. Businesses owned...
Fortune
03.01.19