Satellite images show Delhi’s in for another smoggy winter 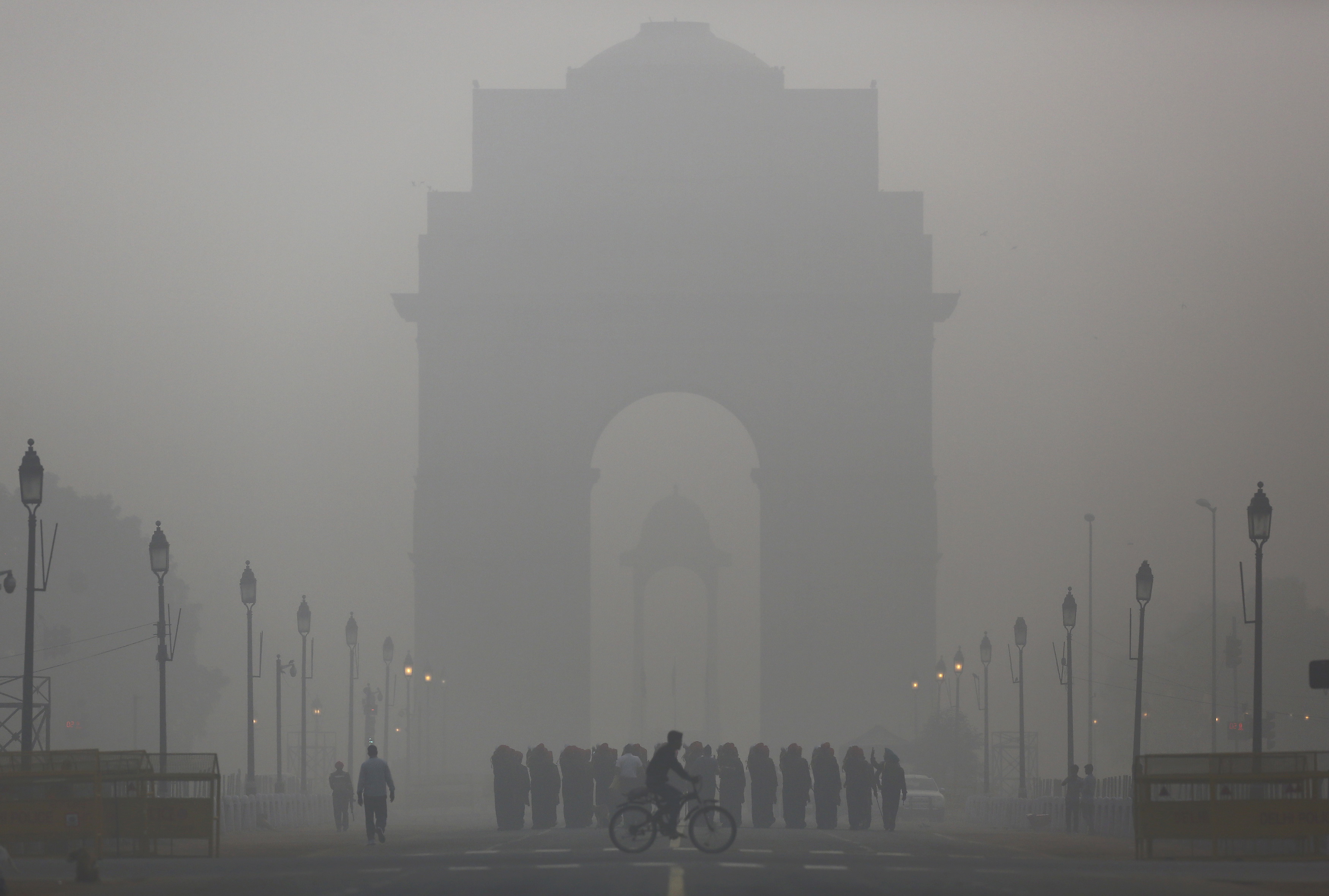 Crop-burning is back in north India, raising the spectre of another smoggy winter for New Delhi.

Satellite images from the US space agency NASA show that farmers in the states of Punjab and Haryana have been burning crop residue beginning earlier this month.

The photograph below was taken on Sept. 30. The red spots indicate the places where the annual crop burning was on. 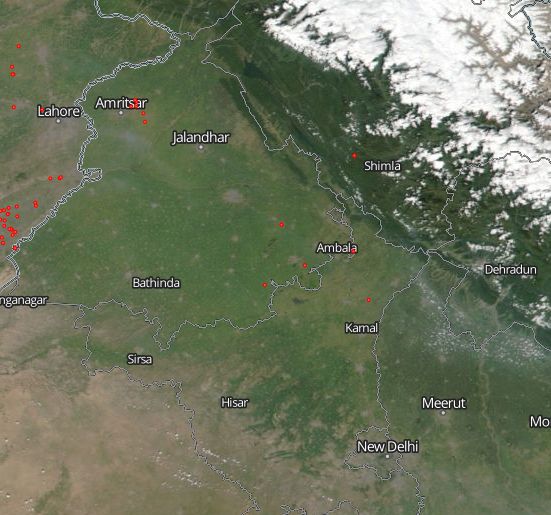 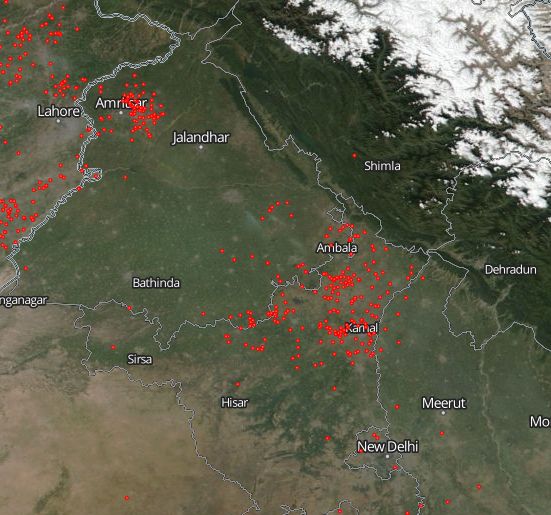 The Indian government has said that crop burning accounts for a quarter of the air pollution in India’s capital every winter. Other causes include industrial and construction dust, as well as diesel exhausts.

Indian farmers harvest their crops manually using sickles. This leaves plenty of crop stubble in the fields, which they hurry to clear before the next sowing season begins.

While the government has been asking farmers to consider other ways of disposing of the stubble, burning remains the easiest and least expensive practice.

The smoke from the farms of Punjab and Haryana travels towards Delhi, which lies just a few kilometres towards the southeast of these agricultural states. There it mixes with the fog to create a toxic smog every winter.

“In summers, because of the heat, aerosol can mix with air up to 5-6 kilometres vertically. But this range comes down to 1-1.5 km because of the stable atmosphere in winter (when the air below gets cold and does not rise up),” said KJ Ramesh, director general of meteorology at India Meteorological Department. “When the height is less, the smog is thicker, and it won’t get dispersed unless there is a strong wind.”

But no major winds flow through Delhi in the winter, Ramesh said, providing the smog no escape route.

Last year, particulate matter of diametre under 2.5 micrometres (PM 2.5) breached the 999 mark in Delhi, more than three times what is deemed hazardous. Roughly 60% of PM 2.5 originates from sources outside the territory of Delhi.

What’s worse is that the annual crop burning has only just begun. In Punjab, by the end of October, the NASA images usually show the entire state in red. 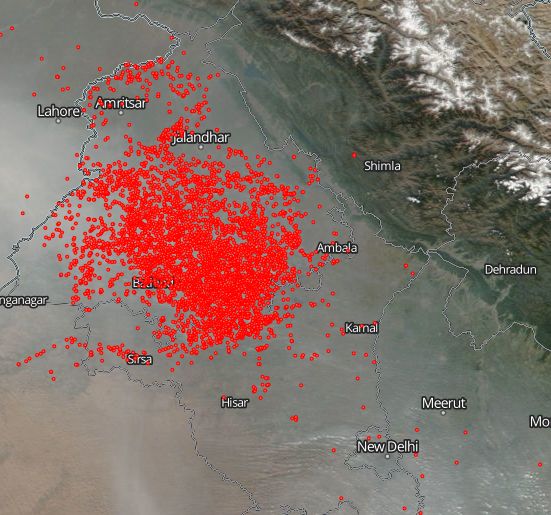 This year, though, the Punjab Pollution Control Board has assured reduced stubble burning. Up to 12,500 straw management and harvester machines have been supplied to farmers at subsidised rates, the board’s member secretary Krunesh Garg said. These include machines that can cut and uproot the stubble before sowing the new seeds.

But not everyone is convinced. In a statement on Oct. 08, Delhi environment minister Imran Hussain threatened to initiate legal action against the union and the state governments.

“In case effective steps to mitigate the menace of stubble burning are not initiated by the respective state governments, the Delhi government may be left with no other option but to knock the doors of the appropriate courts of law,” Hussain said.

President Trump drew attention on Tuesday to one of the deepest questions about American life: who gets to be a citizen. The president told “Axios on HBO” that he intends to end birthright citizenship by...
TIME
10.30.18

Senate Republicans and Democrats reached a deal on $4.6 billion in emergency funds to deal with a surge in migration at the U.S. border with Mexico, people familiar with the deal said Tuesday. President Donald...
Fortune
06.18.19

President Donald Trump’s former personal attorney Michael Cohen is testifying to Congress on Capitol Hill about some of the president’s alleged illicit financial dealings—and Merriam-Webster’s word of the day managed to convey some timely significance....
Fortune
02.27.19

Canada's federal government has officially stated that legal cannabis being infiltrated by organized crime is not a major concern. The post Canadian Officials Not Concerned About Organized Crime in Legal Cannabis appeared first on High...
High Times
11.07.18

Mattel’s stock tumbled 18% Friday, after some worrisome financial guidance derailed its analyst day. The major U.S. toymaker revised down its estimated revenue this year, thanks in part to declining sales of two franchises, Thomas...
Fortune
02.15.19

Another chapter in the ongoing struggle over medical marijuana in Utah has just been slammed shut. This week, the Utah Supreme Court threw out a lawsuit filed against the state by a medical marijuana advocacy...
High Times
08.08.19

As the Trump administration continues to defend firing tear gas into crowds of asylum seekers, we look at the history of tear gas, which is banned in warfare but legal for federal authorities and police...
Democracy Now!
11.28.18