Report: Detained immigrants say they were forced to clean detention facility for $1 a day 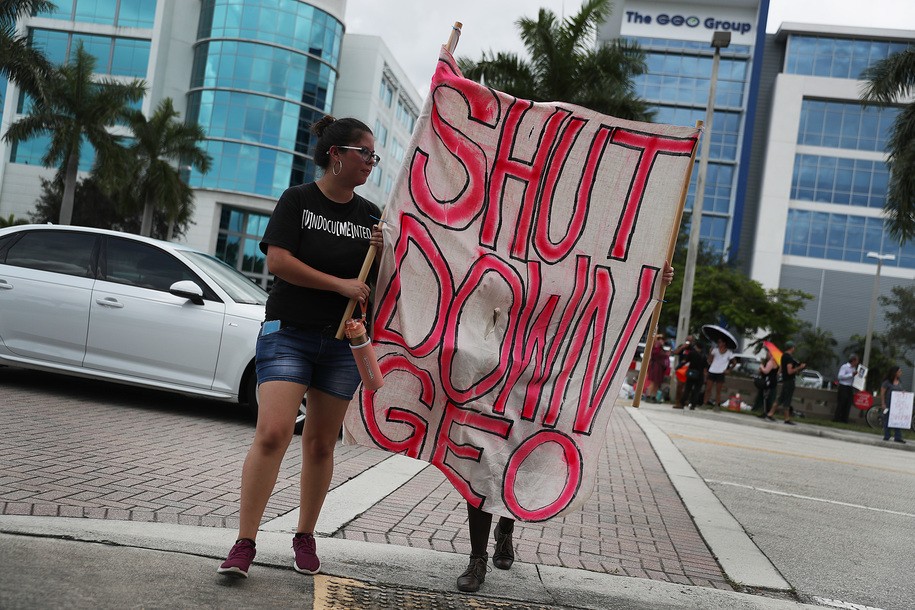 One detail that’s getting a particular amount of attention? As reported by Miami New Times, internal emails from staffers which include complaints that detainees were not scrubbing the facility to their liking. After receiving an email of this nature in May, for example, subordinates reportedly made detainees wax floors, mop, and sweep wings of the detention center.

Ethics aside, why, if true, is this a problem? Immigration detainees are held on civil charges instead of criminal ones. Detainees have not been convicted of crimes. On a basic level, this is what (theoretically) separates the treatment of immigration detainees and incarcerated people. Voluntary work programs, however, are authorized by the federal government. Provided they’re actually voluntary, they’re technically legal.

Novoa, however, says he was coerced into working as a janitor at the facility. He said that if he refused to clean in the facility, his refusal to work would have landed him in solitary confinement. Another detainee claims he was threatened with being transferred to another housing unit at the facility. So even removing the pay factor from the equation, these claims paint a picture where “choice” is essentially a fever-dream.

"If given a meaningful choice, Mr. Novoa would not have worked for $1 per day," the suit stated. When people are systemically disenfranchised of power and autonomy, choices they’re “offered” are choices only in language, not in the practical world.

What does the company have to say about all of this? GEO passed the buck to ICE. GEO explained that it doesn’t employ the immigrants in question, and thusly doesn’t need to adhere to minimum-wage laws. If GEO doesn’t employ these people, who does? ICE.

“This is not and has never been a program implemented unilaterally by service providers like GEO, and the wage rates associated with this federal government program are stipulated under long-established guidelines set by the United States Congress,” a GEO spokesperson explained to Capital & Main.

And while according to ICE, detainees only need to keep their immediate space clean (no clutter, beds made, and so on), this all circles back to the idea that this “work program” is voluntary. But as discussed above, a work program isn’t “voluntary” if you’re threatened with solitary confinement if you refuse to participate.

It is hard to know what role negative feelings about black politicians played in the likely gubernatorial losses of Democrats Stacey Abrams in Georgia and Andrew Gillum in Florida. Neither race has been officially called,...
FiveThirtyEight
11.15.18

A Florida appellate court ruled on Tuesday that a law enacted to license cannabis providers in the state does not comply with the amendment that legalized medical marijuana and is therefore unconstitutional. The ruling by...
High Times
07.12.19

On Monday, union teachers in Denver, Colorado went on strike. Coming on the heels of a late-January victory for striking teachers in Los Angeles, the Denver teachers’ revolt is taking aim at many of the...
High Times
02.12.19

There were 10.7 million unauthorized immigrants living in the U.S. in 2016, according to the Pew Research Center. When President Donald Trump took office and increased immigration enforcement, he called these people “criminals of all...
Fortune
05.17.19

Just days after Florida lawmakers introduced bipartisan bills to honor out-of-state medical marijuana patients, Democrats in the House are upping the legislative ante with a pair of bills to legalize and tax adult-use. Given how...
High Times
02.27.19

In January, President Donald Trump vowed to improve the visa application process for highly-skilled foreign workers seeking H-1B visas. But according to new reporting from the Associated Press, immigrants with specialized skills are seeing their...
Fortune
02.25.19

Trump Threatened Mexico With Tariffs, But His Demands Are Vague

What Republicans And Democrats Are Doing In The States Where They...

UK Talk Show Hosts Under Fire For Cutting Off Conversation With...

Toronto Is Now Home to a Thriving Syrian Food Scene

U.S. Tariff Deal with Mexico, Canada Is Also About Cutting Off...

Parents May Lose Custody of Toddler with Cancer For Rejecting Chemo...

A Tequila Sommelier on How to Drink Mexico’s Favorite Spirit