Common Dreams
After Getting Whaled on by Environmentalists, the Trump Administration Is Helping a Vulnerable Sea Mammal Meet the Democrats Who Broke Ranks on Impeachment 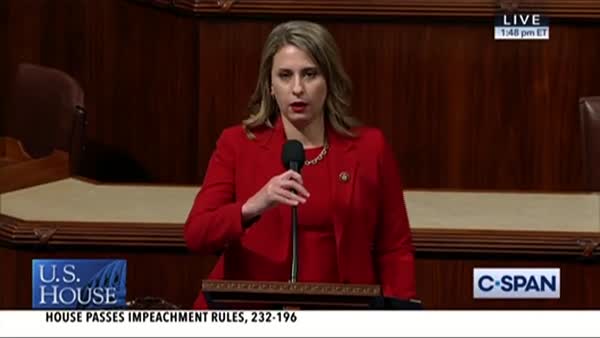 Sadly, Rep. Katie Hill (D-CA) gave her last speech from the floor of the House of Representatives today, after a scandal involving leaked nude photos of her prompted an ethics investigation, and ultimately, her resignation. The day she chose as her last had symbolism, though. Before her farewell speech, cast her ballot in the House's procedural vote in the impeachment proceedings against Donald Trump.

The first half of her speech was a master class in contrition and acceptance of responsibility — something of which the current GOP knows little. She also expressed gratitude for the honor of having served in Congress for even a short time, representing "the unheard in the halls of power. I wanted to show young people, queer people, working people, imperfect people that they belong here, because this is the people's House."

Then, though, she took a blowtorch to the hypocrisy and double-standards that forced her resignation into sharp relief with what men — especially Republican men in power in Washington, D.C. — are permitted to circumvent without the slightest loss of prestige.

KATIE HILL: I will never shirk my responsibility for this sudden ending to my time here. But I have to say more because this is bigger than me. I am leaving now because of a double standard. I am leaving because I no longer want to be used as a bargaining chip. I'm leaving because I didn't want to be peddled by papers and blogs and websites, used by shameless operatives for the dirtiest gutter politics that I've ever seen and the right-wing media to drive clicks and expand their audience by distributing intimate photos of me, taken without my knowledge, let alone my consent, for the sexual entertainment of millions. I'm leaving because of a misogynistic culture that gleefully consumed my naked pictures, capitalized on my sexuality and enabled my abusive ex to continue that abuse, this time with the entire country watching.
I am leaving because of the thousands of vile, threatening emails, calls and texts that made me fear for my life and the lives of the people that I care about....Because I've been told that people were angry when I stood strong after the first article was posted, and that they had hundreds more photos and text messages that they would release bit by bit until they broke me down to nothing, while they used my faults and my past to distract from the things that matter most. I'm leaving because there's only one investigation that deserves the attention of this country. And that's the one that we voted on today.
[...]
I'm leaving, but we have men who have been credibly accused of intentional acts of sexual violence remain in board rooms, on the Supreme Court, in this very body, and worst of all, in the Oval Office. So the fight goes on. To create the change that every woman and girl in this country deserves. Here in the halls of Congress, the fight will go on without me. And I trust so many of my colleagues to be strong on this front while I move on to one of the many other battlefields -- because we have an entire culture that has to change and we see it in stark clarity today. The forces of revenge by a bitter, jealous man, cyber exploitation and sexual shaming that target our gender and a large segment of society that fears and hates powerful women have combined to push a young woman out of power and say that she doesn't belong here.

Yet a man who brags about his sexual predation, who has had dozens of women come forward to accuse him of sexual assault, who pushes policies that are uniquely harmful to women, and who has filled the courts with judges who proudly rule -- judges who proudly rule to deprive women of the fundamental right to control their own bodies, sits in the highest office of the land. And so today, as my last vote, I voted on impeachment proceedings. Not just because of corruption, obstruction of justice, or gross misconduct. But because of the deepest abuse of power. Including the abuse of power over women. Today as my final act, I voted to move forward with the impeachment of Donald Trump on behalf of the women of the United States of America. We will not stand down. We will not be broken. We will not be silenced. We will rise and we will make tomorrow better than today. Thank you, and I yield back the balance of my time for now, but not forever.

The call may not have prompted Hill's use of the term — she might have used it anyhow. But it makes sense that these two powerful women are simpatico in their stand against this nature of abuse of women. So, Rep. Hill was exploited, and somehow she is the one made to pay the price with resignation. Sounds like life as a woman Washington, D.C. to me.

Google researchers claim to have achieved a major milestone in computer science known as "quantum supremacy." Google scientists explain their breakthrough in a research paper, a copy of which was obtained by Fortune, that was...
Fortune
09.20.19

Hong Kong Chief Executive Carrie Lam folded in September, promising to withdraw the divisive extradition bill that had galvanized protests across the financial center, and has lasted over half a year. But the furor rages...
Fortune
09.17.19

Coastal cities such as New York and Miami, as well as cities such as Washington, D.C. that are near coasts, are in trouble. Scientists studying the melting of Greenland’s ice have made a deeply worrying...
Fortune
01.22.19

A few weeks ago, the Democratic National Committee formally acknowledged what has been evident for quite some time: Nonreligious voters are a critical part of the party’s base. In a one-page resolution passed at its...
FiveThirtyEight
09.18.19

After Democrats gained control of the House in the midterm elections, President Donald Trump repeated his long-running statement that he wouldn't release his tax returns because they were under audit, making false claims in the...
FactCheck.org
11.09.18

Every step of the way, the president has lied. Proving once again that putting her on TV provides no informational value to the viewers, Kellyanne Conway appeared with CNN's Chris Cuomo Thursday night and spent...
Alternet
12.13.18

This is a rush transcript. Copy may not be in its final form. AMY GOODMAN: This is Democracy Now! I’m Amy Goodman, with Juan González. JUAN GONZÁLEZ: Well, we’re spending the rest of the hour...
Democracy Now!
09.04.19