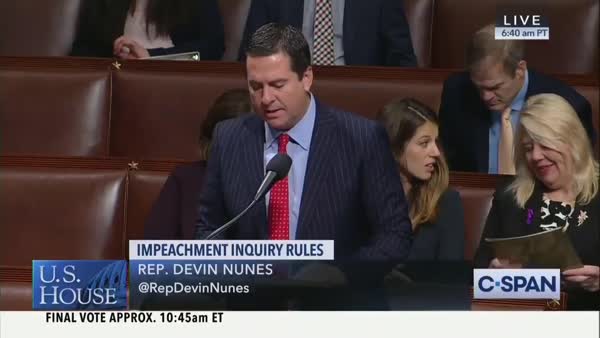 Surprising no one who paid attention to Fox News Wednesday, ranking member of the House Intelligence Committee Devin Nunes took to the House floor to denounce the investigation into Donald Trump's abuses of power and misconduct as a "cult."

"What we're seeing right now from Democrats on the intelligence committee down in the SCIF right now is like a cult," Nunes said (on the official House record). "These are a group of people loyally following their leader as he bounces from one outlandish conspiracy theory to another."

"And the media are the cult followers, permanently stationed outside the committee spaces, pretending to take everything seriously because they, too, support the goal of removing the president," he added.

I'm thinking about the media gathered every day on the South Lawn waiting for another yellicopter session and shaking my head a bit at that last part. But I digress.

Rep. Jackie Speier knows a thing or two about cults, having survived being shot and left for dead by the Jim Jones cult. Suffice it to say, she was not going to take that kind of a slam from Nunes sitting down. She took to Dear Leader's favorite communication medium to smack him down.

(Yes, I know she misspelled despicable, but the point was made nonetheless)

Clearly the "cult" moniker is a new Big Lie, intended to project onto Democrats what Republicans themselves are doing. We heard it from Nunes stenographer Lee Smith on Fox Business yesterday and have heard it repeated on Fox News.

Nunes knows this much: Repeat the lie often enough and people believe it as fact. It's one of the psychological control devices cult leaders use.

Monthly injections of long-acting medication can replace the daily pill dosage for HIV patients, according to two studies involving over 1,000 people around the world. Daily pills can prevent the HIV virus from replicating, but...
Fortune
03.07.19

Iranian airline Mahan Air has been barred from operating in Germany over fears that it is being used for military and terrorist purposes by Iran’s Revolutionary Guards, reports Reuters. It follows a July 2018 warning...
Fortune
01.21.19

UPS said Tuesday it began using unmanned drones to transport medical samples at a North Carolina hospital system, part of its longer-term plan to incorporate drones into its delivery of supplies and samples to medical...
Fortune
03.26.19

Joe Biden vowed to roll back the tax cuts passed under Donald Trump as he and nine other Democrats opened up a second night of debates with a series of attacks on the president, setting...
Fortune
06.27.19

Council of elders. Speaking of Ginni Rometty, she is joining the business advisory board for the U.S. Commerce Department’s National Council For the American Worker, which was established via executive order by President Donald Trump...
Fortune
02.14.19

As Tales of the Cocktail attendees sauntered through the hallways of New Orleans’s Royal Sonesta Hotel in search of their next drink, a room full of hospitality professionals anticipated what a panel of their peers...
Fortune
08.10.19

My colleagues and I have just wrapped up this year's Brainstorm Tech conference in the dry, mountain air of Aspen, Colo., and I am back to soaking up the ample humidity of New York City....
Fortune
07.20.19