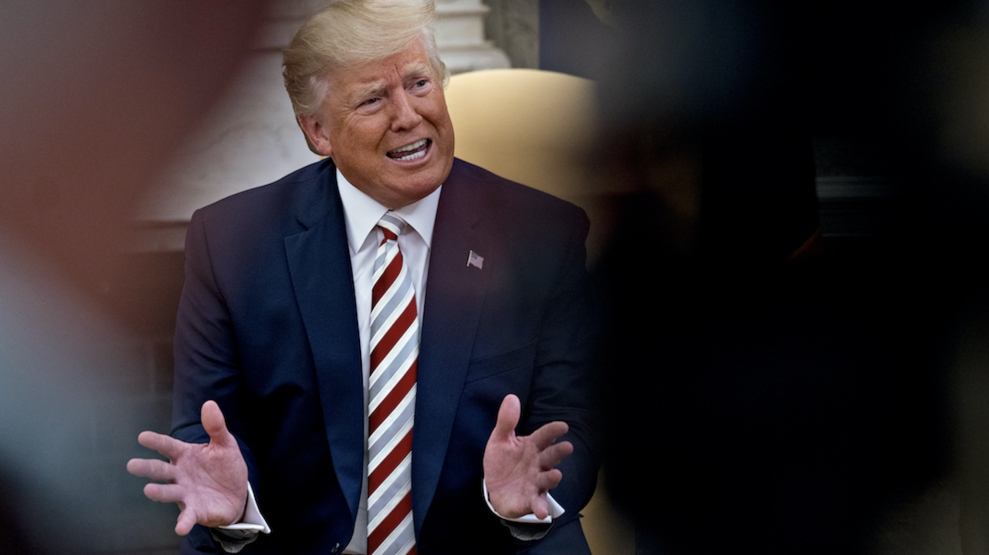 President Donald Trump has tweeted seven times in the past month that Americans should “READ THE TRANSCRIPT!”

It’s an odd demand considering many people did, in fact, read the White House’s reconstruction of his now-infamous July 25 phone call with Ukrainian President Volodymyr Zelensky, and it was widely viewed as highly damaging for the president. The document also featured several curious ellipses, which a top Ukraine expert with firsthand knowledge of the conversation told investigators this week marked the omission of key details related to Trump’s demands for an investigation into his political enemies. According to the New York Times, that revelation didn’t “fundamentally change lawmakers’ understanding of the call,” but it does further undermine Trump’s insistence that the document somehow exonerates him.

“This is over a phone call that is a good call. At some point, I’m going to sit down, perhaps as a fireside chat on live television, and I will read the transcript of the call because people have to hear it.

“When you read it, it’s a straight call.”

In the same interview, Trump floated the idea of selling t-shirts emblazoned with the line.

I personally endorse the roaring, fireside chat. I just ask that Trump wears the t-shirt when he does it.

Nearly 200 producers of Prosecco in Italy make a rosé sparkling wine. But there’s a catch: They cannot legally call it Prosecco. That may be changing soon. Producers are lobbying the Prosecco DOC Consortium and...
Fortune
07.21.19

Bayer was ordered to pay more than $2 billion in damages to a California couple that claimed they got cancer as a result of using the company’s Roundup weedkiller for about 30 years. It’s the...
Fortune
05.13.19

A New York clinical trial will study the effects of the cannabis compound cannabidivarin, or CBDV, on patients with autism, according to a report from CNN. The study at the Montefiore Medical Center will examine...
High Times
09.30.19

President Donald Trump complains that large corporations, such as Amazon.com Inc., are shirking their tax responsibilities. Yet for at least a decade, Trump paid none or very little in federal income taxes by exploiting some...
Fortune
05.07.19

The row between Dolce & Gabbana and China continues. Just days after the Italian fashion house was forced to cancel a fashion show in Shanghai following accusations of racism, the fallout has grown. A number...
Fortune
11.23.18

This is a rush transcript. Copy may not be in its final form. AMY GOODMAN: This is Democracy Now! I’m Amy Goodman. The United Nations is calling for the protection of the Amazon amidst fears...
Democracy Now!
08.23.19

Democratic Gov. Jay Inslee of Washington directed health officials on Friday to ban the sale of all flavored e-cigarettes and vaping products in the state. In an executive order, the governor called on the state...
High Times
09.27.19