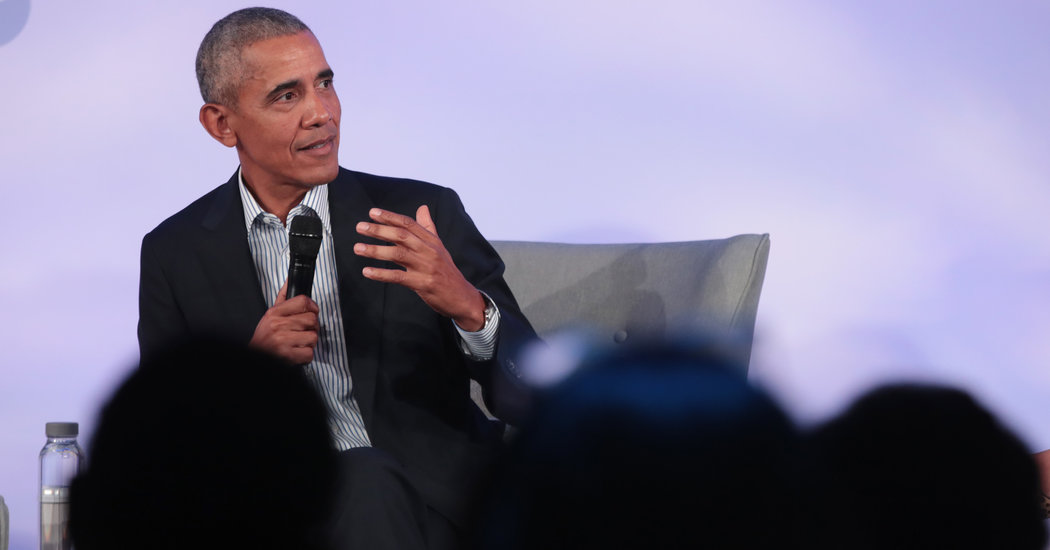 Former President Barack Obama made a rare foray into the cultural conversation this week, objecting to the prevalence of “call-out culture” and “wokeness” during an interview about youth activism at the Obama Foundation summit on Tuesday.

For more than an hour, Mr. Obama sat onstage with the actress Yara Shahidi and several other young leaders from around the world. The conversation touched on “leadership, grass roots change and the power places have to shape our journeys,” the Obama Foundation said, but it was his remarks about young activists that have ricocheted around the internet, mostly receiving praise from a cohort of bipartisan and intergenerational supporters.

“This idea of purity and you’re never compromised and you’re always politically ‘woke’ and all that stuff,” Mr. Obama said. “You should get over that quickly.”

“The world is messy; there are ambiguities,” he continued. “People who do really good stuff have flaws. People who you are fighting may love their kids, and share certain things with you.”

Mr. Obama spoke repeatedly of the role of social media in activism specifically, including the idea of what’s become known as “cancel culture,” which is much remarked upon, but still nebulously defined. It tends to refer to behavior that mostly plays out on the internet when someone has said or done something to which others object. That person is then condemned in a flurry of social media posts. Such people are often referred to as “canceled,” a way of saying that many others (and perhaps the places at which they work) are fed up with them and will have no more to do with them.

[What’s cancel culture really like? Ask a teenager. They know.]

Mr. Obama talked about conversations he’s had with his daughter Malia, who is a student at Harvard with Ms. Shahidi.

“I do get a sense sometimes now among certain young people, and this is accelerated by social media, there is this sense sometimes of: ‘The way of me making change is to be as judgmental as possible about other people,’” he said, “and that’s enough.”

“Like, if I tweet or hashtag about how you didn’t do something right or used the wrong verb,” he said, “then I can sit back and feel pretty good about myself, cause, ‘Man, you see how woke I was, I called you out.’”

Then he pretended to sit back and press the remote to turn on a television.

“That’s not activism. That’s not bringing about change,” he said. “If all you’re doing is casting stones, you’re probably not going to get that far. That’s easy to do.”

The audience erupted in applause, which was echoed by conservative pundits like Ann Coulter.

Tomi Lahren, a conservative political commentator, said on “Fox & Friends” on Wednesday that Mr. Obama’s comments made him look like “the voice of reason” and that “that’s when you know the Democratic Party has gotten this bad.”

“What’s really nice to hear is Barack Obama standing up for our rights and our values of the First Amendment,” Ms. Lahren said. “Just remember that we used to think Barack Obama was bad.”

Tulsi Gabbard, a Democratic presidential candidate and a congresswoman from Mr. Obama’s home state of Hawaii, seized on his words as a campaign message for her supporters.

“In a nutshell, Obama is saying we all need a little more aloha spirit,” she tweeted. “Being respectful & caring for one another. Not being so quick to judge. Not seeing everything as black/white. I hope you’ll join me in bringing the spirit of aloha to the White House.”

Others called out the 44th president for being “paternalistic.”

Michael Arceneaux, the author of “I Can’t Date Jesus: Love, Sex, Family, Race, and Other Reasons I’ve Put My Faith in Beyoncé,” said he didn’t “need lessons about ‘being woke’ and ‘cancel culture’” in an op-ed for The Independent.

“I am never quite sure if Obama really thinks this naïvely or if he’s trying to convince certain sects of the population — notably young black folks, whom he just loves to lecture — that it’s better to coddle white people about their prejudices with the hopes of growth rather than speak our minds as we see fit,” he said.

Since leaving office in January 2017, the former president has mostly remained out of the public fray. Most of his appearances have focused on discussing the integrity of the political system and similar themes.

Following tradition, Mr. Obama initially refrained from publicly criticizing his successor. But during the run-up to the 2018 midterms, he called President Donald J. Trump a threat to American values while speaking to students at the University of Illinois at Urbana-Champaign.

He has occasionally returned to the campaign trail to rally black voters and, more recently, has been working behind the scenes to advise Democratic presidential hopefuls. But he has yet to make an endorsement.

Quick Take Viral social media posts have revived a false claim regarding a Chicago ID card program. The CityKey cards do not allow noncitizens to vote; that is still illegal. Full Story Before Chicago rolled...
FactCheck.org
03.08.19

Welcome to our final Election Update for the 2018 Senate races! Not much has changed in our forecast since early October: Republicans are still favorites to keep control of the Senate, with a 5 in...
FiveThirtyEight
11.05.18

Quick Take A viral meme has paired old misrepresentations of the Quran with a picture of Rep. Ilhan Omar. Full Story A handful of distorted quotes from the Quran have been circulating on blogs and...
FactCheck.org
03.18.19

For much of the past four decades, North Korea’s nuclear ambitions have focused on a sprawling complex nestled in the mountains north of Pyongyang. All of that could come to an end after President Donald...
Fortune
02.23.19

The Trump administration announced a new rule Monday that would make it harder for documented, low-income immigrants to stay in the country. The so-called public charge rule would penalize immigrants seeking benefits including Medicaid, food...
Democracy Now!
08.13.19

The family of Native American teenager Kaysera Stops Pretty Places is demanding justice after she was found dead in Hardin, Montana, in late August, just two weeks after her 18th birthday. Kaysera was a member...
Democracy Now!
10.10.19

Welcome to Pollapalooza, our weekly polling roundup. Poll of the week It’s that time of year again. Snow is falling, sleigh bells are ringing and Congress still hasn’t figured out how to fund important parts...
FiveThirtyEight
12.14.18