Most 2020 Candidates Have Something In Common: Their Supporters Also Like Warren

The Atlantic
Daily Cartoon: Tuesday, October 22nd Do Soda Taxes Actually Work? Here’s What the Science is Telling Us

At this stage in the Democratic primary, many likely Democratic voters are still considering multiple candidates — and this was true for more than two-thirds of respondents in our poll with Ipsos. Which got us thinking, how many respondents were only considering one candidate?

FiveThirtyEight partnered with Ipsos to conduct a poll, using Ipsos’s KnowledgePanel, that asked respondents who they were thinking about voting for and allowed them to pick multiple candidates (or “someone else,” or no one). And while most respondents in the post-debate round of polling were considering more than one candidate (66 percent of respondents), 33 percent only picked one candidate.<a class="espn-footnote-link" data-footnote-id="1" href="https://fivethirtyeight.com/features/most-2020-candidates-have-something-in-common-their-supporters-also-like-warren/#fn-1" data-footnote-content="

We only looked at who respondents were considering after the debate, so it’s possible that they were previously considering more than one candidate or a different candidate altogether.

And as you can see in the table below, about a fifth of former Vice President Joe Biden’s supporters weren’t considering supporting anyone else, a higher share of exclusive supporters than any other candidate. Likewise, 14.6 percent of Sen. Bernie Sanders’s potential supporters weren’t looking anywhere else.

So what do we make of the fact that such a high share of Biden’s and Sanders’s potential supporters were only considering them? It’s definitely a good sign for their campaigns, as it might be harder for other candidates to win these voters over. But it’s also not the only way to understand the strength of someone’s campaign, especially at this early stage in the primary. If you’re a candidate, getting a lot of voters to at least consider supporting you is important, too, as it means you’re still in the hunt for their vote, and the other candidates on a voter’s list tells you something about what parts of the party your message is appealing to.

Overall, more respondents were considering Biden than Sen. Elizabeth Warren (56.5 to 52.1 percent), but Warren actually shares a lot of potential supporters with the other candidates. Take the rest of the top five candidates — Biden, Sanders, Sen. Kamala Harris and South Bend, Indiana, Mayor Pete Buttigieg. The lion’s share of voters who were considering each of those four were also considering Warren — even though Biden had more total potential supporters. Sanders was also being considered, but the percentage of respondents who also chose him wasn’t as large. 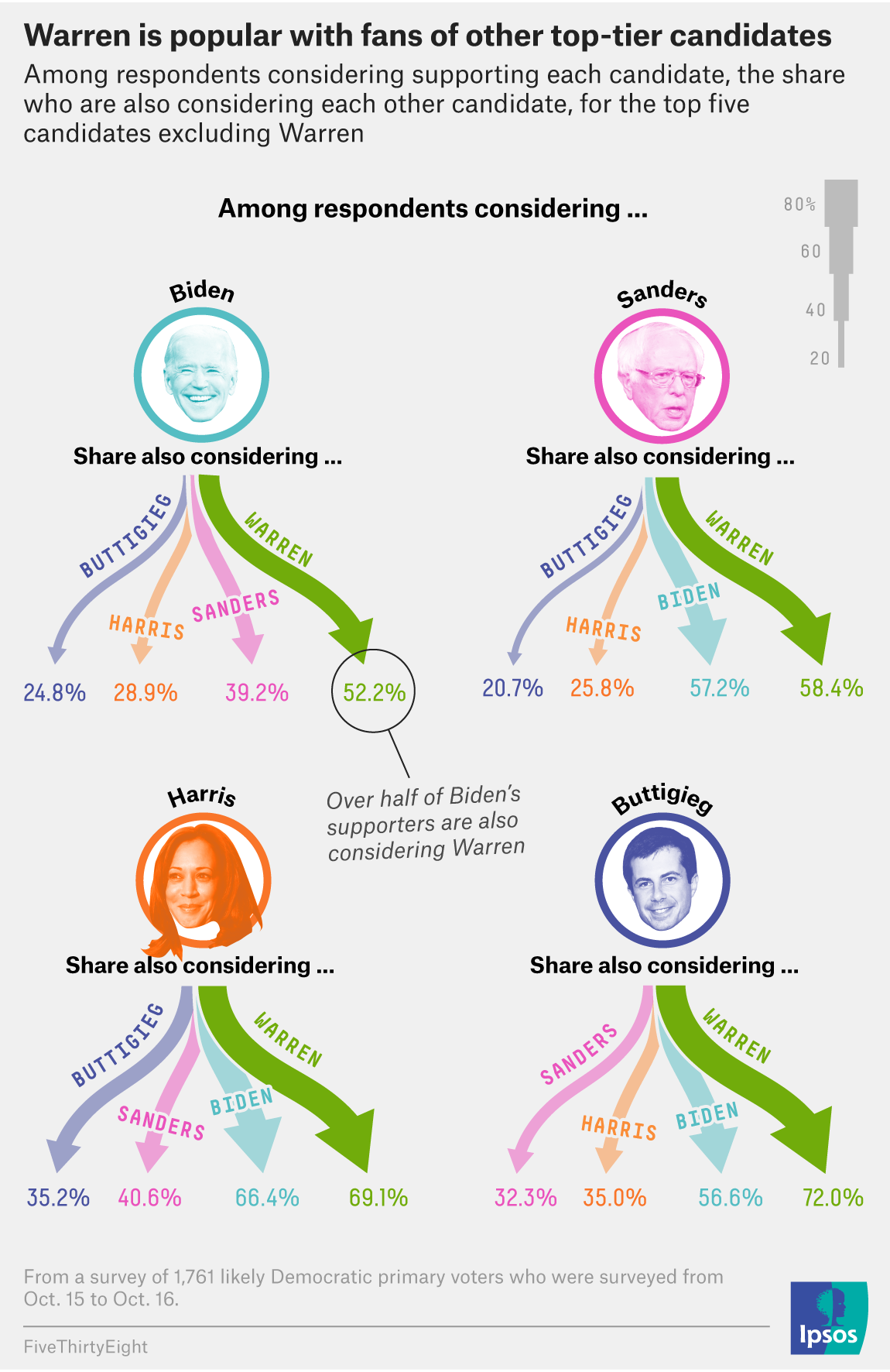 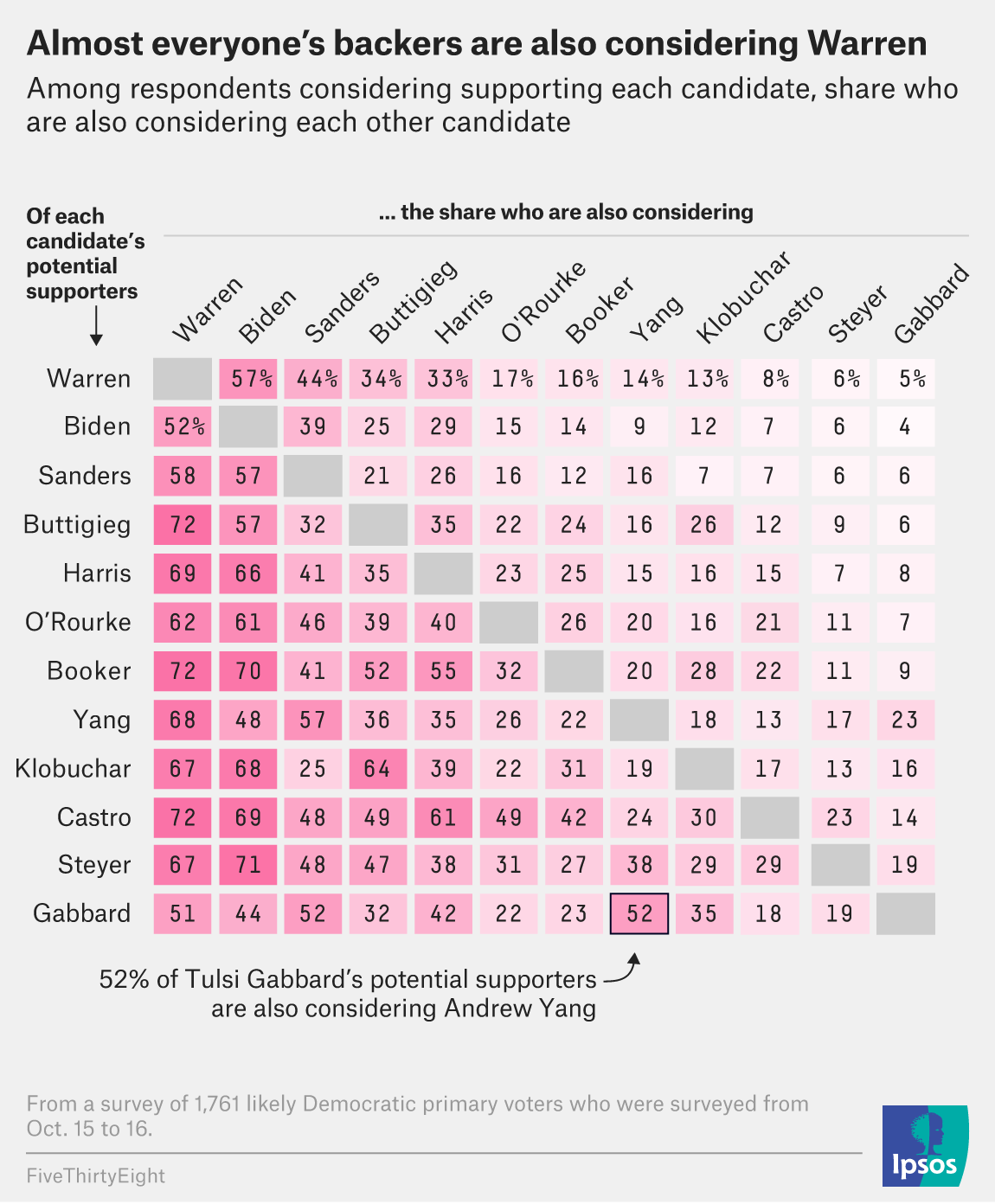 Senator Bernie Sanders introduced a new Medicare for All proposal, acting to keep health-care policy at the center of the race for the 2020 Democratic presidential nomination and marshaling support from four White House rivals...
Fortune
04.10.19

The House of Representatives approved a thorough voting reform act along party lines Friday, a victory for freshman Democrats who ran on an anti-corruption platform. H.R. 1—or the “For the People Act“—moves to expand early...
Fortune
03.08.19

The death toll from the devastating Camp Fire in Northern California has risen to at least 77, as the number of missing people jumped to nearly a thousand. The wildfire—by far the deadliest in California’s...
Democracy Now!
11.19.18

Welcome to a weekly collaboration between FiveThirtyEight and ABC News. With 5,000 people seemingly thinking about challenging President Trump in 2020 — Democrats and even some Republicans — we’re keeping tabs on the field as...
FiveThirtyEight
02.22.19