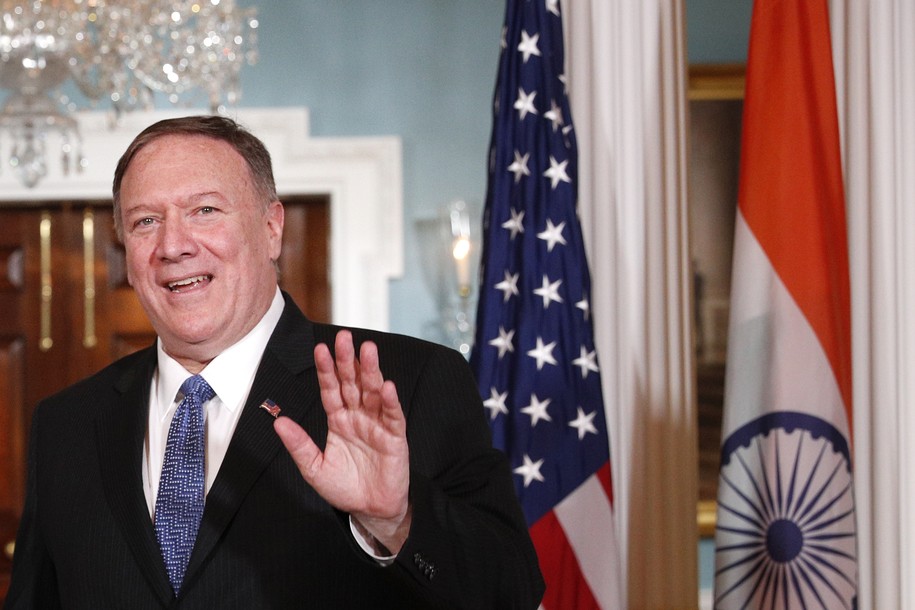 It’s often forgotten that Secretary of State Mike Pompeo attended West Point, where he took a pledge to hold honesty above all. And the person who seems to forget it most often is Mike Pompeo.

The Washington Post reports that Pompeo appeared on Fox News Wednesday evening not only to profess his support for an entire series of definitively debunked, never-made-any-sense-to-begin-with conspiracy theories—such as American company CrowdStrike ferrying a secret “missing” DNC server to Ukraine, and the Steele dossier actually being written by a Ukrainian hired by Hillary Clinton. Pompeo refused to condemn any of the things that Trump was asking Ukrainian President Volodymyr Zelensky to investigate, even though they aren’t just false—they are genuinely bizarre.

Then Pompeo made his own contribution to the Hall of Ludicrous by adding a new conspiracy theory, one that involves President Barack Obama: “I couldn’t tell you why, I couldn’t answer if it’s because of Hunter Biden, that Barack Obama and Vice President Biden didn’t give weapons to Ukraine. They’ll have to answer for that. Maybe -- maybe I just don’t have the full story.”

Here’s Pompeo—Secretary of State Pompeo—suggesting that Ukraine didn’t receive military aid from the Obama administration. Except it received $1 billion in aid. And, unlike Trump, Obama did not delay that aid for a personal political favor or send his personal attorney to Kyiv to badger officials into repeating conspiracy theories. Pompeo is blaming a failure to provide assistance that never happened on a scandal that never was. And he knows that he does have the full story—he just doesn’t like it.

But maybe Pompeo is talking about the bipartisan decision to restrict offensive weapons sales to Ukraine over concerns that the struggle in Ukraine could become a proxy war between the U.S. and Russia. A bipartisan concern that was written into the language authorizing military assistance. If that’s the case, maybe he should consider something that was not a conspiracy theory—that Donald Trump stepped in to remove that idea from the Republican platform.

Mario Ramos of I Bud You, Inc. spent one year and 20 days in jail for growing 226 plants, also known as a non-violent cannabis crime. A multi-decade advocate and activist, he wrote us this impassioned...
High Times
12.14.18

Some rank-and-file congressional Democrats favor starting impeachment proceedings against President Trump. Even Democrats who don’t favor impeachment, such as House Speaker Nancy Pelosi, have suggested that Trump’s behavior could be impeachment-worthy, pointing to his administration’s...
FiveThirtyEight
05.15.19

Do You Buy That… Impeachment Will Energize Trump’s Base And Boost Him In 2020? | FiveThirtyEight Skip to main content Nate Silver is the founder and editor in chief of FiveThirtyEight. @natesilver538  Get us...
FiveThirtyEight
10.07.19

With just four days to go, it's time to shift that enthusiasm to the ground, and help these campaigns Get Out the Vote. If you live in Virginia, or Texas, or Mississippi, you can volunteer...
Daily Kos
11.01.19

Welcome to The Spin Cycle, a semi-regular look at how the impeachment inquiry is being sold to the American public by Washington-types — both those who are looking to oust the president and those looking...
FiveThirtyEight
10.11.19

Immigrant detainees say they have been forced to work for as low as one dollar per day in detention facilities—and some say they never got paid at all, as reported by Jerry Iannelli at Miami New Times. Now,...
Daily Kos
10.31.19

If Republicans Ever Turn On Trump, It’ll Happen All At Once

How Could Impeachment Affect The Democratic Primary?

Will Kurt Volker Define Trump’s Role in the Ukraine for Impeachment...

On Being Seven Years Pharmaceutical And Cancer-Free

The Media Mentioned Biden More Than All The 2020 Primary Candidates...

How A Big Enough News Story — Like Impeachment — Could...

A reminder for Lindsey Graham: Hearsay was key to the last...