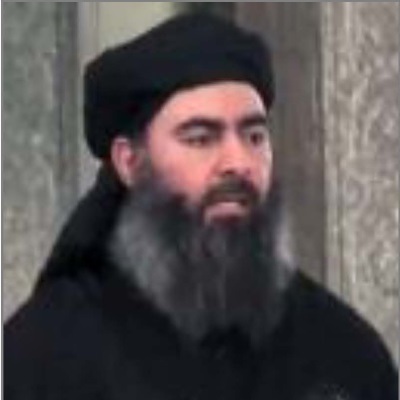 Various memes circulating online falsely claim that Abu Bakr al-Baghdadi, the Islamic State leader who recently died during a U.S. raid, had been released from U.S. military custody under President Barack Obama. He was actually released in 2004, under President George W. Bush.

Misinformation quickly followed the death of the Islamic State leader known as Abu Bakr al-Baghdadi, who killed himself after being cornered by U.S. forces at a compound in northern Syria.

On the same day President Donald Trump announced al-Baghdadi’s death, memes flooded Facebook with the claim that the terrorist leader had been freed from U.S. military custody in 2009 by former President Barack Obama. Another popular meme also claimed that al-Baghdadi had been held at the Guantanamo Bay military prison.

Neither of those things is true.

According to detention records from the U.S. Army, al-Baghdadi, who was detained in Iraq under the name Ibrahim Awad Ibrahim al-Badry, was held for about 10 months in U.S. custody. The records show he was captured on Feb. 4, 2004, and released on Dec. 8, 2004, which was during the presidency of George W. Bush.

According to those records, al-Baghdadi was held at Camp Bucca, which was one of three primary prisons operated by the U.S. military in Iraq at the time. Those prisons held thousands of detainees, mixing together religious extremists and moderates. Maj. Gen. Douglas Stone, who took command of the prisons in 2007, feared that they had become “hotbeds for ‘jihadists,'” according to a RAND corporation study of U.S. detainee operations since World War II.

Bucca, in particular, developed a reputation for fostering extremist recruitment.

“What had ended up happening was you had a witch’s brew, a toxic brew, of hardcore Jihadis [and] people who hadn’t done anything, but they were there nonetheless, and were, thus, radicalized,” Ali Khedery, a special assistant to five American ambassadors in Iraq and a senior advisor to three U.S. generals, said in a documentary about the rise of the Islamic State. “It became the perfect incubator for transnational Jihad,” he said.

One Iraqi prisoner who met al-Baghdadi at Camp Bucca, and later talked extensively to the Guardian newspaper, said, “If there was no American prison in Iraq, there would be no IS now. Bucca was a factory. It made us all. It built our ideology.”

In the decade between leaving Bucca and declaring himself the leader of the Islamic State in 2014, al-Baghdadi finished his Ph.D. in Quranic sciences in Iraq in 2007 and climbed in the ranks of the terrorist organization that would later form ISIS, according to a timeline of his life compiled by the Wilson Center.

Contrary to the false narrative spread by the memes, the Obama administration designated al-Baghdadi a global terrorist in 2011 in a notice signed by then-Secretary of State Hillary Rodham Clinton. The Department of State offered a $10 million reward for information leading to his capture, which it later increased to $25 million.

Editor’s note: FactCheck.org is one of several organizations working with Facebook to debunk misinformation shared on social media. Our previous stories can be found here.

This is a rush transcript. Copy may not be in its final form. JUAN GONZÁLEZ: President Trump traveled to Miami, Florida, Monday, where he gave a major speech calling for regime change in Venezuela, as...
Democracy Now!
02.19.19

The balloon’s form begins with orange skin, small hands, and an amber wave of mane. It escalates the mockery by placing Donald Trump—the ostensible leader of the free world—in a diaper, despite a noticeable thatch...
Fortune
06.08.19

This is a rush transcript. Copy may not be in its final form. AMY GOODMAN: This is Democracy Now! I’m Amy Goodman, with Juan González. JUAN GONZÁLEZ: We turn now to a damning investigation revealing...
Democracy Now!
05.22.19

Election Day in the United States is less than 24 hours away. For those of you who have forgotten or neglected to register to vote, there are a number of states in which all is...
Fortune
11.05.18

CLAREMONT, N.H.—Elizabeth Warren wants the look on her face to be funny. It’s somewhere between stern and confused and disappointed, complete with fists briefly on her hips, like she’s playing a mom in a commercial...
The Atlantic
01.20.19

“Chris, there was an effort by the conservative movement to undermine President Clinton.” Appearing on Fox News Sunday, the former deputy campaign manager of Donald Trump’s 2016 presidential run admitted that conservatives engaged in a “vast...
Alternet
11.25.18

Welcome to The Spin Cycle, a semi-regular look at how the impeachment inquiry is being sold to the American public by Washington-types — both those who are looking to oust the president and those looking...
FiveThirtyEight
10.11.19

A reader sent us a comment regarding the escalating U.S.-China trade dispute. In the FactCheck Mailbag, we feature some of the email we receive. Readers can send comments to editor@factcheck.org. Letters may be edited for...
FactCheck.org
05.15.19