The Democratic field for the 2020 presidential election is already crowded, with about a dozen declared and likely candidates, and several more waiting in the wings.

Most are running on similar platforms, promising a reversal of Donald Trump’s climate change–denying policies, better wages for the middle class, expanded healthcare benefits, and electoral reform that would beat back the influence of dark money. But several also have a four-legged secret weapon—a dog.

Trump is the first US president in more than 100 years not to have a dog in the White House, and Democratic candidates who do have one are flaunting their dog ownership, a crowd-pleasing way to put more distance between themselves and the president.

Tapping into America’s deep and growing love of dogs is a politically savvy move. About 68% of all American homes have a pet, the American Pet Products Association reported last year, up from 56% three decades ago, and 62% of all homes have a dog. Dog culture is everywhere, from Twitter account Breitbark News  (Home of the #AltBite) that pens dog-based parodies of political events to the televised Philadelphia’s National Dog Show, which drew some 20 million viewers in November.

The Massachusetts Senator’s golden retriever hit the campaign trail with her last month, when Warren introduced the “two guys” her life, Bailey and her husband Bruce:

Warren named Bailey after the main character George Bailey in the film It’s a Wonderful Life, she said when she got the new puppy as a surprise gift from her husband last summer. “We named him after George Bailey, the community banker in It’s a Wonderful Life — a guy who was decent, determined & saw the best in people,” Warren wrote. “I always thought the role of GB was written for a Golden Retriever, but Jimmy Stewart did a nice job with it.”

Buttigieg and his husband Chasten Glezman already have another rescue dog, Truman, who is dubbed the “First Dog of South Bend.” Truman stars in a Facebook video about the city’s dog parks, and Buttigieg’s emphasis on investment in parks:

The New York senator announced her family had the new Labradoodle puppy in July of 2017 on Twitter.

While Maple is mentioned in Gillibrand’s Twitter bio, she hasn’t been featured on the campaign trail. Yet.

The former vice president hasn’t officially entered the race, but he’s certainly got the dog for it (and the name recognition—Biden was voters’ favorite candidate in recent polls). Biden adopted Major, a German Shepherd, from the Delaware Humane Association in November after fostering the puppy for months. Major was part of a litter that was exposed to toxic chemicals before they were brought to the shelter, but is in fine health now Delaware Online reports. Biden wanted a new puppy to be a companion to his elderly dog, Champ, another German Shepherd.

The human association distributed the “official adoption photo” of Biden and an incredulous-looking Major in November: 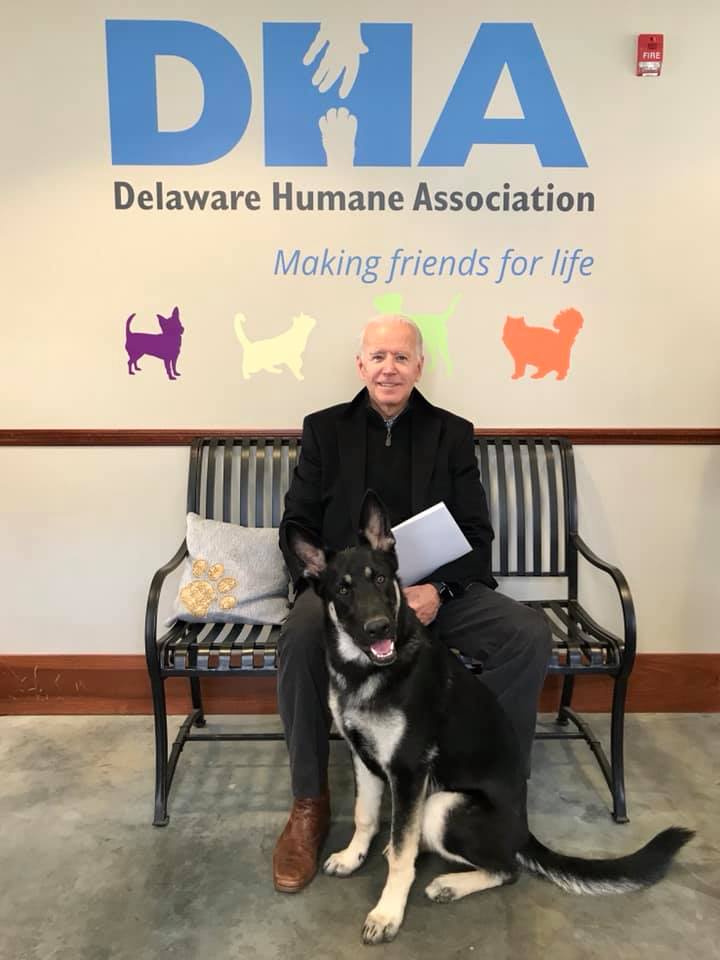 Can you believe it?

The former Texas Congressman also has not entered the race, but his black dog was featured during his 2018 battle with incumbent Senator Ted Cruz:

O’Rourke mentioned Artemis several times in his letter to supporters after he lost to Cruz; earlier he shared a Facebook broadcast of him and his family picking up runaway dogs from the side of the road in Texas. O’Rourke also has a second black dog named Rosie (and a cat named Silver), who he cheered on social media on National Pet Day: 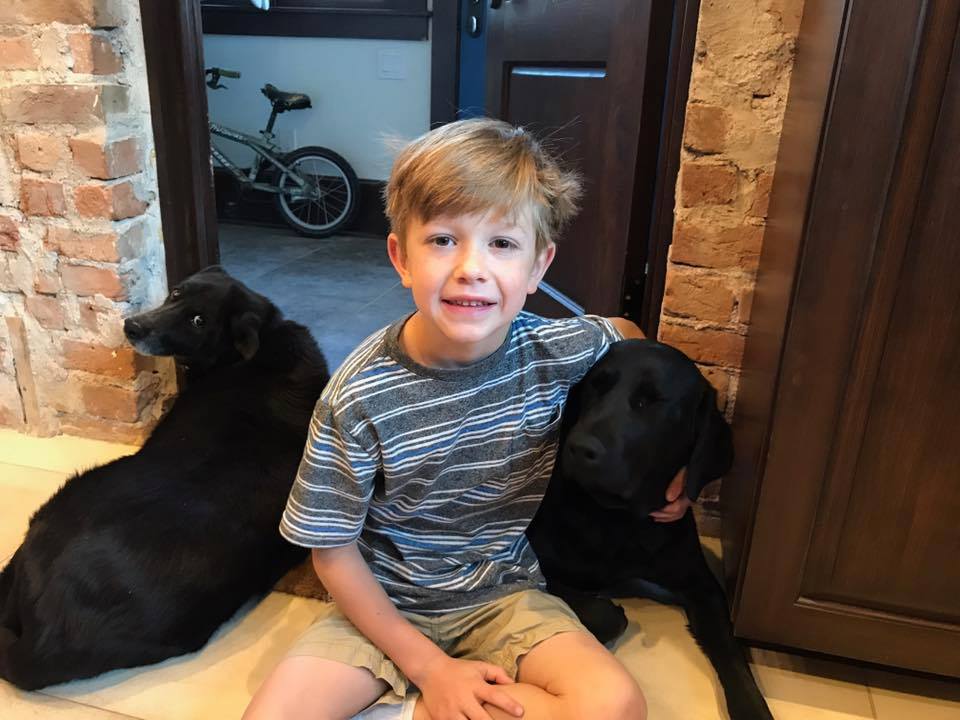 O’Rourke spent at least as much time in the 2018 campaign cuddling dogs as he did babies.

New Jersey senator Cory Booker does not have a dog, he said in response to a question from an 11-year-old boy on a campaign stop in Cedar Rapids, Iowa. But he plans to get one to live with him in the White House if he is elected, he added to cheers from the crowd.

As mayor of Newark, Booker famously rescued a freezing dog left outdoors in the winter.

Kamala Harris, the California senator, is an enthusiastic tweeter of doggy things, and the supporter of animal protection bills, but has not introduced the public to any dogs of her own. Vermont senator Bernie Sanders did not have a dog during the last presidential race, and doesn’t seem to have gotten one since. Neither Amy Klobuchar, the Minnesota Senator, nor Julian Castro, the former Housing Secretary, nor Tulsi Gabbard, the Hawaii Congresswoman, have mentioned owning dogs during the early days of the race. Howard Schultz mentions his family’s love of dogs in his bio, but hasn’t during his exploratory presidential bid, while Mike Bloomberg doesn’t really seem to care for them at all.

Candidates who are trotting out their dogs are following in a long tradition. Herbert Hoover was the first presidential candidate to use his dog for political purposes, to combat a stiff, severe public image, writes Jennifer Boswell Pickens, a historian and author of Pets at the White House. He released a photo of him holding his German Shepard “King Tut” begging for votes during the 1928 election, which he later won. 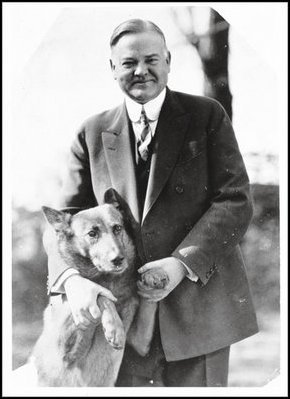 Honey bees are capable of understanding complex arithmetic, according to a new study published Wednesday. Scientists discovered that bees can “learn to use blue and yellow as symbolic representations for addition or subtraction,” according to...
TIME
02.06.19

Global economic growth is expected to slow down across “almost all major economies” next year, according to Bank of America Merrill Lynch economists who cited the fading impact of Trump administration’s tax cuts in the...
Fortune
12.06.18

In a Guatemalan election marked by fraud and corruption, Lucrecia Hernández Mack is one of just a few new faces in politics sparking hope in the country, after being elected as a legislator in the...
Democracy Now!
06.21.19

Apple did something at its Worldwide Developers Conference (WWDC) 2019 keynote on Monday that it hadn’t done effectively in years: produced a compelling event. Over two hours on Monday, company executives talked about important updates...
Fortune
06.04.19

Hello Kitty isn’t just a much-beloved cartoon character and branding phenomenon. The 45-year-old kitten—or at least Sanrio, the Japanese company behind her—also turns out to be an antitrust violator. That’s according to the European Commission,...
Fortune
07.09.19

Q: Did the Supreme Court rule that it is illegal to take the oath of office with anything but the Bible? A: No. That is a made-up claim that originated on a self-described satirical website....
FactCheck.org
01.15.19

Halloween is over—and now the real fright begins. The holiday shopping season is here, at least according to retailers and anyone who likes to plan their shopping early and/or likes to take to take advantage...
Fortune
11.01.18

The Aid Groups Who Want No Part of Aiding Venezuela (Dan) The Red Cross, United Nations agencies, and other relief groups recognize the political aspect of delivering humanitarian assistance to Venezuela. Thus, they’ve decided to...
Who.What.Why.
02.19.19