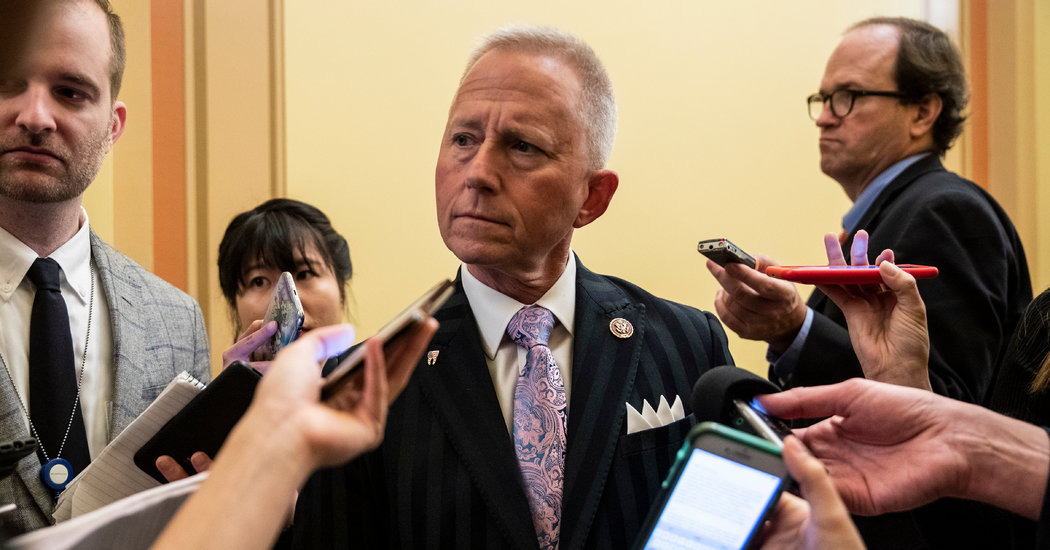 WASHINGTON — Before the House voted on Thursday to endorse the Democratic-led impeachment inquiry into President Trump, two of the most conservative lawmakers in the caucus hazarded a guess as to whether some colleagues might join them in opposing the measure.

In the end, they were right. Democrats on Thursday linked arms and took the plunge into the impeachment pool, as Republicans unanimously opposed the resolution in a 232-to-196 vote. Left on the sidelines were Representative Jeff Van Drew of New Jersey and Representative Collin C. Peterson of Minnesota, both known as consistent, conservative thorns in their party’s side.

Their votes did not come as much of a surprise to Democrats, the vast majority of whom rapidly coalesced behind the resolution that ushered in a new public phase of the process. Both men had publicly aired their concerns that impeachment would be divisive and fruitless.

“I don’t want to move the country further apart,” Mr. Van Drew told reporters after casting his vote. “We could investigate the issues that we’re really concerned about without going further down the impeachment road.”

Predicting a successful impeachment in the House and a failed trial in the Senate, Mr. Van Drew added: “We’ll have the same president and presidential candidate who will be able to say he is exonerated. So I don’t know how much we really gain from that.”

Mr. Peterson said in a statement that he had “some serious concerns with the way the closed-door depositions were run,” and had been inundated with calls from his constituents in the week leading up to the vote.

“Without support from Senate Republicans, going down this path is a mistake,” he said, calling the process “hopelessly partisan.”

The men represent conservative-leaning districts and are the most conservative voters in the caucus, though their similarities generally end there. Mr. Van Drew, a rakishly dressed freshman who represents the southern tip of New Jersey, has won praise from Mr. Trump after an anti-impeachment interview he gave on Fox News, an endorsement that rankled some of his constituents.

Mr. Peterson, the chairman of the Agriculture Committee and a long-serving Democratic veteran known for flying his own plane around his district, has long marched to his own drum. He is widely seen as one of the only Democrats who can hold his seat in a rural column of western Minnesota that supported Mr. Trump by 30 points in 2016.

Mr. Van Drew declined to discuss at length his conversations with Democratic leadership about his vote. “Everybody was gentle,” he said. “Everybody was very fair and evenhanded.”

Republicans jubilantly pointed out the defections, while praising their own united conference.

“Nancy Pelosi, at the beginning of this Congress, said if there’s going to be impeachment, it has to be bipartisan,” said Representative Steve Scalise of Louisiana, the Republican whip. “In fact, the only bipartisan vote today was against impeachment.”

Representative Justin Amash of Michigan, who left the Republican Party this year and became an independent, voted in favor of the resolution. He took to Twitter to chastise “my Republican colleagues.”

“Step outside your media and social bubble,” he wrote. “History will not look kindly on disingenuous, frivolous, and false defenses of this man.”

Asked by reporters if his vote had opened House Democrats to attacks from Republicans like Mr. Scalise, Mr. Van Drew gently shook off the question.

“I don’t think that’s my responsibility,” he said. “People should vote on what’s in their heart and what they believe is right. That’s what I’ve always done.”

This is a rush transcript. Copy may not be in its final form. AMY GOODMAN: I wanted to play the response of Vermont Senator Bernie Sanders, who also gave a response. I mean, the Democratic...
Democracy Now!
01.09.19

On Friday night, President Trump’s physician said the President is in “very good health” and is expected to remain so. The details of Trump’s health were announced after the President’s annual exam in a memo...
TIME
02.09.19

Welcome to Pollapalooza, our weekly polling roundup. Poll(s) of the week The longest government shutdown in U.S. history has passed the one-month mark, and the latest polls show that the share of Americans who blame...
FiveThirtyEight
01.25.19

After two weeks of reversals and uncertainty, there won’t be a question about citizenship on the 2020 census after all. This is a victory for opponents of the question, as social scientists and civil rights...
FiveThirtyEight
07.15.19

Quick Take A photo of a woman protesting Brett Kavanaugh’s nomination to the U.S. Supreme Court has been manipulated to make it look like former Vice President Joe Biden was there and kissed her. Full...
FactCheck.org
05.22.19

This is a rush transcript. Copy may not be in its final form. AMY GOODMAN: This is Democracy Now! I’m Amy Goodman, with Nermeen Shaikh. NERMEEN SHAIKH: We turn now to the United Kingdom. On...
Democracy Now!
05.02.19