Mark Levin Yells At Democrats Because They're Running For President 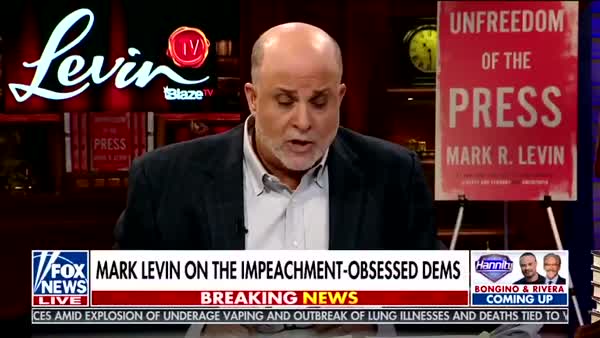 I can't make out each individual word of what Mark is saying, but he is definitely arguing that Joe Biden is interfering with the election process by (a) running for president and (b) supporting an impeachment inquiry.

Please note that Mark Levin mentions nothing about the allegations against Donald Trump. Which would be a hanging offense if it was a Democrat. None of them are mentioning the corroborating, accumulating evidence that Trump demanded an investigation of his political rival from a foreign country in exchange for military aid already allocated by the Congress.

This impeachment hypocrite had a critical role in the disbarrment of Bill Clinton. He should sit down forever.

Of all the Impeachment hypocrites who led the change against Bill Clinton & who are pretending this is illegitimate (Mark Levin, Lindsay Graham, Rush Limbaugh, Mitch McConnell) no one is worse than Joe Digenova, who may have even played a role in why this is a valid Impeachment.

And speaking of hypocrites:

Republican Senators: We can't talk to reporters, thus the public, about impeachment cause we are jurors

Republican Senators: We can have lunch with Trump to talk about impeachmenthttps://t.co/5bHU3dcqOy

Right before Memorial Day, over 75 businesses came to Capitol Hill to demand that their lawmakers establish a national carbon price. The participating business leaders collectively employ over 1 million U.S. workers and represent a...
Fortune
06.01.19

This is a rush transcript. Copy may not be in its final form. AMY GOODMAN: Young climate activists around the world are taking to the streets today for a Global Youth Climate Strike, inspired by...
Democracy Now!
09.20.19

The media salivates over Donald Trump, and the president requires news coverage to feed his ego. So what happens to the American public in this exchange? Face it: it’s been an abusive time, to use...
Alternet
11.15.18

In the latest Fortune 500 list, published Thursday, you’ll find a new record: As of June 1, 33 of the companies on the ranking of highest-grossing firms will be led by female CEOs for the...
Fortune
05.16.19

Huawei’s troubles continue to gather pace. In recent months the telecoms giant has had its CFO Meng Wanzhou arrested in Canada, been barred from the construction of 5G networks in the U.K, Australia, and New...
Fortune
01.17.19

And 4 million people took to the streets of New York City Sunday in the largest LGBTQ pride celebration in history. The demonstration was just one of many taking place across the country and the...
Democracy Now!
07.01.19