Let's Take A Closer Look At Trump's Best Economy Ever 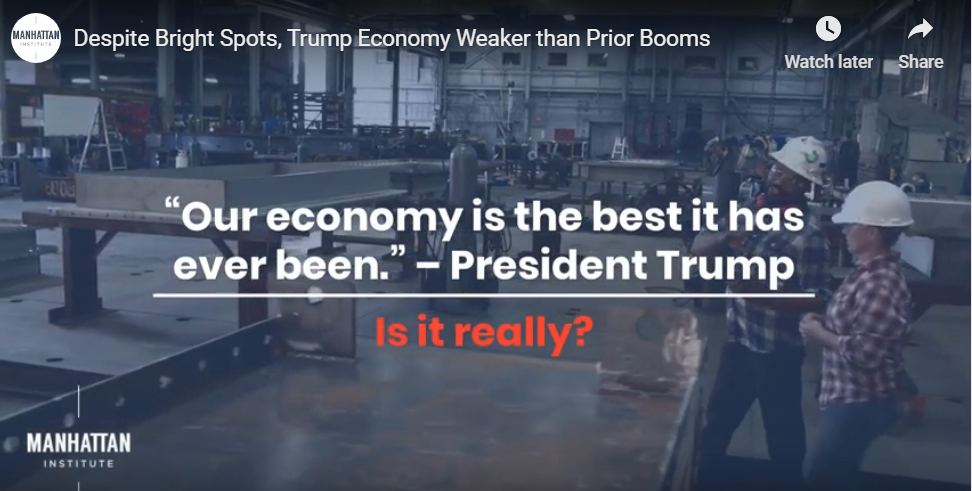 I've been noticing bits and pieces of information that seem ominous for the Best Economy Ever:

“Almost 40% of projected farm profit this year will come from trade aid, disaster assistance, federal subsidies and insurance payments, according to the report, based on Department of Agriculture forecasts. That’s $33 billion of a projected $88 billion in income.” https://t.co/xziDPhxoHl

Trump said coal and steel would be the beating heart of a revived U.S. economy, but the promised renaissance isn’t materializing. The manufacturing slump across the Rust Belt may test whether Trump can retain his appeal to blue-collar workers in 2020. https://t.co/DuJmknvZ7d

JPMorgan is considering selling off the company's Manhattan headquarters and cutting or relocating employees to cities with cheaper costs and better tax benefits to insulate itself from a looming economic downturn. https://t.co/XarP2kWDlf

NEW: Manufacturing is showing major cracks in the Upper Midwest, a development with big implications for the 2020 election. @davidjlynch takes us to Wisconsin to show us what's unfolding. https://t.co/kZDFLc3aKu

The pace of U.S. economic growth slowed slightly to 1.9% in the third quarter as business investment declined, though consumer spending kept growth on track https://t.co/mgtUfuk2PF

U.S. consumer confidence unexpectedly fell to a four-month low as economic expectations dimmed, a warning sign that the consumer spending that’s been propping up the expansion may face challenges https://t.co/zB7JhxWSRt

When the Fed cut rates today for the 3rd time, it brought the real Fed Funds Rate (Fed Funds - Core CPI) down to -0.8%. In the past 2 cycles we didn't see a Fed this easy until...

Signs of an uneven recovery:

➡️ Corporate profits are up 4%

➡️ Corporations spent over $1T in 2018 on stock buybacks

As corporations earn massive profits, executives get huge bonuses and investors are rewarded with stock buybacks, workers’ share of national income plummeted during the recession and has never recovered.

Another sign that our recovery has left millions of Americans behind. pic.twitter.com/zYW92fFtHd

BREAKING: The Federal Reserve has cut its benchmark interest rate for the third time this year to try to sustain the U.S. economic expansion in the face of global threats. But it hinted that it won't cut again at its next meeting. https://t.co/g5p202lUuM

Now we also have a gigantic budget deficit driven in large part by the tax cuts that were supposed to both pay for themselves and permanently goose growth. The tax cuts did neither. https://t.co/cp02A0MUDP

Think back to 2008, and which things you missed the most after the recession. Buy them now, and stock up!

In Georgia, Republican Brad Raffensperger has won the runoff to become the next secretary of state, filling the seat left vacant by Brian Kemp. Kemp, who was declared the winner in Georgia’s contentious gubernatorial race,...
Democracy Now!
12.05.18

Disney received the ultimate Valentine’s Day gift on Thursday when the company was named the “most intimate” brand based on a survey of consumers in the U.S. and the emotions they feel toward hundreds of...
Fortune
02.14.19

Lindsey Graham has two sources of power in Washington: his gavel and his golf clubs. Graham chairs the influential Judiciary Committee, but his frequent phone conversations and golf games with President Donald Trump set him...
Fortune
06.07.19

President Trump said Tuesday he will not cooperate with the congressional impeachment inquiry, pushing the United States toward a constitutional crisis. The White House announced its decision in an eight-page letter addressed to House Democratic...
Democracy Now!
10.09.19

Far-right former Army Captain Jair Bolsonaro was sworn in as president of Brazil on New Year’s Day. His election marks the most radical political shift in the country since military rule ended more than 30...
Democracy Now!
01.02.19

If you’re a longtime reader of FiveThirtyEight, you’ll know that the early stage of the presidential primary process is a tricky one for us to cover. It’s tempting to put a lot of emphasis on...
FiveThirtyEight
03.13.19

At a campaign rally in Wisconsin last night, Trump did not name any of the Democrats targeted by the pipe bombs. Trump called on the media to stop what he called its “endless hostility and...
Democracy Now!
10.25.18

A Cameroonian immigrant died this week in the custody of U.S. Immigration and Customs Enforcement in California. The man, identified as 37-year-old Nebane Abienwi, died on Tuesday after suffering a brain hemorrhage. This comes as...
Democracy Now!
10.03.19