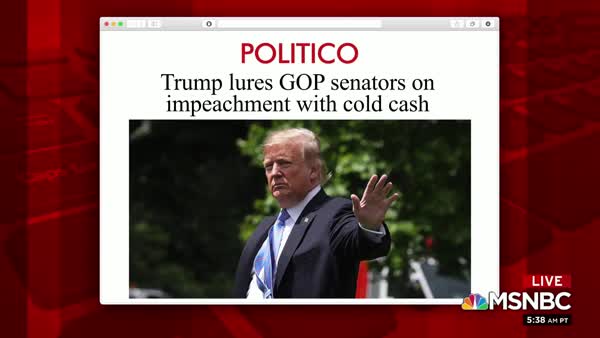 Donald Trump is making sure he has an iron-clad guarantee of a "no" vote from friendly Senate Republicans running for re-election in 2020.

In exchange for a pledge to resist impeachment and removal, Donald Trump is rewarding that behavior with campaign financing. Politico has the story:

President Donald Trump is rewarding senators who have his back on impeachment — and sending a message to those who don't to get on board.

Trump is tapping his vast fundraising network for a handful of loyal senators facing tough reelection bids in 2020. Each of them has signed onto a Republican-backed resolution condemning the inquiry as “unprecedented and undemocratic.”

Conspicuously absent from the group is Maine Sen. Susan Collins, a politically vulnerable Republican who’s refused to support the resolution and avoided taking a stance on impeachment. With his new push, Trump is exerting leverage over a group he badly needs in his corner with an impeachment trial likely coming soon to the Senate — but that also needs him.

It's critical that Democrats continue to remind voters in those races that their incumbent Senator is bought and paid for.

This is a bribe.
Any other American who offered cash to the jury before a trial would go to prison for felony bribery.
But he can get away with it?
Criminal.

Calf brains, pig snouts and beef cheeks: Yuck, right? Not so fast. While the rest of the world has been doing this for centuries, Americans are just starting to catch up when it comes to...
Fortune
02.23.19

If last week was a tough one for U.S. tech stocks, this one starting off in an even uglier fashion. The Nasdaq Composite Index tumbled 3.5% Monday as a long-simmering U.S.-China trade war showed signs...
Fortune
08.05.19

It’s the first day of business for the newly sworn-in 116th Congress, and House Democrats have already held several votes — on a bill to fund the government and a package of rule changes to...
FiveThirtyEight
01.03.19

Little more than a week into his premiership, Boris Johnson has tapped Blair Gibbs, one of the United Kingdom’s leading advocates of cannabis legalization, for a top post as special adviser on crime and justice...
High Times
08.01.19

Sepsis is the leading cause of death to hospitalized patients, but to bring down the sepsis-related mortality rate, prevention and care of other major contributing factors would need to change significantly, according to new research...
Fortune
02.15.19

This is a rush transcript. Copy may not be in its final form. AMY GOODMAN: This is Democracy Now! I’m Amy Goodman, as we look at the wrongful death case against Boeing, after a preliminary...
Democracy Now!
04.05.19

Democrats have a challenging path to capturing the Senate in 2020. Republicans currently have a 53-47 majority, which means that to take control, Democrats will need, at a minimum, a net gain of three seats...
FiveThirtyEight
05.22.19

A delivery of potatoes to a Hong Kong chips factory from France contained a World War I German hand grenade, police say. The device was found Saturday morning at the Calbee snack factory in the...
Fortune
02.03.19