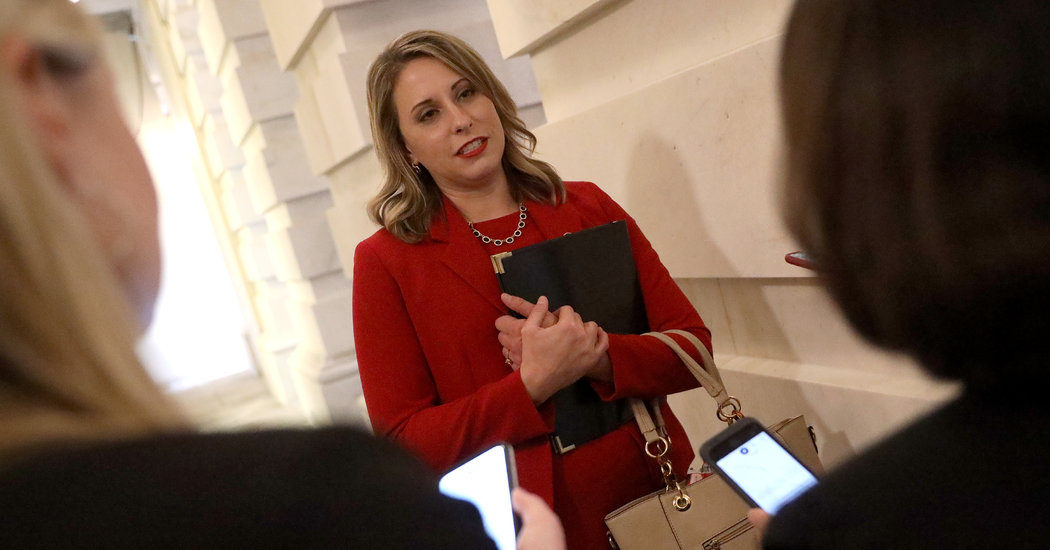 Representative Katie Hill, the first-term Democratic congresswoman who resigned her House seat this week, delivered an impassioned farewell speech on Capitol Hill on Thursday, denouncing “gutter politics” and attributing her resignation to a double standard toward women.

Ms. Hill, who represented a suburban Los Angeles district, said she was resigning because of a harassment campaign that included the online publication of nude photos taken of her without her consent. Her last day is Friday.

Ms. Hill blamed the release of the pictures on Republican operatives and on her husband, Kenny Heslep, whom she is divorcing. The pictures were published by the conservative website RedState and The Daily Mail, and articles from both outlets were widely shared on social media. She said she had also faced a barrage of threatening messages.

“I’m leaving because of a misogynistic culture that gleefully consumed my naked pictures, capitalized on my sexuality and enabled my abusive ex to continue that abuse, this time with the entire country watching,” Ms. Hill said. “I am leaving because of the thousands of vile, threatening emails, calls and texts that made me fear for my life and the lives of the people that I care about.”

Ms. Hill, 32, said Sunday she would resign in the face of an ethics investigation into allegations that she had a sexual relationship with a member of her congressional staff, a violation of House rules that she had denied. The allegation was first reported by RedState and emerged as part of her divorce proceedings with Mr. Heslep.

The House Ethics Committee investigation into Ms. Hill makes her the first representative to be investigated under a rule passed last year amid the #MeToo movement that prohibited members of Congress from having sexual relationships with their staff members. After years of complaints about male lawmakers engaging in sexual harassment, the first casualty of the new House rules is a woman. To Ms. Hill’s critics — including Republicans who want to reclaim her seat in a relatively conservative district — she brought dishonor to her office. But the role of Ms. Hill’s husband and the release of her naked pictures has led her supporters to argue that she is a victim of “revenge porn,” the nonconsensual publication of sexual images.

“I will never shirk my responsibility for the sudden ending of my time here, but I have to say more because this is bigger than me,” Ms. Hill said in her speech. “I am leaving now because of a double standard. I am leaving because I no longer want to be used as a bargaining chip.”

“I’m leaving because I didn’t want to be peddled by papers and blogs and websites used by shameless operatives for the dirtiest gutter politics I’ve ever seen, and the right-wing media to drive clicks and expand their audience by distributing intimate photographs of me taken without my knowledge — let alone my consent — for the sexual entertainment of millions,” she said.

Ms. Hill was seen as a rising star in the Democratic Party and a close ally of Speaker Nancy Pelosi. On Thursday, only a handful of first-term Democratic lawmakers listened to her speech in the otherwise empty House chamber.

When she finished, she embraced all of them: Representative Lauren Underwood of Illinois; Representative Joe Neguse of Colorado, who represented the freshman class in leadership meetings with Ms. Hill; Representative Ayanna Pressley of Massachusetts; and Ilhan Omar of Minnesota.

Before Ms. Hill’s speech, Ms. Pelosi called her “an absolutely outstanding young public servant,” but said she respected her decision to resign.

“I do say to my own children and grandchildren, especially grandchildren, some of these — I don’t know what — what do you call them, appearances on social media can come back to haunt you if they are taken out of context,” she said. “Regardless of any errors in judgment that anyone may have made, it’s shameful that she’s been exposed to public humiliation by way of cyber exploitation.”

Ms. Hill defeated a Republican incumbent, Steve Knight, in November 2018, when Democrats swept the midterm elections powered in part by a surge in female candidates and a deepening unease with President Trump among suburban voters.

It will now be up to the California governor to call a special election to fill her seat, and the race to replace her has already grown crowded and unpredictable: George Papadopoulos, a former aide to Mr. Trump who served two weeks in prison for making false statements to the F.B.I., has filed paperwork signaling his intent to run.

When Ms. Hill arrived in Washington, Ms. Pelosi named her vice chairwoman of the House Oversight and Reform Committee, a high-ranking position for a first-term representative. The panel has played a crucial role in the impeachment inquiry into Mr. Trump.

On Thursday, Ms. Hill said her final act as a member of Congress had been voting in favor of the president’s impeachment.

“Today as my final act I voted to move forward with the impeachment of Donald Trump on behalf of the women of the United States of America,” she said. “We will not stand down, we will not be broken, we will not be silenced. We will rise and we will make tomorrow better than today.”

(TORONTO) — Prime Minister Justin Trudeau fired Canada’s ambassador to China after the envoy said it would be “great” if the U.S. dropped its extradition request for a Chinese tech executive arrested in Canada. Trudeau...
TIME
01.26.19

This is a rush transcript. Copy may not be in its final form. AMY GOODMAN: The Supreme Court is starting a new term today in Washington, D.C. The court will be hearing major cases this...
Democracy Now!
10.07.19

One day after reports emerged that White House officials had pressured immigration authorities to release immigrant detainees into sanctuary cities, President Trump confirmed the shocking proposal, first via tweet and later as he spoke to...
Democracy Now!
04.15.19

Last week, former Vice President Joe Biden was not the Democratic candidate who was mentioned in the most online news stories, marking the first time he has failed to claim that title since at least...
FiveThirtyEight
07.22.19

The first and second Democratic debates have made one thing clear: A number of major policy reforms are on the table, including sweeping proposals on health care and climate change. And many of these ideas...
FiveThirtyEight
08.14.19

Nearly 100 animal rights activists were freed today, after being arrested by police in riot gear for carrying out a rescue mission and protest at the Reichardt Duck Farm in Petaluma, California, which they accuse...
Democracy Now!
06.06.19

In arguing for border wall funding, President Donald Trump claimed — without any evidence — that only 2 percent of those apprehended crossing the border and released pending immigration hearings appear in court. Actually, Trump...
FactCheck.org
01.23.19