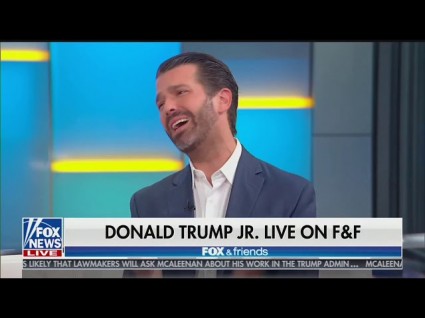 Uday the Stupid aka Donald John Trump Junior opened his mouth and spewed toxic waste across the landscape in order for it to land on Lt. Col. Alexander Vindman while on Fox and Friends Wednesday morning. Clearly they are deeply concerned about the decorated veteran's testimony to the impeachment committees on Tuesday and are pulling out all the stops to discredit him.

“There’s no there there,” Trump Jr. assured viewers. “They do usual thing, they bring in another guy that they believe is beyond reproach. Like they did with Mueller.”

He's a witness to a despicable abuse of power. Mueller wrote a 400-page report about the Trump political enterprise based on facts. Both are beyond reproach.

He goes on to complain that Vindman is "talking to the Ukraine or he wanted to edit the transcript." Note to Junior: It's not THE Ukraine -- Just Ukraine will do. It hasn't been THE Ukraine since the Soviet Union dissolved.

Can we also just say that there is no transcript? It's these kinds of details that turn facts into disinformation, and when you've got a stupid boy like Junior on Trump TV who needs any Russian disinformation campaign anyway?

Kilmeade and Uday go on to make false equivalences with Tulsi Gabbard and Michael Flynn before laying the real smear on Vindman. In the process of defending Tulsi Gabbard, he also outed her as an ally. She is also not a "leftist" as Captain Stupid drives home.

"You only get total absolution if you are a leftist veteran," Uday groused. "Not a veteran, just a leftist. If you’re on their side, you can do no wrong.”

Kilmeade actually had the stones to point out that there's nothing out there which would say Vindman is a leftist, but Junior brushed him off. “Oh yeah, of course, sure," he replied with a rhetorical wave of the hand.

So much nonsense, so little time.

So much interesting here.

Donald Trump Jr. recirculates the insinuation that Vindman was working for the Ukrainians.

Brian Kilmeade hails Michale Flynn, who *was* working for Turkey as a foreign agent.

Trump Jr. lets cat out of bag about Tulsi Gabbard as a Trump supporter https://t.co/X7i7xb8hnD

They don’t seem to get that Tulsi Gabbard is a politician & as such opens herself up to questions & criticism. The Lt. Col. is an NSC employee obeying a subpoena & not willing to purger himself for a compulsive liar. Flynn was breaking FARA laws & struck a plea deal.

I cannot understand why anyone wants to hear with this goon has to say. It's not as if he has ever worked for anything in his life. He's just a guy with a silver spoon in his mouth who opens his mouth frequently and his father's words come pouring out.

By the way, isn't Junior supposed to be running the business? What is he doing on Trump TV spreading disinformation?

This is a rush transcript. Copy may not be in its final form. AMY GOODMAN: This is Democracy Now! I’m Amy Goodman. As the death toll from California’s Camp Fire continues to rise, we end...
Democracy Now!
11.16.18

There’s a perception, flawed as it may be, that college admissions are a zero-sum game. One student gets in, another loses out. That perception is even more acute when it comes to selective institutions, where...
The Atlantic
01.15.19

Hello and happy Monday, readers! I hope you had a wonderful weekend. The school year has just begun—and, with it, concerns about food allergies, which afflict some 5.6 million American children under the age of...
Fortune
09.16.19

Fox News operates through fear. It operates through emotion. There will be many tense and uncomfortable conversations this weekend in America, and throughout the holiday season. Political disagreement may be inevitable at family gatherings, but...
Alternet
11.23.18

In the U.S., their numbers are small but growing fast, and they are growing even faster in other countries. They’re a key part of every automaker’s long-term strategy. After years of anticipation, the market for...
Fortune
08.12.19

This article originally appeared on VICE UK. The bench: not quite a chair, not quite a sofa, but an uncomfortable in-between where people relentlessly ask you for cigarettes. In British culture, benches are for three...
VICE
02.19.19