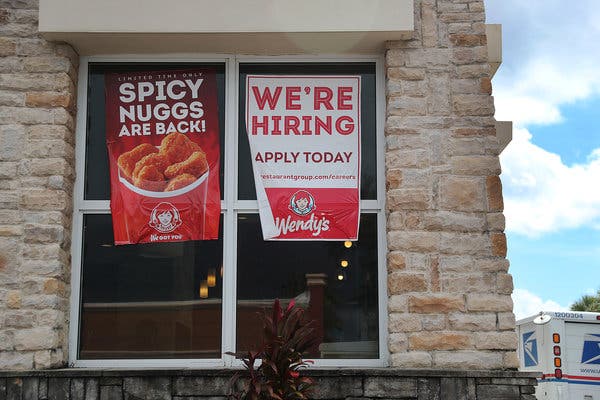 At a Wendy’s in Miami last month.Credit...Joe Raedle/Getty Images

There are three basic stories that employment data have been telling us in the last few months. The October numbers, released Friday, confirm two of them and undermine the third.

The first story: Jobs are plentiful and unemployment low. Most everyone who wants a job can find one. While the unemployment rate ticked up in October to 3.6 percent, that is still near a five-decade low. And it happened because more people joined the labor force, meaning for good reasons rather than bad. The labor force participation rate rose a bit in October.

The best news of all: The share of Americans of prime working age, between 25 and 54, rose to its highest level of this economic cycle, 80.3 percent, from 80.1 percent in September. At its new level, it matches the high point during the mid-2000s expansion, reached in early 2007.

You certainly see nothing in the survey of households on which the unemployment rate is based that would suggest a recession is imminent or underway. So we can count this story as being confirmed by the new data.

The second story: Wage growth is flatlining. For most of the last few years, pay to American workers has been rising at steadily increasing rates. For example, average hourly earnings rose 2.7 percent in 2017, then 3.3 percent in 2018.

But that rate of increase now seems to have leveled off or decreased. The year-over-year rate of growth in wages peaked at 3.4 percent in February and has receded to 3 percent in October, according to the latest numbers.

And it isn’t just this particular measure of wages. On Thursday, the Labor Department released a separate set of data, the employment cost index, that captures what employers must pay in wages, salaries and benefits. By that measure, compensation in private industry rose 3 percent in 2018, and only 2.7 percent in the 12 months ended in September.

So most people can find a job and more people are working, but employers are not having to increase compensation much to recruit and retain people.

This isn’t what economic models suggest should happen. The low unemployment rate should mean that workers are scarce and that employers should need to start paying them more. The deceleration, should it continue, undermines the entire framework by which economic policy is set. But the October numbers leave little doubt that slowing wage growth is the reality in 2019.

Which brings us to the third narrative. It has seemed apparent in the last few months that the rate of job creation is slowing — that employers are not adding to their payrolls at the rate of recent years.

This isn’t necessarily disastrous news at this stage of an economic cycle. Eventually the rate of job creation is constrained by the availability of workers, so over the long run it can rise only as fast as the population of people wanting to work rises — and it has been faster than that in recent years.

But maybe, based on the latest data, that slowdown hasn’t yet arrived after all. Employers added 128,000 jobs, the Labor Department said, but that would have been higher but for two temporary effects. The Census Bureau cut 20,000 temporary workers whose jobs were complete, and a General Motors strike caused the number of jobs in the auto manufacturing sector to temporarily drop by about 42,000.

Adjust for those, and the employers added 190,000 jobs in October, which is not consistent with a job growth slump.

Moreover, the Labor Department revised upward its estimates of job creation in August and September. Add it all up — using an adjusted October number and the revised numbers before that — and the 196,000 jobs per month three-month average is the strongest since February and doesn’t fit with a story of slowing job growth.

Presumably the “strong job growth” story is connected to the “rising labor force participation” story. Employers are managing to keep adding to their payrolls — even without offering very big raises — not by hiring the increasingly scarce unemployed, but by coaxing people who were not looking for a job at all to enter the labor force.

That’s good news for the longer-term growth trajectory of the United States, as more people are connected to the labor force, gaining skills and contributing to G.D.P.

The new numbers support a status quo policy from the Federal Reserve. The job gains are strong enough that the Fed will probably see no need to cut interest rates again this year (barring some abrupt turn in the outlook). But, conversely, the weak wage growth means that there are no apparent inflationary consequences to the tight labor market, so the Fed need not consider rate increases anytime in the foreseeable future.

And politically, to the degree President Trump’s re-election quest will be a referendum on the economy, the question for voters will be which matters more: plentiful jobs, or big gains in pay. Because the first is a reality, and the second is nowhere to be found.

Pinterest filed documents to go public with the Securities and Exchange Commission late Friday, joining other tech-unicorn peers such as Uber and Lyft in what is becoming a crowded IPO pipeline. The social-media company, last...
Fortune
03.22.19

But as the Apollo 11 mission neared the moment of truth, beginning its descent toward the lunar surface, crisis struck. “Audible alarms went off in the spacecraft,” Ahr recalls. "It was very chaotic. It was...
Fortune
07.20.19

“Today, praise be to God, wine was made for the first time from Cape grapes.” These prophetic words, written by Dutch colonial administrator and founder of Cape Town, Jan van Riebeeck, in his diary on...
Fortune
05.04.19

President Vladimir Putin met Pope Francis in the Vatican on Thursday, amid signs of closer ties between the Kremlin and the Roman Catholic Church. The meeting came a day before the Pope is due to hold...
Fortune
07.04.19

In August 2011, the SPDR Gold Shares ETF (GLD) briefly surpassed the S&P 500 SPDR ETF (SPY) as the largest exchange-traded fund in terms of assets. Since then, the investment performance of these two funds...
Fortune
09.29.19

The best improvised music destabilizes expectations. That could happen when a taut groove suddenly dissolves into a free-jazz breakdown, a trick the band Science Fair pulled in a set Saturday night at Winter Jazzfest in...
The Atlantic
01.19.19

Donald Trump’s hardline stance on trade with China—and, now, Mexico—may be rattling the markets and shaking investor confidence. But according to some of the nation’s top economists, the Trump administration’s newly imposed import tariffs will...
Fortune
05.31.19