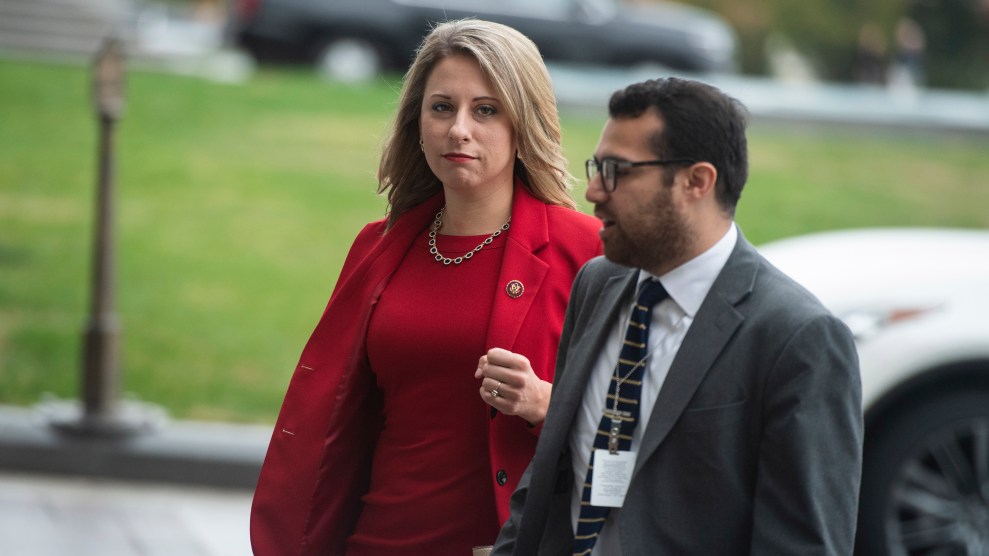 During her resignation speech on the House floor Thursday afternoon, Rep. Katie Hill (D-Calif.) took responsibility for mistakes she had made that helped end her brief career in Congress. But she also denounced the “misogynistic culture” that pushed her out of office while preserving Donald Trump’s presidency.

In recent days, conservative publications have posted nude photos of Hill, which she said were taken without her knowledge. Hill has suggested that the photos were released by her estranged husband, Kenny Heslep, who she says was abusive. She announced her resignation Sunday amid a House Ethics Committee investigation into whether she had an affair with a congressional staffer, an allegation she has denied. Hill has also acknowledged a consensual but “inappropriate” relationship with a campaign staffer. After apologizing to her supporters Thursday, Hill took aim the media outlets that published the photos.

“I’m leaving because of a misogynistic culture that gleefully consumed my naked pictures, capitalized on my sexuality, and enabled my abusive ex to continue that abuse, this time with the entire country watching,” Hill said. “Today is the first time I’ve left my apartment since the photos—taken without my consent—were released. And I’m scared.”

.@RepKatieHill: “I’m leaving because of a misogynistic culture that gleefully consumed my naked pictures, capitalized on my sexuality, and enabled my abusive ex to continue that abuse, this time with the entire country watching.” https://t.co/3FXSzAmGfO pic.twitter.com/Y4IhbHUCyo

Hill noted that, earlier in the day, she cast her final vote—to formalize the ongoing impeachment investigation—”on behalf of the women of the United States.”

“The forces of revenge by a bitter, jealous man; cyber-exploitation and sexual shaming that target our gender; and a large segment of society that fears and hates powerful women, have combined to push a young woman out of power,” she said. “Yet a man who brags about his sexual predation, who’s had dozens of women come forward to accuse him of sexual assault, who pushes policies that are uniquely harmful to women, and who has filled the courts with judges who proudly rule to deprive women have the most fundamental rights to control their own bodies, sits in the highest office of the land.”

.@RepKatieHill just called out the “misogynistic culture” that pushed her out of office—while preserving Donald Trump's presidency.

"Today, as my final act, I've voted to move forward with the impeachment of Donald Trump on behalf of the women of the United States of America." pic.twitter.com/Z4IQVQlzU6

House Democrats are in a bind. The White House refuses to cooperate with their investigations into President Trump and his administration. In response, Democrats have tried to retaliate, most recently taking the first steps toward...
FiveThirtyEight
05.14.19

Students in Washington will now be able to use medicinal marijuana therapies at school with the signing of Ducky’s Bill (House Bill 1095) by Gov. Jay Inslee on Tuesday. Under the law, children who are...
High Times
05.02.19

They say breakfast is the most important meal of the day, and with 24 different brands focused on your morning meal, not many people know more about breakfast than Kellogg’s Steve Cahillane. Fortune’s Polina Marinova...
Fortune
03.19.19

Albums sold on vinyl and cassette both saw a growth in sales according to BuzzAngle Music’s End-Year Report profiling U.S. music industry consumption for 2018. Vinyl sales grew by just shy of 12% from 8.6...
Fortune
01.06.19

The next time one of us runs into Astro Teller, the head of Google’s famed “Moonshot factory,” as he skates by let’s agree to ask him about Sara Spangelo. She’s the aerospace engineer who runs...
Fortune
01.24.19

They won’t be tell-all mistresses or victims of sexual harassment or victims of fraud and aggrieved contractors or pissed off members of the intelligence community. They will be people from Trump’s inner circle. It was...
Alternet
12.15.18

Quick Take The Centers for Disease Control and Prevention is not flying sick migrants from the caravan into the country, as a story that originated on a self-proclaimed “alt-news” website claims. Full Story A viral...
FactCheck.org
12.03.18

President Donald Trump said Thursday that he’s planning a tax cut directed at the middle class that will be announced in the next year. “It will be a very substantial tax cut,” Trump told congressional...
Fortune
09.12.19