How the 19th-century bicycle craze empowered women and changed fashion

FactCheck.org
Droids visit Smithsonian The American backyard as we know it developed after World War II 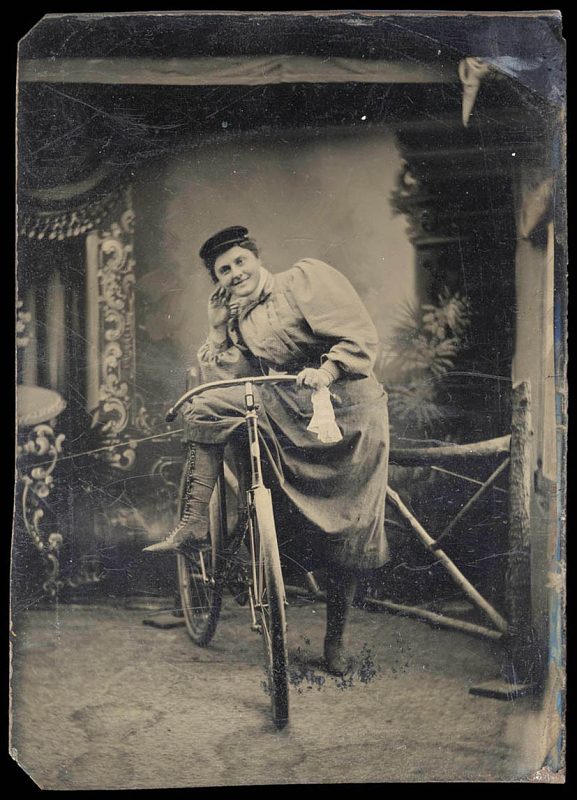 Cyclists across the country proudly posed with their wheels, such as this woman in this 1890s tintype. In doing so, they declared their embrace—and mastery—of the new technology. For many, a bicycle portrait was also a kind of declaration of independence. (National Museum of American History)

At the end of the 19th century, for just a few years, bicycles were all the rage.

The cycling craze got millions of Americans moving in a new way—and women moving away from restrictive domestic spaces and restrictive clothing. But the bicycle changed first.

“The bicycle craze was both a reality and a symbol—a symbol for personal mobility,” says Roger White, curator in the Division of Work and Industry at the Smithsonian’s National Museum of American History.

Bicycles had existed for decades, and some late-1860s models even had shapes similar to modern-day bicycles, but they were made of iron and wood. 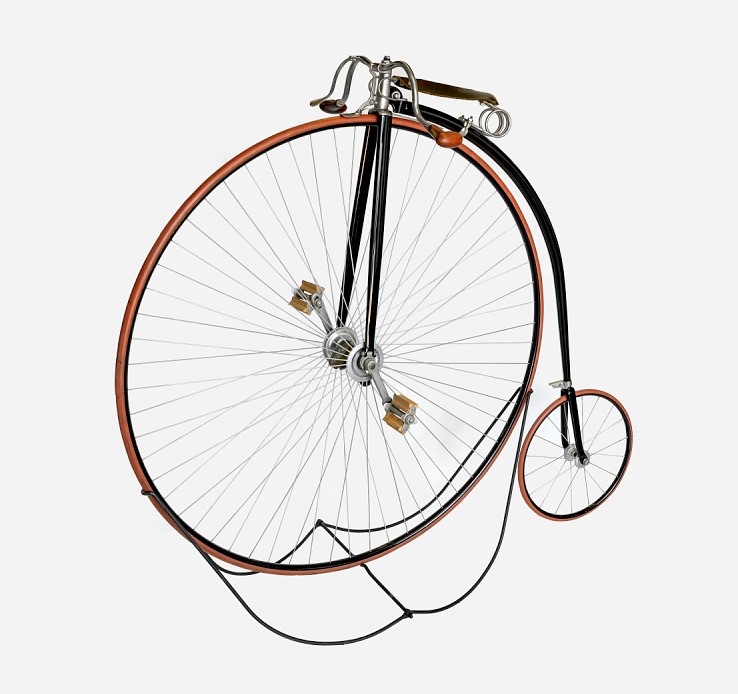 Columbia high-wheel bicycle, 1886, in the National Museum of American History’s collection. Albert Pope and the Pope Manufacturing Company dominated the bicycle market in the 1880s with the Columbia brand of high-wheel bicycles.

High-wheel bicycles became big—in size and popularity—in the 1880s. The large front wheel allowed a rider to get some speed before there were gears. It was easier to care for than a horse, and travelers weren’t limited by train routes, schedules or ticket costs.

The bicycle became part of a grassroots recreation movement, with people using their newfound leisure time after the Civil War to get out of the city and into the country.

Tricycles were manufactured in the 1880s too, though not as a child’s plaything. Women rode tricycles (which came in different sizes to fit legs of various lengths), but men cornered the market on two wheels.

Men formed clubs for touring, complete with uniforms and bugles. These were masculine activities that did not welcome women, whether because their clothing at the time wouldn’t allow them to ride, or attitudes prevented them from being given a chance. 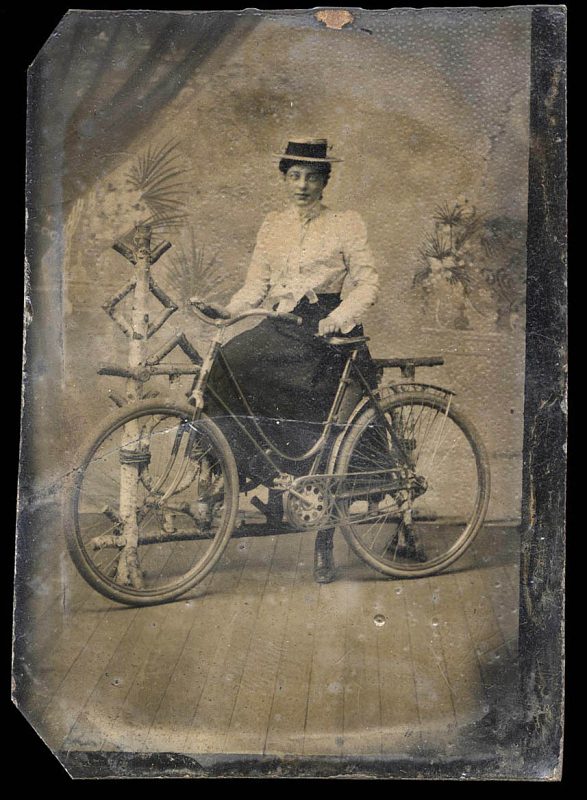 “The high-wheel bicycle became a man’s bicycle because of cultural perceptions,” White says.

Roads weren’t smooth or paved in those days, and men raced and toured on dusty and bumpy terrain. Helmets also weren’t part of the equation. If you were on a high-wheel bicycle and hit a rock, you’d go tumbling over the handlebars and onto your head.

To reduce accidents and injuries, inventors modified the high-wheel bicycle. By the 1890s, the diamond-shaped frame with equal-sized wheels that we recognize today was standard, along with air-filled tube tires and gears. Innovations for the “safety bicycle” allowed riders to gain speed with a lower chance of peril—turning up the volume on the bicycle fad while also changing the game for women. 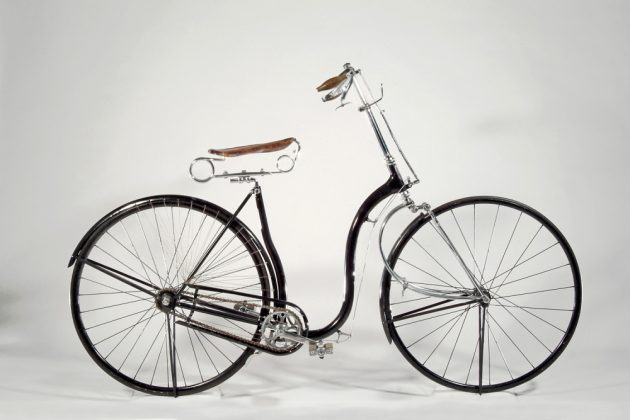 1889 safety bicycle by the Overman Wheel Company of Boston, Massachusetts, which produced this Victoria Model bicycle during the 1890s (National Museum of American History).

Bicycles extended women’s mobility outside the home. A woman didn’t need a horse to come and go as she pleased, whether to work outside the home or participate in social causes. Those who had been confined by Victorian standards for behavior and attire could break conventions and get out of the house.

“Here she was out here riding a bicycle, wearing bloomers, doing things she wanted to do,” White says.

The bicycle craze boosted the “rational clothing” movement, which encouraged women to do away with long, cumbersome skirts and bulky undergarments. Safety bicycle frames accommodated skirts, which got shorter, and the most daring women chose bloomers that resembled men’s pants. A sport corset was designed with elastic for comfort during exercise. 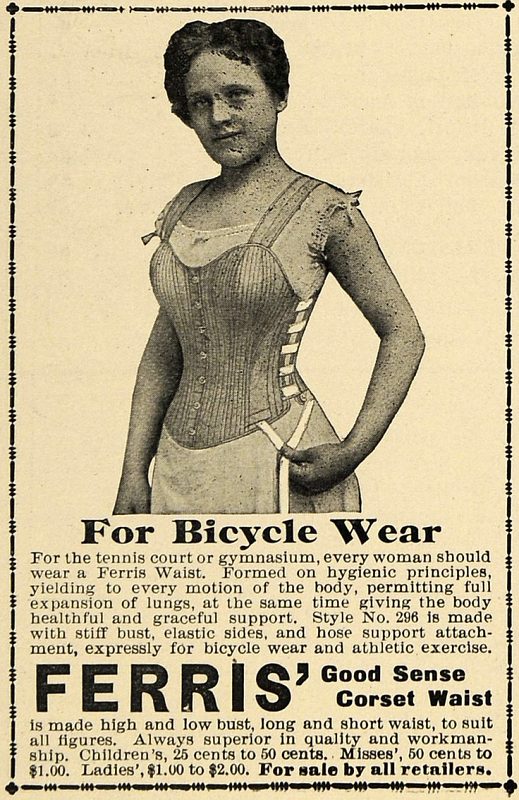 The safety bicycle gave women the personal mobility men enjoyed in the 1880s, offering independence from home or husband. It shaped women’s identity and increased their visibility (literally) in society.

White compares it to women bobbing their hair in the 1920s, or the youth movement of the 1960s. This was a moment when the fabric of American life changed.

There were limits to how the bicycle democratized mobility. Bicycles were expensive, and most Americans who took advantage of the movement were white and affluent. (The Smithsonian’s National Museum of African American History and Culture chronicles a 250-mile bicycle trip that five African American women took in 1928, some of those who claimed the previous century’s transportation phenomenon to gain visibility.) 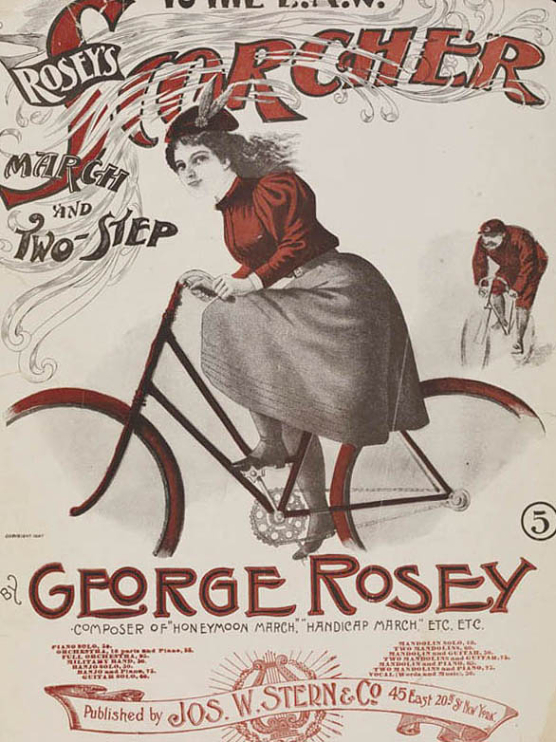 The inventive spirit that drove the bicycle movement led to the electric streetcar, automobiles and motorcycles.

“So suddenly because of invention, there were all these other options,” White says.

The same clientele that adored bicycles pivoted to cars—the new icon of personal mobility. Bicycles were no longer the fastest way to get into the countryside or between towns and cities. Plus, there was the novelty—Americans were enamored with motors and “gaga over gasoline,” according to White.

Some bicycle manufacturers were always in the mix, and bicycles made a comeback in the middle of the 20th century, but nothing compared to the moment from 1892 to 1899.

In February, Dick’s Sporting Goods made the decision to stop selling assault-style rifles amid the fight toward tougher gun laws after the Parkland shooting that left 17 dead. The company is now considering removing hunting...
Fortune
12.01.18

Fifty years ago today, just after midnight, at 1:30 in the morning on June 28, 1969, New York City police officers raided a gay- and trans-friendly bar called the Stonewall Inn on Christopher Street in...
Democracy Now!
06.28.19

Robert Shiller's cyclically-adjusted price-to-earnings (CAPE) ratio has only breached 30 three times in history. The first time was in 1929, just a few short months before the stock market was trounced in one of the...
Fortune
07.31.19

President Donald Trump signed an executive order this afternoon in Florida, pushing for further privatization of Medicare. The ‘Executive Order on Protecting and Improving Medicare for Our Nation’s Seniors’ focuses on expanding Medicare Advantage. It...
Fortune
10.03.19

This is a rush transcript. Copy may not be in its final form. AMY GOODMAN: Today, we’re broadcasting from Tucson, Arizona. Just under three months ago, an unprecedented trial took place here. Amidst a catastrophic...
Democracy Now!
08.19.19

What do Blake Griffin, Justin Bieber, and DeAndre Jordan have in common? Besides being A-list celebrities and star NBA players, they all live in homes developed and built by Huntington Estate Properties, one of Los Angeles’...
High Times
10.31.18

How many people are using cocaine, heroin, methamphetamine, and marijuana in the United States? How much are they using? And how much are they spending? These are a few of the research questions addressed by...
High Times
08.20.19