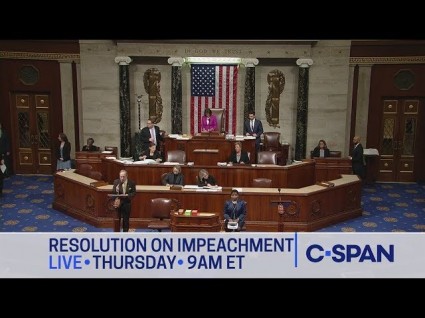 The Democratic-controlled U.S. House of Representatives on Thursday voted to approve on a resolution put forth by Democrats that will dictate the rules and processes of the official impeachment inquiry aimed at President Donald Trump.

The final vote of 232 to 196 was along strict party lines, with just two Democrats voting against the resolution, no Republicans voting in favor, and the chamber's lone Independent, Rep. Justin Amash of Michigan, voting 'aye.'

"This resolution ensures transparency, advancing public disclosure of deposition transcripts, and outlying the procedures for the transfer of evidence to the judiciary committee to use in its proceedings," said Speaker of the House Nancy Pelosi, who presided over the final vote, during her remarks during the floor debate ahead of the tally.

"It enables effective public hearings setting out procedures for the questioning of witnesses and continuing the precedent of giving the minority the same rights in questioning witnesses as the majority," she continued. "Which has been true at every step of this inquiry despite what you might hear."

"Today's vote is a defining moment for every member of the U.S. House of Representatives," said Karen Hobert Flynn, president of Common Cause, in a statement released just ahead of the vote.

"History is watching as Republican Members will weigh the choice of casting a vote for their country or for their party," Hobert Flynn added. "Amidst a growing list of witnesses testifying about shocking abuses of power by the Trump administration and the president’s inner circle and seismic shifts in public disapproval of the president’s conduct, this is the first time many Members will be asked to cast a formal vote that will put them on the right—or wrong—side of history."

Republished under a Creative Commons license from Common Dreams

Foxconn Technology Group executives met Wednesday with Wisconsin's governor, legislative leaders and others but no one is saying much about what they discussed. Foxconn, the world's leading electronics manufacturer, has been under the spotlight in...
Fortune
08.15.19

At noon on Thursday, Bitcoin was worth more than $8,000. At roughly the same time Friday, it was down to $6,900. The volatility that has scared off so many cybercurrency investors over the past few...
Fortune
05.17.19

In New York City, dozens of immigrants with Deferred Action for Childhood Arrivals and allies held a rally in lower Manhattan Saturday to kick off a 16-day march from New York City to Washington D.C.,...
Democracy Now!
10.28.19

Benetton has long made waves off the runway with its provocative advertising campaigns. But the storied family-owned knitwear brand is seeking to make waves inside the world of Italian fashion under the artistic guidance of...
Fortune
09.18.19

Amid a contentious Florida recount, Donald Trump Jr. tweeted a six-year-old, and outdated, story to suggest hundreds of thousands of noncitizens could have voted in the state. The story includes an update saying just 85 noncitizens...
FactCheck.org
11.14.18

This is a rush transcript. Copy may not be in its final form. AMY GOODMAN: This is Democracy Now! I’m Amy Goodman, with Nermeen Shaikh. NERMEEN SHAIKH: We end today’s show with the ongoing siege...
Democracy Now!
10.22.18

Individuals who have breast implants are at risk for developing anaplastic large cell lymphoma (ALCL), a rare cancer that can spread throughout the body, according to the FDA, the United States Food and Drug Administration....
Fortune
11.27.18