Hey, Anderson Cooper! If You're Going To Have Lying Steve Bannon On, Do A Better Job 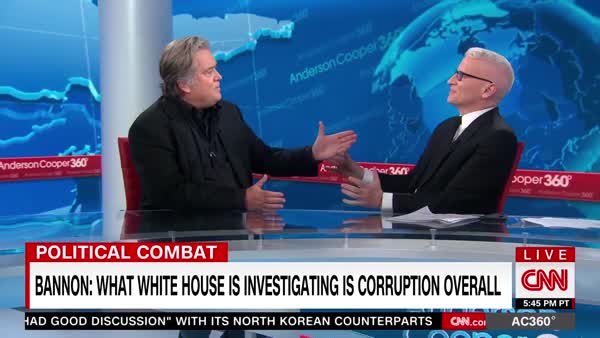 Dear Anderson: You shouldn't have Steve Bannon on your show. But if you're going to have him on, do better. Simply tangling with Steve Bannon and saying, 'Ah, come on, you don't believe that' isn't doing your job. You're just winging it, and that allows an opening for Bannon and his insidious propaganda.

First of all, don't invite this disturbingly effective chaos agent on your show without doing deep preparation. Don't talk to him as if he's ever a good-faith participant when he's not. Not only is it useless to tell him he's lying, it plays into his strategy. It's just "a policy difference." Exhibit 1:

"In general, is it okay for a president, any president to ask a foreign leader of a country fighting a war against our adversaries in need of aid to do a political favor and investigate his political opponent and hold aid over it.?"

"This is where your premise is wrong. Number one, one of the things that started this was "Secret Empires," the book that Peter Schweizer did."

This would have been a good time to derail Bannon's talking points and tell the viewers a few pertinent things about Peter Schweizer.

Schweizer is the president of the Government Accountability Institute, Breitbart's non-profit arm -- which he started with .... Steve Bannon. GAI is funded by the Mercers and the Kochs. GAI's main purpose? To generate "scandals" on demand to attack Democratic candidates. Steve Bannon's institute pays Schweizer to write his books! Remember Clinton Cash, the lying, error-ridden hack job on Hillary Clinton that the New York Times so obligingly mainstreamed for Trump adviser Bannon? Also written by Schweizer, and funded by the GAI.

Yet we want to listen to Bannon and Steve Schweizer about corruption? From the Nonprofit Quarterly:

Steve Bannon, the executive chairman at conservative news site Breitbart News Network (before going on leave in August) and newly appointed senior adviser (some say co-chief of staff) to President-elect Trump, has been receiving compensation from the Government Accountability Institute (GAI), a small Florida-based foundation established by Bannon in 2012. Two other GAI employees are also identified as receiving compensation from the foundation while simultaneously employed elsewhere.

The six-figure compensation reported on GAI’s 2012-2014 Form 990 returns raises serious questions of private inurement and excessive compensation. GAI appears to be paying full-time or near full-time compensation to three people with other apparent full-time employment. In addition, GAI receives much of its funding from a single private foundation whose sole officer is also a GAI board member.

[...] It appears that the Government Accountability Institute, using money from major donors like the Mercer Family Foundation’s Robert Mercer and his administrator/daughter Rebekah Mercer, provided significant income—using charitable gifts—to Bannon while he was employed full-time at Breitbart, to Schweizer while employed at Oval Office Writers, and Hall while employed at both Breitbart and Oval Office Writers. Did GAI receive fair value for compensation paid, or was the compensation excessive and place the individuals in a private inurement situation in regard to their respective relationships to GAI? With Bannon about to become a senior White House aide, perhaps the Government Accountability Institute should investigate itself.

There are so many inherent conflicts in using Steve Bannon as an authoritative source, there is simply no good reason to have him on your show unless you're going to destroy his lies. Period.

So now we know that Steve Bannon, who works around the world to destabilize Western democracies, who plans to use our data to establish his own intelligence network, plans to defend Trump's Ukraine quid pro quo as a "policy difference."

Was that entirely predictable information worth validating Bannon's lies once again?

This isn't that hard, and you're not that stupid, Anderson. I have to assume you and your staff are merely lazy. And in this volatile, delicate time for American democracy, you aren't doing your job.

In a televised town hall, newly announced presidential candidate Sen. Bernie Sanders repeated several misleading claims that we have written about in the past. Sanders said Trump sought to “throw 32 million people off of...
FactCheck.org
02.27.19

For years, sitting U.S. Presidents have shared the tradition of visiting military members around the holidays in order to boost morale. Former President Barack Obama visited the Marine Corps Base in Hawaii throughout his two...
TIME
12.27.18

“Italians,” the great 20th-century Italian writer Ennio Flaiano once remarked, “always rush to the aid of the victor.” But what happens when there’s no clear victor? Or no coherent ideological line between government and opposition?...
The Atlantic
09.13.19

When it comes to helping cigarette smokers quit, it turns out e-cigarette executives were right: e-cigs beat both patches and gum when it comes to smoking cessation tools. The results of a yearlong study published...
Fortune
01.30.19

While it's hard to contemplate right now, the holiday season is right around the corner. And people flying home for Thanksgiving or Christmas might want to think about booking their tickets in the near future...
Fortune
09.19.19

Having written for Ellen DeGeneres, the Oscars telecast and numerous sitcoms including Two Broke Girls, writer-producer Liz Feldman has one of Hollywood’s most enviable comedy careers. So what does it say about the genre that...
Fortune
06.16.19

The U.S. and China are on the cusp of an “historic” agreement that would commit Beijing to cut subsidies for state-owned companies and disclose when its central bank intervenes in currency markets, a top White...
Fortune
02.28.19

Elle King, the Grammy-nominated singer of hit song “Ex’s and Oh’s,” finds that a particular contingent of people consistently doubt her talent: men. “For a long time I didn’t understand that guys…weren’t really my friend,...
Fortune
12.13.18