The Atlantic
Democrats’ Rules Approved for Impeachment Inquiry: Live Updates After Getting Whaled on by Environmentalists, the Trump Administration Is Helping a Vulnerable Sea Mammal 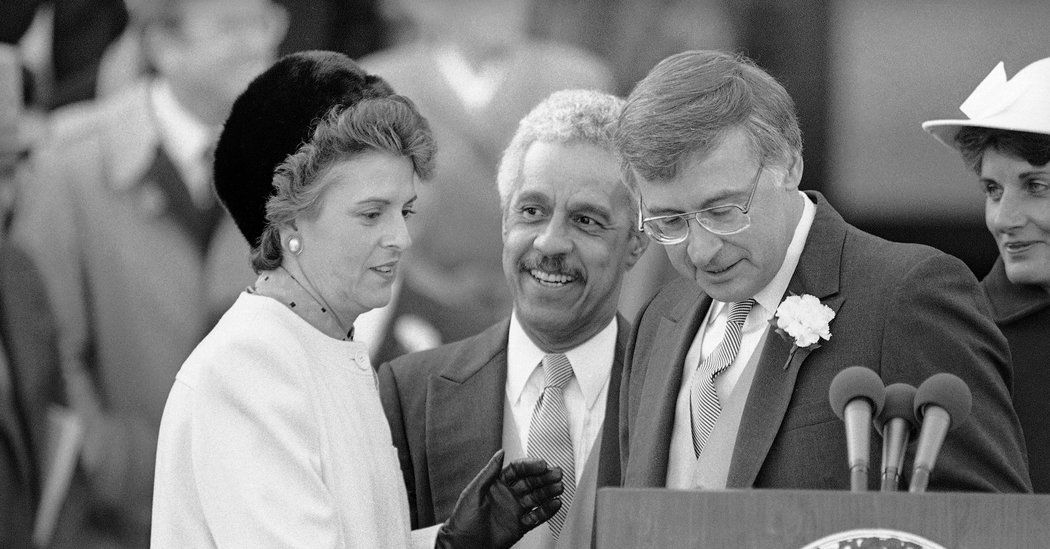 Gerald L. Baliles, a former Democratic governor of Virginia who pushed through a $10 billion transportation initiative as well as measures to clean up Chesapeake Bay, died on Tuesday at his home in Charlottesville, Va. He was 79.

Gov. Ralph Northam confirmed the death, from cancer, in a statement. Mr. Northam said state flags would fly at half-staff for 30 days.

Serving from 1986 to 1990, Mr. Baliles (his slogan was “Baliles. The name rhymes with smiles”) was seen as one in a tide of ambitious, moderate governors who rose to prominence in the 1980s, among them Bill Clinton in Arkansas and Thomas H. Kean in New Jersey. The New York Times called Mr. Baliles “a tough, intelligent, shrewd politician and manager with an intellectual bent.”

Mr. Baliles pushed through the transportation measure during the first year of his administration; a 10-year plan, it required increases in the gas and sales taxes.

“He had the courage to take the political hit for raising taxes for improvements that future governors would cut the ribbons on,” Vivian E. Watts, a Democratic state delegate from Arlington, said in 2002. She was secretary of public safety and transportation under Governor Baliles.

Mr. Baliles, who had been the state’s attorney general under another centrist, Gov. Charles S. Robb, committed Virginia to an ambitious cleanup of the Chesapeake Bay while in office and later continued his conservation efforts. He wrote the book “Preserving the Chesapeake Bay” (1996) as a call to arms to keep the bay cleanup going.

Under his governorship, teacher salaries increased to within $400 of the national average. He introduced the first statewide standardized testing in the public schools. To emphasize the importance of thinking globally, he had oversize maps of the world installed in every seventh-grade classroom in Virginia. He also fought to expand the state prison system and appointed the first woman to the Virginia Supreme Court, Elizabeth B. Lacy.

In 1989, a violent coal strike in southwest Virginia had tensions so high that he was advised to stay out of the area. The economy then collapsed in his last year in office, and when he left the Executive Mansion in Richmond — prohibited under state law from seeking a second consecutive term — the state was saddled with a $2 billion budget deficit. He was succeeded by his lieutenant governor, L. Douglas Wilder, who became the first African-American to be elected governor of any state.

After leaving office, Mr. Baliles served as chairman of a national commission appointed by President Bill Clinton in 1993 to find ways to keep airlines profitable. While in office, he was successful in helping to wrest Virginia’s two largest airports, Washington National and Washington Dulles International, away from federal control and into the hands of the Metropolitan Washington Airports Authority.

After retiring as a partner at the Richmond law firm of Hunton & Williams, he returned to his law school alma mater, the University of Virginia, in 2006 to direct the Miller Center of Public Affairs.

Gerald Lee Baliles was born on July 8, 1940, in rural Patrick County, in western Virginia. He spent his early years in Washington, where his father worked during World War II, but returned to Virginia with his father after his parents broke up. He and his brother Larry lived with their grandparents as “farm boys,” he said, while his younger brother, Stuart, stayed nearby with an aunt and uncle.

Mr. Baliles graduated second in his class from Fishburne Military School in Waynesboro, Va. He received a bachelor’s degree in government in 1963 from Wesleyan University in Connecticut before earning his law degree from the University of Virginia School of Law.

He met his future first wife, Jeannie McPherson, while at Wesleyan, where she was a graduate student in history. They divorced in 1996, and he married Robin Deal in 2003. She survives him, as do two children from his first marriage, Jonathan Baliles and Laura Baliles Osberger; two stepdaughters, Katherine Stone Walsh and Danielle Deal Hudak; and four granddaughters.

Mr. Baliles’s cautious, deliberate style and moderate politics were credited with fueling his climb from state legislator to attorney general to governor without ever losing an election.

“I’m not flamboyant,” he said after winning the governor’s seat. “But I don’t know many people who have been brash who have gotten far in politics.”

Many have believed Mattis has protected the country from the worst of the president's impulses. President Donald Trump stunned observers Thursday evening when, in the midst of a tense government shutdown fight and the day...
Alternet
12.20.18

SAN DIEGO, Calif.—Congressman Duncan Hunter had a problem. The California Republican was supposed to coast to reelection this year. A square-jawed ex-Marine who inherited his father’s House seat in 2008, Hunter had won each of...
The Atlantic
11.05.18

The new rules for the Democratic presidential primary debates have gone public. And for those concerned that the vast size of the candidate field means the Democratic contest will look like the Republicans’ melee in...
FiveThirtyEight
02.20.19

Hundreds of international progressive leaders gathered in Burlington, Vermont, last weekend for an event hosted by The Sanders Institute. While there, Amy Goodman sat down with independent Vermont Senator Bernie Sanders to discuss his efforts...
Democracy Now!
12.03.18

In response to a sweeping document request from a congressional committee looking into potential criminal activity, President Donald Trump wrongly claimed that in the face of similar congressional inquiries, his predecessor, President Obama, “didn’t give...
FactCheck.org
03.07.19

One big question, now that special counsel Robert Mueller has filed his report, is what the process of revealing Mueller’s findings will mean politically, which is a separate question from what additional legal issues might...
FiveThirtyEight
03.22.19

The FBI has classified the far-right group Proud Boys as an “extremist group with ties to white nationalism.” A report by Washington State law enforcement from August revealed the FBI classification and stated that the...
Democracy Now!
11.20.18