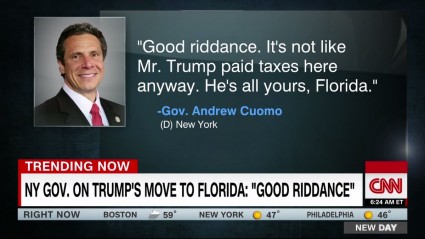 I, for one, am so looking forward to referring to the Florida Orange Man as Trump announces his change of legal residence -- most likely to prevent seizure of Mar-A-Lago in various legal actions. As you can imagine, there was much snark on Twitter:

Trump is about to get ripped apart by NY Courts & there isn't a single presidential power that can stop it.

He's moving to FL because of a unique unlimited Homestead provision in our Constitution letting him keep a home of any value.

Damn straight we will get him. And btw we’ve also pierced the homesteader provisions down there a few times on insurance fraud...always follow the money.

As if the Florida man stories weren’t disturbing enough

Without knowing a single reason for this move by trump, I can guarantee that it’s a grifting move based on greed and someone else left holding the bag. He’s never once in his life been an honest, decent law abiding person. This is just more of his corrupt character.

Mr. Trump will find that there is alot more competition for money laundromats in Florida

It's because his 40 yr tax free contract is up in a few months that Ed Kotch reluctantly signed. Trump probably had dirt on him.

And in other news:

Let’s be clear: @ewarren decided to tax the rich and biggest companies instead of most businesses and workers.

There is enough money in that model to pay for Medicare for All. The most respected economists say so.

This @AdyBarkan piece praising Warren's plan could help shore up her left flank on this issue after lefties have been skeptical of her on M4A. "Warren did what she does best: her fucking homework." https://t.co/nr3VTU1ml8

Ppl are acting like this is a realistic approach to anything. pic.twitter.com/gWIX5shPn5

?The #US is withholding $105 million in security aid for #Lebanon, two US officials said

Inmate firefighters are among the heroes battling the #gettyfire. Qualified inmates have fought California’s fires since World War II. They volunteer for training, earn $2 a day, an extra $1 per hour when fighting fires, and receive sentence reductions. https://t.co/yQI3JSmAvp

An update on Nestlé's bottled water pipeline, which is still siphoning spring water out of a California national forest: Conservationists say some creek beds in the area are now bone dry and once-gushing springs have been reduced to mere trickles. https://t.co/UROC69Npvb

Dahlia Lithwick’s piece on why she hasn’t been back to the Supreme Court post-Kavanaugh is a painful, must-read. I stand with her refusal to “normalize that which is simply wrong.”https://t.co/dWKZAUDD1n

The Washington Nationals have accepted an invitation to visit President Trump at the White House on Monday.

According to contracts @axios obtained, Steve Bannon signed a deal for $1 mil to consult for Guo Media — a company linked to the controversial Chinese billionaire Guo Wengui https://t.co/LGPQLRAame

Americans love the postal service. From banking to combating climate change, the public agency could be used to provide so much more. https://t.co/Pnio03KseK

This is Bobe, orphaned in the firefight that took down ISIS leader Abu Bakr al-Baghdadi last weekend.

But thanks to a Syrian photojournalist and a sympathetic veterinarian clinic, this pup has a new lease on life: https://t.co/iZo0Oub0OJ

This is a call for help.

Advertising for ACA Open Enrollment has been cut drastically.

Less enrollment means more ammunition for people who want to eliminate the ACA.

WE CAN PREVENT THAT.

I've had enough. I need something that makes me smile, and I bet you do, too:

After a brief run-in with the foul pole last night, this baseball is on its way to Cooperstown! Thank you to Howie Kendrick for generously donating his Game 7 home run ball to the HOF. That homer gave the @nationals the lead in the 7th inning, and the rest is baseball history. pic.twitter.com/wGGtJiUvfh

In honor of today being the day that was supposed to be Brexit Day, here's a mashup of Boris Johnson with a wonderful sketch by Monty Python (made by Carlos Manwelly) pic.twitter.com/q6QwQA9tfD

And finally, you know what else we need?

Have a wonderful weekend!

Fights have broken out in Starbucks stores in China, all over a new limited-edition “Cat Paw Cup” that went on sale this week. The cup is a double-walled tumbler that has an interior shaped like...
Fortune
03.01.19

The explosion in corporate profits that lifted share prices to what are still near-record levels is ending. That's the evidence from a recent report issued by FactSet, the research firm that compiles Wall Street analysts'...
Fortune
08.31.19

Health officials have informed travelers who were at the Newark Liberty International Airport on Christmas Eve that they might have been exposed to measles. According to the New Jersey Department of Health, an international traveler—who...
Fortune
12.29.18

This is a rush transcript. Copy may not be in its final form. AMY GOODMAN: This is Democracy Now! I’m Amy Goodman, with Juan González. JUAN GONZÁLEZ: California senator and presidential candidate Kamala Harris is...
Democracy Now!
07.02.19

Pinterest filed documents to go public with the Securities and Exchange Commission late Friday, joining other tech-unicorn peers such as Uber and Lyft in what is becoming a crowded IPO pipeline. The social-media company, last...
Fortune
03.22.19

President Donald Trump wrongly claims that “58,000 non-citizens voted in Texas, with 95,000 non-citizens registered to vote.” This latest voter fraud misinformation from the president is based on the state’s efforts to match driver’s license...
FactCheck.org
01.30.19

Banished from my sight. A second major glitch that could have leaked user data has prompted Google to terminate its failed Google+ social network even sooner than expected. The network’s consumer offering will close in...
Fortune
12.11.18

Online streaming platforms like Netflix and Amazon just made television history, producing the largest share of original scripted shows in 2018, the first time that’s ever happened. Of the 495 scripted original shows released this...
Fortune
12.13.18