New York Times
Obama on Call-Out Culture: ‘That’s Not Activism’ Termites Cannibalize Their Co-Workers for the Good of the Colony 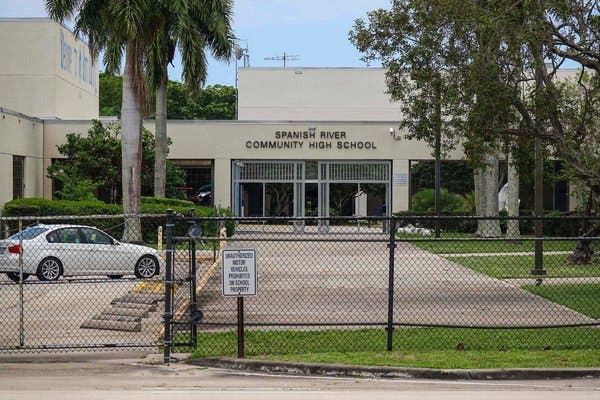 The principal of Spanish River Community High School in Boca Raton, Fla., was removed earlier this year and fired this week by school officials.Credit...Zuma Press/Alamy

A high school principal in Florida who refused to acknowledge the Holocaust as “a factual, historical event” was fired on Wednesday by the Palm Beach County school board.

The board voted 5 to 2 to accept the recommendation of the district superintendent, Donald E. Fennoy II, to fire the principal, William Latson, who worked at Spanish River Community High School in Boca Raton, according to Julie Houston Trieste, a spokeswoman for the school district. Mr. Latson can appeal the decision, which will take effect Nov. 21.

“These are the facts: He is not anti-Semitic; he believes the Holocaust is factual,” Thomas Elfers, Mr. Latson’s lawyer, told board members on Wednesday, according to The South Florida Sun Sentinel. Mr. Elfers did not immediately respond to requests for comment on Thursday.

Mr. Latson had led Spanish River High for 11 years before he was reassigned in July after emails he sent to a student’s parent in April 2018 came to light.

“I can’t say the Holocaust is a factual, historical event because I am not in a position to do so as a school district employee,” Mr. Latson wrote in one of the emails, which were obtained by The Palm Beach Post. He said he had to separate his personal views about the Holocaust from his job as a public school official.

Thousands of people signed on to a Change.org petition calling for Mr. Latson’s termination. School board officials, who said Mr. Latson had become “a major distraction,” removed him from his position and reassigned him to an unspecified job.

After the reassignment this summer, Superintendent Fennoy recommended that the school board not renew his contract, according to a school district spokeswoman.

On Wednesday, in recommending that the principal be terminated, the superintendent said Mr. Latson had “failed to respond to communications from his supervisors and failed to assist the district in addressing the serious disruption” from the email and news coverage.

The Jewish Federation of South Palm Beach County, which represents survivors of the Holocaust as well as relatives of those who were killed, voiced its agreement with Mr. Latson’s termination on Wednesday.

“We are grateful for Superintendent Donald Fennoy’s leadership and commitment to a thorough investigation resulting in this vote by the school board,” Matthew C. Levin, the group’s chief executive, said in a statement. “Latson’s abhorrent denial of the Holocaust is unacceptable, and there is no place in our community, and certainly not in our education system, for such unethical ignorance.”

(VATICAN CITY) — Pope Francis closed out his extraordinary summit on preventing clergy sex abuse by vowing Sunday to confront abusers with “the wrath of God,” end the cover-ups by their superiors and prioritize the...
TIME
02.24.19

(WASHINGTON) — President Donald Trump says “big progress” is being made in talks between the U.S. and China to head off further escalation in a yearlong trade war. Trump says Saturday that he had a...
TIME
12.29.18

In particular, Morrison verified that Trump’s envoy to the European Union, Gordon Sondland, conveyed to a Ukrainian official that the military aid would be released if the country investigated an energy firm linked to the...
Washington Post
10.31.19

(OAKLAND, Calif.) — A U.S. judge in California on Sunday blocked Trump administration rules, which would allow more employers to opt out of providing women with no-cost birth control, from taking effect in 13 states...
TIME
01.13.19

The Democratic Republic of the Congo will soon hold elections that could dictate whether it falls deeper into instability and conflict or begins to lay the groundwork for a more peaceful future. Already, government security...
TIME
12.28.18

(JERUSALEM) — Israeli author Amos Oz, one of the country’s pre-eminent and widely acclaimed writers, died on Friday after a battle with cancer, his family announced. He was 79. His daughter, Fania Oz-Salzberger, announced her...
TIME
12.28.18

The Facebook event may have started in jest, but local officials are bracing for mayhem.
The Atlantic
09.04.19

(LONDON) — Nicolas Roeg, the prominent British film director known for making provocative films and working with rock stars Mick Jagger and David Bowie over a six-decade career, has died. He was 90. The director...
TIME
11.24.18