E.P.A. to Roll Back Rules to Control Toxic Ash from Coal Plants

The Atlantic
Parents Are Getting Their Annual Warning To Watch For Weed In Halloween Candy Paula White, Trump’s Personal Pastor, Joins the White House 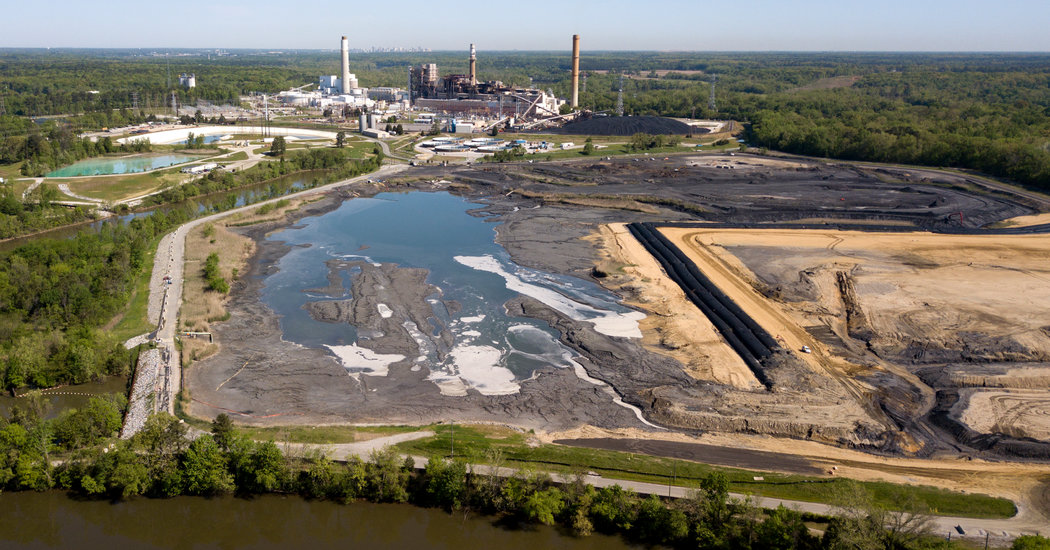 Want climate news in your inbox? Sign up here for Climate Fwd:, our email newsletter.

WASHINGTON — The Trump administration is expected to roll back an Obama-era regulation meant to limit the leaching of heavy metals like arsenic, lead and mercury into water supplies from the ash of coal-fired power plants, according to two people familiar with the plans.

With a series of new rules expected in the coming days, the Environmental Protection Agency will move to weaken the 2015 regulation that would have strengthened inspection and monitoring at coal plants, lowered acceptable levels of toxic effluent and required plants to install new technology to protect water supplies from contaminated coal ash.

The E.P.A. will relax some of those requirements and exempt a significant number of power plants from any of the requirements, according to the two people familiar with the Trump administration plan, who requested anonymity because they were not authorized to speak about the new rules.

The move is part of a series of deregulatory efforts by the Trump administration aimed at extending the lives of old, coal-fired power plants that have been shutting down in the face of competition from cheaper natural gas and renewable energy generators. Coal ash, the residue produced from burning coal, was dumped for years in holding areas near power plants, largely without regulation, but it came to the public’s attention after spills in North Carolina and Tennessee sent mercury, cadmium, arsenic and other heavy metals from the ash into water supplies.

“We support reasonable regulations for coal ash and non-coal-ash byproducts that protect health and the environment,” said Michelle Bloodworth, president and chief executive of the American Coalition for Clean Coal Electricity, an industry group. “At the same time, it is important that regulations not cause unnecessary retirements or idling of coal-fired power plants because they are necessary to ensure that consumers have a reliable, resilient, and affordable electricity supply.”

Environmental groups warned that the regulatory rollback could lead to contaminated drinking water and birth defects, cancer and stunted brain development in young children. Energy analysts said the administration’s latest gambit to bolster the industry would not save the industry from its long decline.

“While it might keep some existing coal plants running a little bit longer, it’s at best a Band-Aid on a bullet wound that the market has sent the coal industry,” said Joshua Rhodes, a senior energy analyst with Vibrant Clean Energy, a clean technology consultancy based in Colorado.

A spokesman for the E.P.A. did not respond to a request for comment.

The Obama-era rule came partially in response to a 2008 disaster in Tennessee when a containment pond ruptured at the Kingston Fossil Plant. More than 1.1 billion gallons of coal-ash slurry spilled into nearby rivers and destroyed homes.

In 2014, a broken pipe spilled millions of gallons of liquefied coal ash from a retired power plant into the Dan River in North Carolina. It turned the water into dark sludge and threatened drinking water supplies. The electric utility Duke Energy later agreed to pay a $6 million fine for violating water protection laws. The spill also prompted the passage of a new state law in North Carolina that requires all coal ash storage ponds be closed by 2029.

Utility companies and coal industry supporters say the Obama administration overreacted to those events, in large part because the administration wanted to force the closure of coal-fired power plants by eliminating ways of disposing of coal ash.

Agency officials held a conference call Tuesday with supporters of the Trump administration’s deregulatory efforts to discuss the measure, multiple people on the call confirmed.

According to the E.P.A., about 1.1 million Americans live within three miles of a coal plant that discharges pollutants into a public waterway. The 2015 rule set deadlines for power plants to invest in modern wastewater treatment technology to keep toxic pollution out of local waterways. The regulation also required them to monitor local water quality and make more of the information publicly available. The Obama administration estimated the regulations would stop about 1.4 billion pounds of toxic metals and other pollutants from pouring into rivers and streams.

But the rule would have also raised the cost of operating the plants, further endangering their economic viability.

One person familiar with the E.P.A.’s current plans said the agency intended to say that the new rule would remove more pollutants than the Obama-era regulation. That assertion is based on an analysis that assumes about 30 percent of power plants will voluntarily chose to install more rigorous technology.

The new rule also will confine the areas that utilities must measure for leakage, according to a second person familiar with the plans.

Power plants were originally required to start complying with the requirements by as early as November 2018, but Scott Pruitt, President Trump’s first E.P.A. administrator, postponed compliance until 2020, saying the agency was providing “relief” to utilities as it reviewed the rule.

Environmental groups have challenged that delay and said they would also challenge the rollback.

A recent study by environmental groups found that more than 90 percent of the 265 coal plants required to test their groundwater near coal ash dumps discovered unsafe levels of at least one contaminant. According to environmental groups that track the problem, power plants discharge more than 1 billion pounds of pollutants every year into 4,000 miles of rivers, contaminating the drinking water and fisheries of 2.7 million people.

“That knowledge should lead E.P.A. to move to establish greater protections for our health,” Ms. Evans said. “But E.P.A. is running the other way under the direction of the utilities.”

This year, the E.P.A. proposed a number of separate amendments to the coal-ash regulations, including extending by 18 months the time that industry could use certain sites adjacent to groundwater areas for dumping. Andrew Wheeler, the administrator of the E.P.A. and a former lobbyist for the coal industry, said in a statement at the time that the relaxed rules would save affected utility companies $28 million to $31 million a year in regulatory costs.

“Our actions mark a significant departure from the one-size-fits-all policies of the past and save tens of millions of dollars in regulatory costs, Mr. Wheeler said then in a statement.

Kevin Book, managing director at Clearview Energy Partners, a research firm, said the E.P.A.’s actions could help a few companies increase the supply of coal-fired electricity but would not help the broader coal industry, which has seen demand for its product decline sharply.

“You can’t stimulate demand for something that’s been shut down already,” he said.

Environmental activists said they intended to challenge the rollbacks in court, something they will be able to do when E.P.A. issues a final rule, most likely early next year.

Trump has previously boasted denuclearization is coming "very, very soon." On Wednesday, CNN reported that satellite evidence shows North Korea is upgrading a major missile base — and constructing what appears to be a new...
Alternet
12.05.18

President Donald Trump has repeatedly criticized energy-efficient lightbulbs, saying that the bulbs people are “being forced to use” are more expensive, contain hazardous gases and give off light that’s “not as good” as incandescents. Experts,...
FactCheck.org
09.19.19

White House economic adviser Larry Kudlow claimed without evidence that the United States-Mexico-Canada Agreement would add “180,000 new jobs per year” in the U.S. Kudlow may have been referencing an April analysis done by the...
FactCheck.org
08.21.19

This is a rush transcript. Copy may not be in its final form. AMY GOODMAN: We’re broadcasting from the Sundance Film Festival in Park City, Utah. While Hollywood continues to be a male-dominated industry with...
Democracy Now!
01.29.19

Massachusetts senator Elizabeth Warren officially announced on Saturday (Feb. 9) that she’s running for US president, entering a field that already features four women who are considered major candidates. There’s never been this many women...
Quartz
02.09.19

“Grotesque” is how Sen. Bernie Sanders has described the level of wealth inequality in the U.S., and he’s not the only Democrat running a presidential campaign that relies heavily on this idea. Sen. Elizabeth Warren...
FiveThirtyEight
08.16.19