TIME
How Trump Could Quickly Raise the Stakes in Hong Kong Apple’s iPhone 11 Is Coming. Here’s When It May Be Unveiled

Forty-five-carat diamonds aren’t exactly something you come across every day.

However, now a lucky fan is the proud owner of a ring cut from one diamond—a ring that was also designed by Apple’s departing chief design officer Jony Ive and renowned industrial designer Marc Newsom through their new design studio, LoveForm.

How does one find a 45-carat diamond to cut a ring out of, exactly? You make one.

In order to create the unique ring, Ive and Newsom worked with Diamond Foundry, a producer of man-made diamonds located on the outskirts of San Francisco. Sotheby’s auctioned off the ring earlier this year as a benefit for (RED). It sold for $256,250.

Diamond Foundry was charged with developing the ring, which meant it also had to produce the diamond for it: a single diamond big enough to cut an entire ring, custom fit to the auction winner’s ring finger. It was feat never done before. Also, a complicated one.

“The big challenge is creating that very big piece of rock diamond,” Diamond Foundry cofounder and CTO Jeremy Scholtz tells Fortune inside the company’s “diamond mine,” which looks more like a computer lab than a mine. 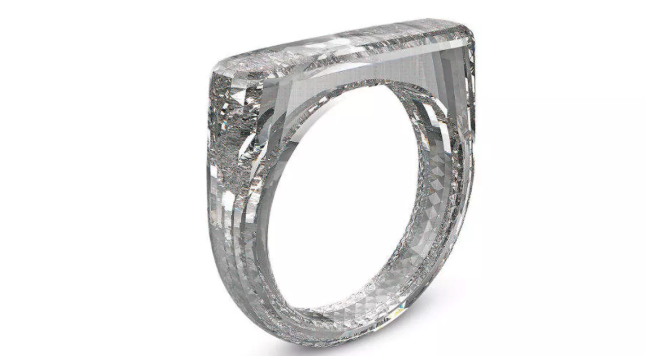 In order to create a diamond, the company first needs a seed, which is essentially just a superthin laser-cut slice of an existing diamond.

“A diamond seed contains what we call the atomic blueprint for a single crystal diamond,” Scholtz says. “Diamonds are 100% carbon atoms; they’re arranged in a very particular crystal orientation. What the seed does for us is it provides the organization of all of those atoms throughout that entire plate of material so that every single atom in that plate is organized in the same way.”

Confused? Scholtz says the process is somewhat like tiling a floor. If four people start at different corners of the room laying tile, their individual sections might look great. But once they reach the center, the four different tilers’ work will most likely be mismatched.

The same works in growing diamonds. That seed works as a blueprint of sorts to ensure all those tiles are put in the right place.

Once a seed is created, the company puts it in a growth reactor, where it’s fed a very pure form of natural gas that contains only carbon atoms. That gas is then energized with an electromagnetic discharge, which causes a very intense electromagnetic effect that splits apart those gas molecules and freezes individual carbon atoms at the surface.

“After about two weeks of time in the reactor, we get a piece of rough diamond,” Scholtz says. 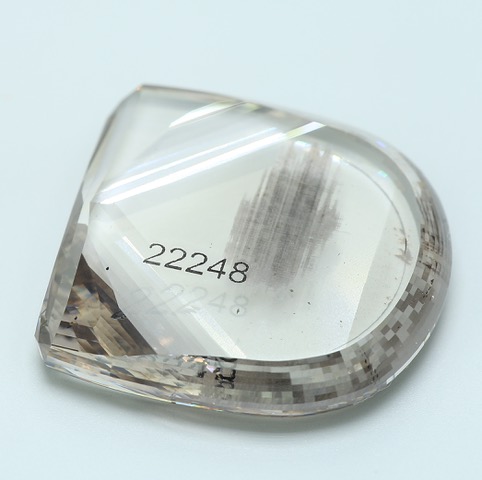 The seed, a superthin laser-cut slice of an existing diamond.
Diamond Foundry

When it came to Ive and Newsom’s ring, the first big obstacle was that there wasn’t a seed large enough to make it happen.

“It was a huge challenge in terms of first producing a seed that was such a large area, but was also still organized with the same level of quality,” Scholtz says. The company then had to make sure that it was growing the diamond uniformly on that large area, and that any imperfections didn’t grow to be so large that they cracked the entire thing apart. There was a whole team of people assigned to just figuring out this portion of the puzzle.

“It’s essentially just a lot of time and effort,” Scholtz says. “The big challenge in this industry, in general, is how to achieve thickness as we grow. There are a lot of companies that have been able to grow smaller stones. But to be able to grow a piece of material as we’re stacking all those many, many layers of atoms on top of each other—it’s very easy to produce faults that will then multiply.”

He says the company went through quite a bit of material before getting to that one final piece, simply because with billions of layers, there is a lot of room for small errors that turn into big ones.

Once they did manage to create that massive piece of diamond, they then had to cut a ring out of it. Whereas most diamond rings are made by attaching a diamond to a piece of metal, this one involved removing small pieces of diamond to create 2,000 to 3,000 facets, some as small as several hundred micrometers. 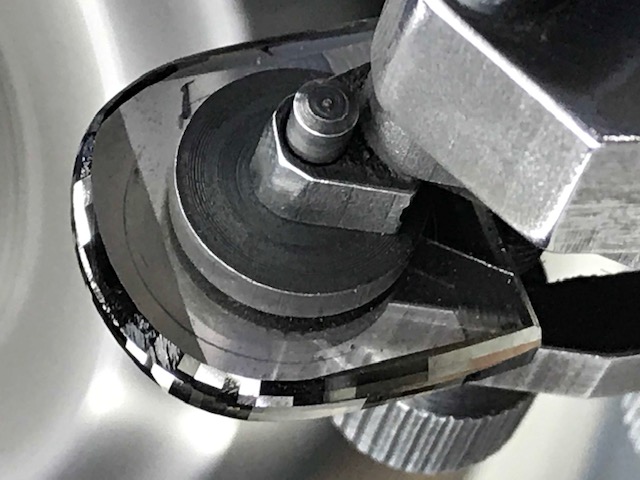 The diamond being cut.
Diamond Foundry

All of the exterior facets are polished manually on a flat polishing wheel. Afterward, the center was cut out and the internal facets created—a feat Scholtz describes as a “nail biter.”

“I'd say there is as much effort put into this one piece of material as there was to put in the first piece of diamond that we ever grew,” Scholtz says. “So getting the kind of the zero-to-one step was the same as getting from this cube to that (RED) ring.”

And it’s likely not the last unique innovation from the company.

“We want to keep pushing the boundary on what you can do with diamonds,” Scholtz says. “The Diamond Foundry name is supposed to mean that we are the foundry for diamonds—whatever diamond you need, we can make it.”

—How this wedding singer earns $1.5 million a year
—Tips and treats for stress-free travel with pets
—You’ll be surprised by Steven Spielberg’s latest project
—This store sells only chess-related products in an effort to win over millennials
—How Etsy crafted an e-commerce comeback
Follow Fortune on Flipboard to stay up-to-date on the latest news and analysis.

Over the past five years or so, Canadian healthcare workers have noticed an increase in so-called “cannabis-induced psychosis” among Canadians. According to data collected by the Canadian Institute for Health Information, 723 people across the...
High Times
01.02.19

SALT LAKE CITY (AP) — Utah legislators approved changes to the state’s medical marijuana law, an issue that has faced fierce criticism from people on both sides of the debate. The Utah Senate and House...
High Times
09.19.19

If you're wondering why a reporter was talked about more than Durant, Irving, or the poor, poor New York Knicks, it's due to Wojnarowski's scoops. Woj broke the news that Kevin Durant would be headed...
Fortune
07.01.19

Gabrielle Jammal wants to change the world, one cup of tea at a time. As a certified tea sommelier—yes, that’s a real job—she runs the afternoon tea program at the Baccarat Hotel in New York...
Fortune
06.08.19

Monty Python star Michael Palin has been knighted—just not for the first time. Palin, who made the UK’s 2019 New Year Honours list announced Friday (Dec. 28), appeared in the 1975 film Monty Python and the Holy...
Quartz
12.28.18

President Donald Trump late Wednesday seemed to conflate the protests in Hong Kong with the U.S.'s trade war with China. "Of course China wants to make a deal. Let them work humanely with Hong Kong...
Fortune
08.15.19

1. U.S. stock index futures edged higher early Friday, putting the Dow Jones Industrial Average and the S&P 500 within striking distance of all-time highs. The Dow was up by 0.2 percent, while the S&P...
The Week
09.13.19