The Atlantic
Trump Tells Louisiana ‘I’ll See You Tonight.’ He’s Going to Mississippi. Donald Trump would like to provide a ‘fireside chat’ for America to showcase his ‘perfect call’ 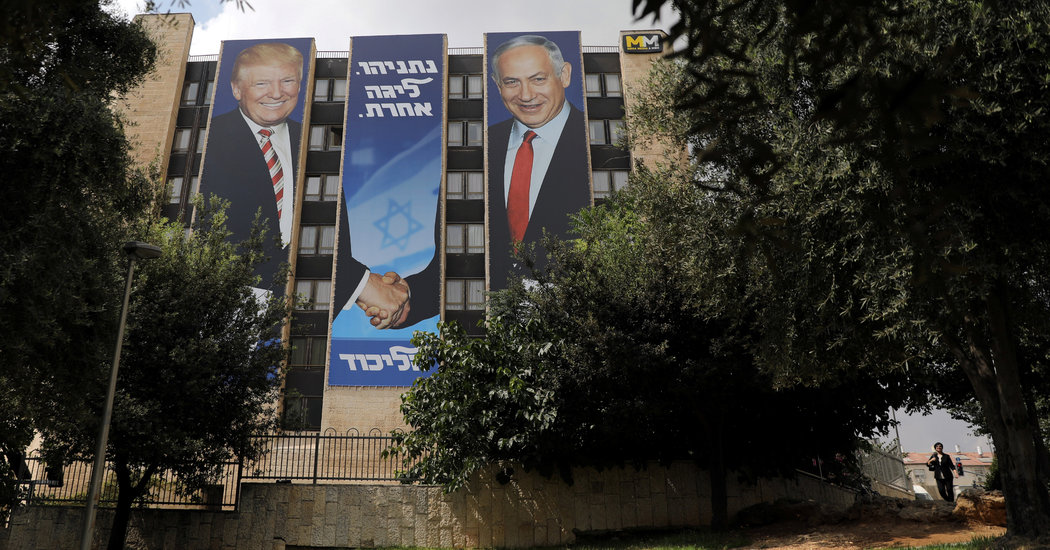 Free tuition to public colleges? Just a few years ago it seemed unthinkable, but now it’s a popular proposal embraced by some leading Democratic presidential candidates.

Medicare for all? Same thing.

But what about foreign policy? Are Democratic voters moving to the left on world affairs, too?

There is at least one area in which the answer seems to be yes: the United States’ once-unquestionable loyalty to Israel.

At a conference this week sponsored by J Street, a group that advocates a progressive foreign policy toward Israel, several Democratic presidential candidates said the United States should consider withholding military aid if Israel continued to annex land in the West Bank.

“It shouldn’t be hard to be against bad policies and to be against anti-Semitism,” Pete Buttigieg, the mayor of South Bend, Ind., said echoing the critical tenor Senators Bernie Sanders and Elizabeth Warren used in their speeches.

Last election cycle, such a stance might have seemed untenable.

But polling data suggest that as Prime Minister Benjamin Netanyahu has drawn an increasingly hard line against Palestinians while cultivating a chummy relationship with President Trump, many Jewish voters and liberal Democrats have started to feel uneasy. “Both Donald Trump and Bibi Netanyahu have approached this issue far differently than any of their predecessors, and Trump has made a real effort to align himself with Netanyahu and with the right in Israel,” Jeremy Ben-Ami, the president of J Street, said in a phone interview. “Over the past eight or nine years, with Bibi in control in Israel and now Trump here, you’ve seen some real shifts in the ways that the partisanship on this issue plays out.”

Among Democrats, sympathy for Israel is weaker than it was before Mr. Netanyahu took office in 2009. When asked in a Gallup poll in February to choose which side of the Israeli-Palestinian conflict they sympathized with more, just 43 percent of Democrats said they were partial to Israel — the lowest number in 14 years. (Thirty percent said they sympathized with the Palestinians.)

Among liberal Democrats, there is now almost an even split between those saying they sympathize with the Israeli side and the Palestinian one, according to Gallup.

And a Pew survey conducted in April found that Jewish Americans were far more likely than Christians to say that Mr. Trump was “favoring the Israelis too much.” Forty-two percent of Jewish respondents to the national poll said so, compared with just 6 percent saying he was too supportive of Palestinians. Only about one in four Christians said Mr. Trump was overly supportive of Israel.

Jewish voters are among the Democratic Party’s most loyal supporters. In the 2018 midterm elections, four out of every five Jewish voters said in exit polls that they had supported a Democratic candidate for Congress.

And while Jewish Americans account for just 2 percent of the overall vote, they represent an outsize share of the Democrats’ donor base. According to an analysis by The Forward, a Jewish publication, roughly 5.5 percent of all donors to Democratic presidential candidates in the first half of this year were Jewish, and they accounted for 7 percent of all funds given. (The Forward used several methods, including a research tool called the Distinctive Jewish Names list, to identify donors who were most likely Jewish in campaign finance reports.)

The Forward found that the Democratic presidential candidate receiving the most donations from Jewish backers this cycle has been Mr. Buttigieg, even as he has issued sharp critiques of Mr. Netanyahu.

“You can be committed to the U.S.-Israel alliance without being supportive of any individual choice by a right-wing government over there,” Mr. Buttigieg said at the J Street conference on Monday.

Mr. Sanders, who would become the country’s first Jewish president if elected, railed against giving “carte blanche to the Israeli government, or for that matter to any government at all.”

“I would say that some of the $3.8 billion should go right now to humanitarian aid in Gaza,” Mr. Sanders added, referring to the annual amount of military aid that the United States currently gives to Israel.

Halie Soifer, the executive director of the Jewish Democratic Council of America, said that as Mr. Trump and Mr. Netanyahu have embraced more hawkish policies, Democratic politicians who are otherwise supportive of Israel have adopted a more critical stance.

“What we’ve seen is a shift to the right, from Trump on down, whereby U.S. foreign policy no longer prioritizes a two-state solution to the Israeli-Palestinian conflict,” she said. “What you’ve heard recently are responses to shifts from the other side of the aisle, and frankly even shifts in terms of Israeli government policy.”

Last spring, J Street commissioned a Democratic firm to poll likely primary voters nationwide about their feelings on Israel. As the firm stated in its report, the poll found that among the Democratic electorate, “the political playbook on Israel has changed.”

Any survey conducted by a partisan group must be taken with a grain of salt, but the study’s findings paint a detailed picture of a Democratic electorate that is generally supportive of Israel but also concerned about the potential for unfair treatment of Palestinians.

The study found that Democratic voters are far more likely to say the United States should be an impartial broker in peace negotiations, instead of taking Israel’s side. It showed little Democratic support for sending military and financial aid to Israel if it continued to annex land, or for recognizing Jerusalem as the Israeli capital, as Mr. Trump did in 2017, dealing a blow to the Palestinian nationalist cause.

Mr. Ben-Ami attributed much of the shifting sentiment among Democrats to Mr. Trump and Mr. Netanyahu.

Those leaders, he said, are “the two people who have had the most significant impact on changing this whole equation.”

In a flurry of tweets, President Donald Trump stretched the facts when he alleged that special counsel Robert Mueller and his staff have “many” conflicts of interests: Trump falsely claimed that “the woman in charge...
FactCheck.org
12.07.18

Subscribe to Radio Atlantic: Apple Podcasts | Spotify | Stitcher | Google Play The midterms were over a week ago, but a number of races have yet to be called. In Florida, the senate and...
The Atlantic
11.16.18

In recent months, President Trump’s approval and disapproval ratings have been unimpressive, stubbornly stuck around 42 percent and 53 percent, respectively, according to FiveThirtyEight’s presidential approval tracker. That could be a bad sign for his...
FiveThirtyEight
05.16.19

Prosecutors are getting frustrated with the lack of information they’re getting from former Trump campaign chairman Paul Manafort since he agreed to cooperate as part of a plea deal in October, ABC News reported Friday....
Talking Points Memo
11.09.18

Under the proposal, thousands of unused visas would go to Irish nationals. After spending much of the past two years enabling President Donald Trump's hard-line immigration policy and blocking the House from voting on bipartisan...
Alternet
12.16.18

There will now be at least nine participants in November’s Democratic debate! On Thursday, Sen. Amy Klobuchar earned 3 percent support in a new Quinnipiac University national poll. It was the final piece of the...
FiveThirtyEight
10.24.19

He didn't realize he's playing a losing game. President Donald Trump is not used to presiding over a divided government, and it's clear he's not going to like it. His performance in the government funding...
Alternet
12.21.18

Journalism is an ephemeral, churning thing. Tabloid journalism even more so. But libraries are good about counteracting that. In the marble halls of the New York Public Library, a short walk south from Trump Tower,...
FiveThirtyEight
02.28.19