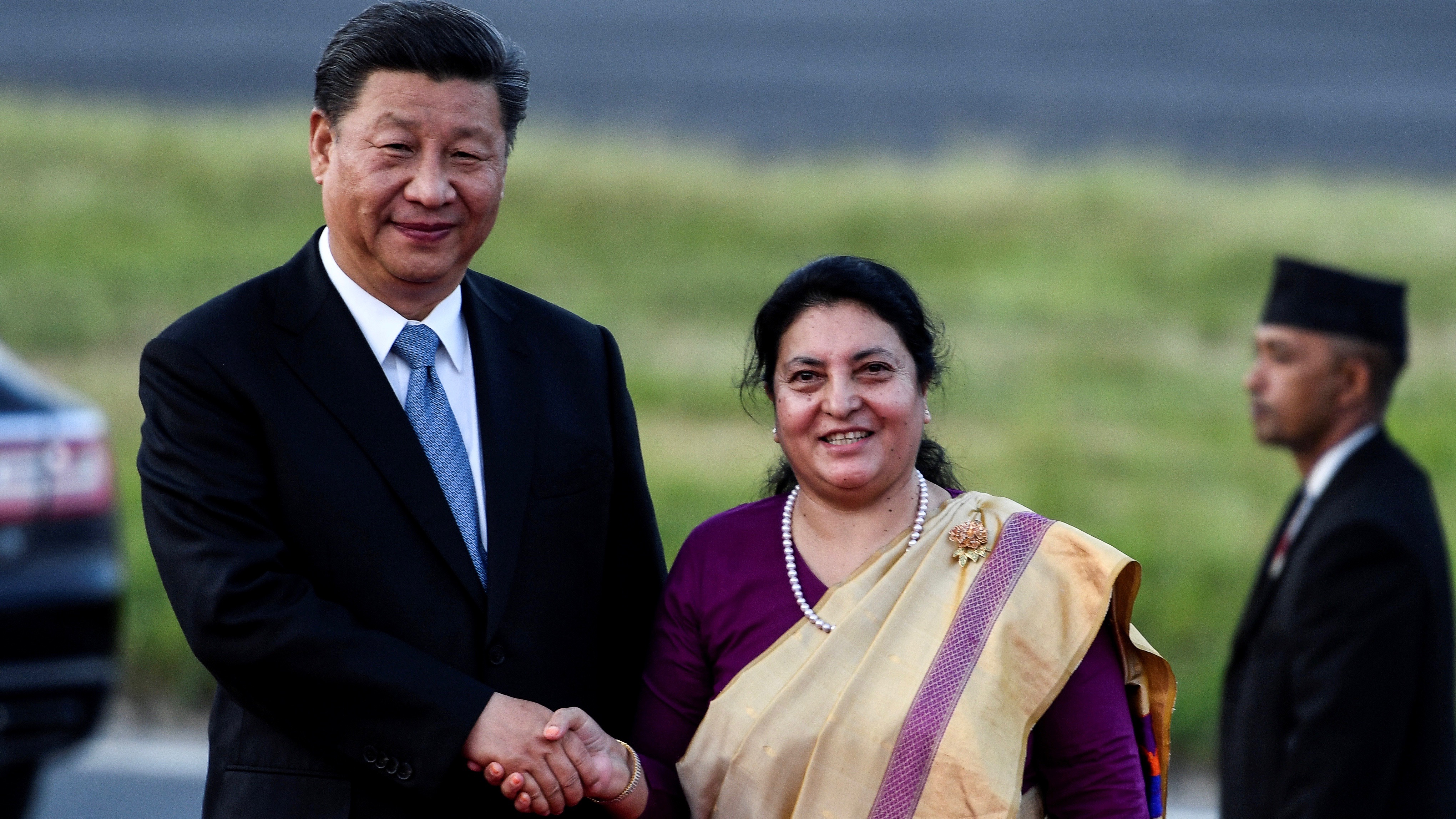 Nepal has been preparing for the first visit of a Chinese head of state since 1996 with, among things like fixing potholes and planting flowers, lessons in the thinking of Xi Jinping supplied by the Chinese Communist Party. Today, Xi arrived, promising business opportunities.

But anyone who has studied China’s president in action knows there’s a political cost to doing business with his nation.

From China’s perspective, landlocked Nepal is strategically located in South Asia. The democratic nation’s placement along India’s northern border and beside Tibet makes it a good political get for Xi, who has been pressuring Nepalese officials to sign an extradition treaty allowing China to extradite migrants from Tibet who often pass through Nepal to India. Inking that deal is reportedly high on Xi’s agenda.

It’s not yet clear that he’ll get what he wants, however.

Xi was met at the Kathmandu airport today by Nepalese president Bidya Devi Bhandari and will meet with various leaders throughout his 20-hour visit. According to the Kathmandu Post, the Chinese president is expected to sign about 12 deals with Nepalese officials on everything from energy-sector investment to the Kerung-Kathmandu railway to the creation of a center for Ayurvedic study and a university focused on science and technology. However, officials have been “tight-lipped” about some of the agreements, including, it seems, the extradition treaty, which was not one of the deals the local paper described as finalized.

Some in Nepal aren’t totally sold on embracing China, Xi, or his thought. “The Chinese are offering huge economic incentives during this visit, but they are injecting their own interests, too,” said Mrigendra Bahadur Karki, head of the Centre for Nepal and Asian Studies at Tribhuvan University in Kathmandu, to the New York Times. “Xi is coming to Nepal to take it under China’s grip.”

Xi’s Nepalese visit comes on the heels of an informal meeting with Indian prime minister Narendra Modi. Both India and China have sought to assert their influence in Nepal while they have traditionally been at odds with each other. But today Modi and Xi spoke of a new era of friendship between the world’s two most populous nations.

If the Chinese president has his way, by the weekend’s end he’ll be announcing a special relationship with the much smaller and less powerful country, one that leaves Tibetans fleeing Chinese oppression via Nepal with less hope of escape.

President Trump drew attention on Tuesday to one of the deepest questions about American life: who gets to be a citizen. The president told “Axios on HBO” that he intends to end birthright citizenship by...
TIME
10.30.18

In this day and age, you don't need a place in a TV-debate to get your point across. As long as you make sure you're in shot when a famous politician is making a statement,...
Mashable
11.06.18

Google’s parent company, Alphabet, says its cloud services business is gaining traction. The company said on Thursday as part of its second quarter earnings report that its cloud unit, which includes its data center business...
Fortune
07.25.19

This is a rush transcript. Copy may not be in its final form. AMY GOODMAN: This is Democracy Now! I’m Amy Goodman, with Juan González. JUAN GONZÁLEZ: We turn now to Georgia, where a 44-year-old...
Democracy Now!
07.30.19

Summary President Donald Trump made several claims in his Feb. 11 political rally in El Paso that distorted the facts, including: He said “the trade deficit really went down very big this last month,” leaving...
FactCheck.org
02.14.19

After Democrats gained control of the House in the midterm elections, President Donald Trump repeated his long-running statement that he wouldn't release his tax returns because they were under audit, making false claims in the...
FactCheck.org
11.09.18

Welcome to Pollapalooza, our weekly polling roundup. Poll of the week Fifty people have been indicted in the largest college admissions scam the Department of Justice has ever prosecuted, in which wealthy parents are accused...
FiveThirtyEight
03.15.19

Lots of Job Hunting, but No Job, Despite Low Unemployment