New York Times
The Secrecy Of The Impeachment Hearing Has Republicans All Riled Up Daily Cartoon: Thursday, October 24th 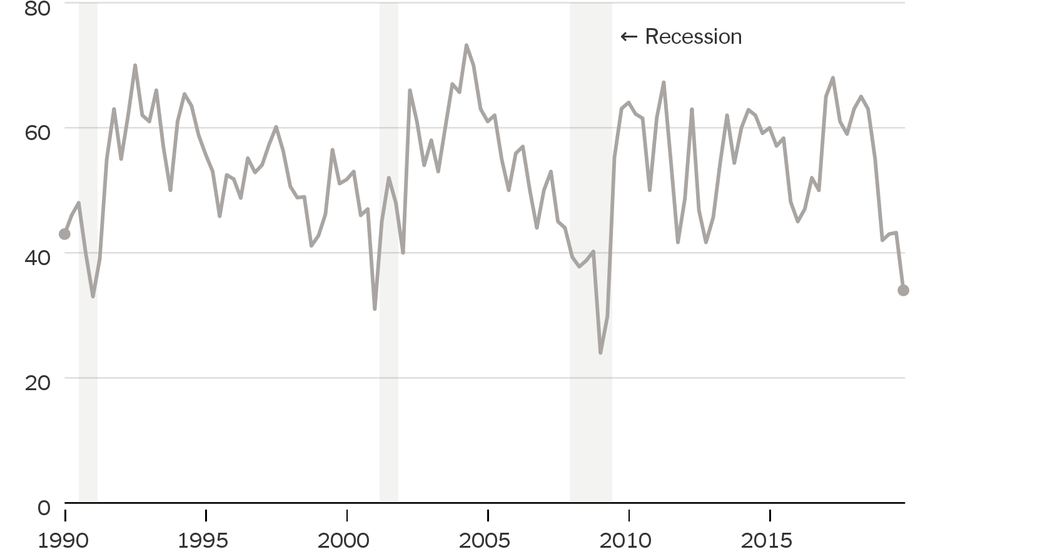 American companies spent more than $800 billion on their own shares last year, taking a windfall from deep corporate tax cuts to try to bolster their share prices and improve the look of their quarterly earnings reports.

This year, as the economy’s worsening prospects rattle executives, those buybacks are slowing down. The mood among corporate bosses is likely to stay subdued in the face of the trade war, the broadening impeachment inquiry of President Trump and the 2020 presidential election.

“If you’re at a point where trade and politics are stymieing the ability to plan for the future, I think that that’s another huge factor in terms of how companies are going to spend cash or if they will spend as much cash as they have been,” said Savita Subramanian, head of United States equity strategy at Bank of America Merrill Lynch.

Confidence among chief executives fell to its lowest level in a decade in the third quarter, according to survey data collected by the Conference Board, a nonprofit research group. The last time the survey came close to showing these levels of gloom, businesses were still shedding about 800,000 jobs a month because of the recession.

Things are nowhere near as bad as they were in 2009. Unemployment is lower than it has been in about 50 years. But the economy’s growth has slowed from a 2.9 percent pace in 2018. The economy is expected to grow 2.3 percent this year and could slow to 1.7 percent next year, which would be the slowest rate since 2016, a period that many now view as something of a mini-recession.

In addition, the chief financial officers who control a company’s spending are also far less optimistic than they were two years ago, according to a quarterly survey by Duke University.

If companies hold back spending, including stepping in to buy up stocks when the market swoons, stock trading could be bumpier.

In the normal course of business, companies use their cash to build a new plant, raise wages or acquire a competitor. When they feel they have more cash than they need, they often hand it back to shareholders.

One way to do that is by paying a dividend. The other is to repurchase shares in the stock market, adding to demand and lifting their price. Either move at best serves only to reward shareholders, rather than bolstering the fundamentals of a business.

Buybacks can also make a company’s results look better, even if the fundamentals have not changed. And they have their critics, who say that buybacks are not a productive use of cash, that they put a priority on shareholders over other stakeholders like employees and customers, and that they amount to financial engineering aimed at making things look better than they are.

And a company's willingness to spend money on this kind of reward tends to move in step with executive confidence. If executives are worried about the future, they might hang on to cash in case of a rainy day.

When corporate leaders were more bullish about the economy, and had more cash to throw around, they snapped up shares. Last year, 30 percent of the cash spent by S&P 500 companies was used to repurchase stock, outpacing even the amount they put into long-term capital expenditures, such as investments in plants, equipment and buildings, according to Goldman Sachs.

The pace of buybacks this year has declined from last year’s record of more than $800 billion. That’s partly because the surge was fueled by the large tax cut, which left companies with high levels of cash.

But waning confidence could mean the drop continues into next year. Goldman Sachs analysts expect buybacks will fall 15 percent in 2019, to a bit more than $700 billion, and then 5 percent in 2020 to $675 billion.

That could have repercussions for the stock market.

Over the last few years, companies have often stepped in to buy stock when the market was tumbling. For instance, trading data from Goldman Sachs shows that when stocks suffered a 10 percent drop that began in January 2018, they bottomed out after a burst of corporate buying. A sharp tumble in stocks last fall was also blunted by the surge in buybacks, which stabilized the market temporarily.

“The corporate buyer has been willing to step in, and I think that’s definitely supported share prices in a significant way,” said Lori Calvasina, head of United States equity strategy at RBC Capital Markets.

So back to what this all means to stock prices. A drop in share buybacks has important implications for one of the key metrics on which stocks are judged: earnings per share.

This is where the financial engineering claims come up. Analysts say this technical effect of share buybacks has been a top reason that earnings-per-share growth has kept climbing even when profits have dropped.

“If you didn’t have buybacks coming in and supporting the earnings-per-share growth, you’d probably be looking at some slight declines,” Ms. Calvasina said. “It’s sort of kept you in slightly positive territory on earnings growth, and it’s also just supported share prices when they’ve been willing to step in and buy.”

When Vince McMahon tried to launch a football league to take on the NFL in 2001, he chose NBC as his broadcast (and business) partner. But when the league begins its second life next year,...
Fortune
05.06.19

When a city falls for a chef’s cooking, it’s easy to forget the dining experience is a temporary sensation. Though chef Sean Brock’s efforts both in and out of the kitchen helped raise Charleston’s profile...
Fortune
06.30.19

As measles outbreaks continue to impact communities across the United States, the commissioner of the U.S. Food and Drug Administration (FDA), Scott Gottlieb, told Axios that states must act to reduce vaccine exemptions, or the...
Fortune
02.22.19

Tropical Storm Dorian is expected to become Hurricane Dorian in the coming days and could create life-threatening flooding, landslides and power outages in areas that are still recovering from past storms. The National Hurricane Center...
Fortune
08.28.19

It’s been a year since All Raise entered the public eye as the preeminent organization working to advance women in venture capital and Silicon Valley. On the heels of that milestone, the group has named...
Fortune
04.09.19

Years after ads for unproven medical treatments and therapies spread across the Internet, Google is finally cracking down on them. The search giant said on Friday that it would prohibit ads promoting experimental medical techniques,...
Fortune
09.06.19

The impact of Target’s weekend register glitch won’t show up until the retailer discloses quarterly revenue in August, but it could have cost the company about $50 million in lost sales, according to one analyst....
Fortune
06.17.19