The Atlantic
What Will Change When Impeachment Goes Public? Headlines for October 30, 2019 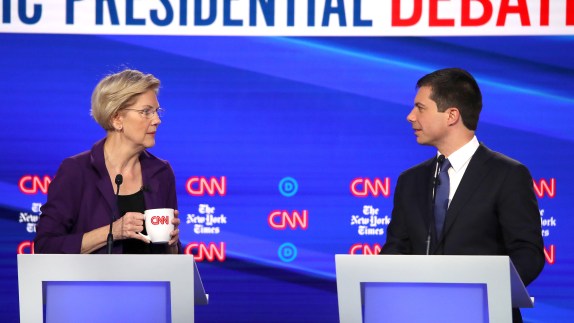 Let’s play a game I’m calling “Guess That 2020 Candidate.” The person I’m thinking of is a fresh face who would make history if elected president. They have ties to Harvard University and are known for giving thoughtful, sometimes wonky answers to questions. They hail from the middle of the country, which they play up on the stump. They’re a trendy choice among cosmopolitan elites, but they face a real challenge in diversifying their coalition.

It’s a trick question, of course: That description can apply to either South Bend, Indiana, Mayor Pete Buttigieg or Sen. Elizabeth Warren. Given everything the two have in common, it seems like they would be competing for the same “lane” of Democratic voters — which implies only one can emerge as the winner of what I’ll call the “ivory-tower primary.”

Except their supporters aren’t exactly alike. At least, not anymore. And that’s because highly educated white Democrats — like every demographic — aren’t a uniform voting bloc.

I dove into the crosstabs of some recent polls to see how much Buttigieg and Warren are truly relying on the same type of voter. And their supporters do have some obvious similarities. For example, the candidates’ bases are predominantly white — and they especially struggle among black voters. Check out their support by race in recent<a class="espn-footnote-link" data-footnote-id="1" href="https://fivethirtyeight.com/features/buttigiegs-centrist-pivot-may-be-winning-him-a-new-base/#fn-1" data-footnote-content="

">1 national polls of the Democratic primary:

The polls also indicate that both Buttigieg’s and Warren’s bases are disproportionately college-educated. While we don’t have a table for you here,<a class="espn-footnote-link" data-footnote-id="2" href="https://fivethirtyeight.com/features/buttigiegs-centrist-pivot-may-be-winning-him-a-new-base/#fn-2" data-footnote-content="

That’s because the categories of educational attainment (e.g., “high school” vs. “non-college grad”) are different from pollster to pollster, so they can’t be directly compared.

But there is at least one important distinction between Buttigieg’s and Warren’s supporters. While both candidates have predominantly white, college-educated bases, Warren’s is more clearly liberal, while Buttigieg’s is more ideologically diverse.

It’s clear from the polls that liberal Democrats — and specifically very liberal Democrats — are Warren’s bread and butter. Although she averages 20 percent overall support in the polls in the table, she averages 24 percent among somewhat liberal respondents and 28 percent among very liberal ones. But Buttigieg doesn’t seem to have an obvious ideological base. For example, the latest Quinnipiac poll says Buttigieg’s support is about equally strong among moderate/conservative voters and somewhat liberal voters, but notably lower with very liberal voters. But CNN/SSRS finds higher Buttigieg support among liberal respondents than moderate and conservative ones.<a class="espn-footnote-link" data-footnote-id="3" href="https://fivethirtyeight.com/features/buttigiegs-centrist-pivot-may-be-winning-him-a-new-base/#fn-3" data-footnote-content="

Quinnipiac and CNN/SSRS didn’t make it into the table above because their ideological crosstabs are broken down differently than other polls’.

In other words, Buttigieg’s base in April looked more like Warren’s does today. What caused them to diverge? One theory is that Buttigieg himself has tacked toward the center. On the campaign trail, he has deemphasized his plans to overhaul government institutions and attacked Warren for being evasive on how she will pay for her “Medicare for All” proposal. Instead, his campaign is promising “a plan that works for all of us,” which may very well be resonating with the more consensus-oriented wing of the party — and alienating true believers on the left.

But it could also be that Buttigieg’s rhetorical pivot was dictated by a new political reality for him — that Warren, who has risen steadily in the polls since April, is now dominant among the white, liberal, college-educated voters who gave Buttigieg his first surge. If so, Buttigieg’s message may be changing in response to the polls — not the other way around.

Second, if Buttigieg’s base continues to shift toward the middle, he may end up grateful to be in the moderate “lane”; according to the 2016 Cooperative Congressional Election Study, half (51 percent) of Democratic primary voters are actually moderate or conservative, not progressive.

And finally, more broadly, the subtle shift in Buttigieg’s supporters since April suggests that candidate coalitions can be malleable. Just because a candidate’s base is a certain type of voter today doesn’t mean he’s stuck with that wing of the party for the rest of the race. Political analysts — hi! — would do well to remember that.

The 16-year-old Swedish climate justice activist Greta Thunberg has arrived in New York City after a 15-day voyage across the Atlantic in a solar-powered 60-foot racing yacht. Thunberg came to the United States to attend...
Democracy Now!
08.29.19

House Oversight Committee Chairman Elijah Cummings (D-MD) wrote in a Friday letter that the committee had obtained documents showing that lawyers for President Trump lied to the Office of Government Ethics about Trump’s reimbursements to...
Talking Points Memo
02.15.19

Back in the United States, Iowa Republican Congressmember Steve King lashed out at a college student at a campaign event in Des Moines Thursday for asking about how King’s personal beliefs line up with those...
Democracy Now!
11.02.18

If Democrats “want to keep and expand their majority in the House, take back the Senate and win the White House, Democrats must show the American people that they will aggressively stand up and fight...
Alternet
11.24.18

On the day he met with congressional leaders to discuss the budget stalemate, President Donald Trump repeated several false and misleading claims about the Southwest border and the wall he wants to build: Trump tweeted that...
FactCheck.org
01.02.19

Ten candidates vying for the 2020 Democratic presidential nomination took the stage in Detroit last night in the first of a two-night CNN-hosted debate. The evening was billed as the first showdown between the two...
Democracy Now!
07.31.19

https://www.youtube.com/watch?v=bA5rxBIzIGA Subscribe to the Real Time YouTube: http://itsh.bo/10r5A1B In his editorial New Rule, Bill calls for an end to the practice of turning consumers into critics. Connect with Real Time Online: Find Real Time on...
Real Time with Bill Maher
09.27.19

We’ve done a lot of post-debate analysis unpacking the findings from the panel survey we conducted with Morning Consult. But while we’ve looked at how respondents as a whole rated the candidates’ performances, we also...
FiveThirtyEight
07.03.19