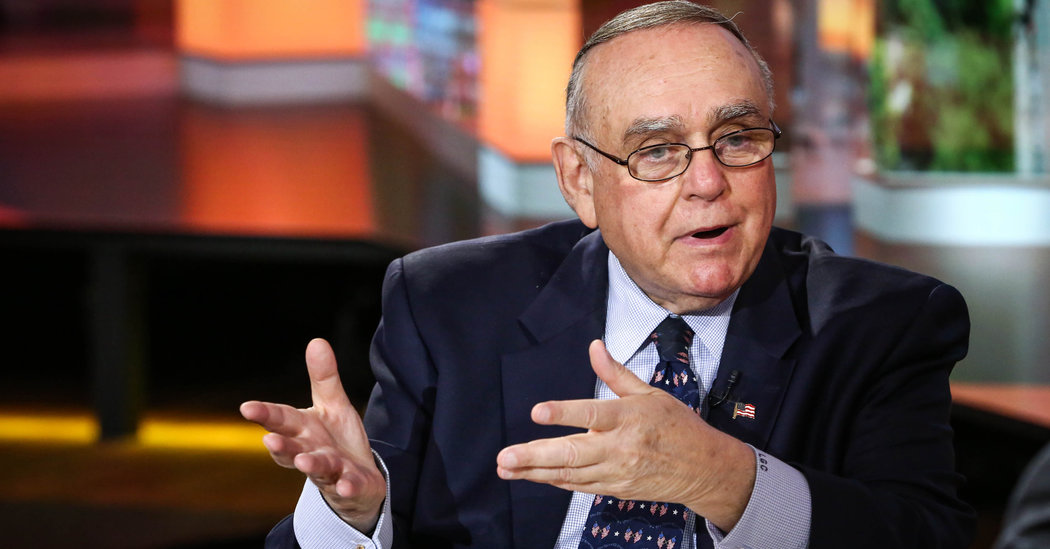 Escalating the war of words between Wall Street and Senator Elizabeth Warren, Leon Cooperman, a billionaire money manager, denounced her recent tweet encouraging him to “pitch in a bit more” because of his success in life, saying she sounded like “a parent chiding an ungrateful child.”

“However much it resonates with your base, your vilification of the rich is misguided,” wrote Mr. Cooperman, the billionaire manager of the Omega Family Office, in an Oct. 30 letter made public on Thursday. “For you to suggest that capitalism is a dirty word and that these people, as a group, are ingrates who didn’t earn their riches … and now don’t pull their weight societally indicates that you either are grossly uninformed or are knowingly warping the facts.”

Mr. Cooperman’s letter was the culmination of weeks of long-distance tension with Ms. Warren, the Massachusetts Democrat who has styled herself as a capitalist who nevertheless wants to overhaul the excesses of Wall Street and raise taxes on the country’s richest. Like many money managers and investors, Mr. Cooperman, the 76-year-old former hedge fund manager, has taken umbrage at Ms. Warren’s critique of the finance industry and like others on Wall Street predicts there will be stock-market losses if she were to win the presidency.

Ms. Warren’s campaign did not immediately respond to a request for comment to Mr. Cooperman’s remarks, which were first published by CNBC.com on Thursday afternoon before going viral. But later, she wrote on Twitter: “Leon is wrong. I’m fighting for big changes like universal child care, investing in public schools, and free public college. We can do all of that with a #TwoCentWealth Tax. Leon can and should pitch in more—so that every kid has the same opportunities he did to succeed.”

In an indication of their hostility to a theoretical President Warren, Wall Street donors have lavished resources on President Trump and on more moderate Democrats, including Mayor Pete Buttigieg, of South Bend, Ind., according to figures compiled by the Center for Responsive Politics.

For Ms. Warren, who is now polling near the top of the Democratic primary field, attacks from Wall Street have been welcome — both as a signal of her populist credibility and as a rallying cry for small donors. In September, when CNBC’s Jim Cramer went on a rant about how fearful Wall Street executives were of her possible nomination, she posted the video on Twitter and responded, “I’m Elizabeth Warren and I approve this message.”

And while Ms. Warren’s signature issues include ambitious structural changes like “Medicare for all” and combating climate change, many of her other policy ideas relate to shoring up the middle class by overhauling Wall Street.

Her “Stop Wall Street Looting” bill would curtail the freedoms of private-equity companies, for instance, and her idea to reestablish the Glass-Steagall Act would break up big banks. She has also taken aim at the wealthy, proposing among other things a so-called ultra-millionaire tax that would force households worth $50 million to $1 billion to pay 2 percent of their wealth in taxes annually.

These issues have gnawed at Mr. Cooperman, who used his five-page letter to rebut some of Ms. Warren’s platform. Citing entrepreneurs like the Home Depot founders Ken Langone, Bernie Marcus and Arthur Blank, and the Bloomberg media company founder and former New York City mayor Michael Bloomberg, Mr. Cooperman argued that many entrepreneurs — himself included — started off with few resources and have long shared the wealth they earned with needier people. He argued that the economists advising Ms. Warren have made “highly dubious assumptions,” such as focusing on gross, rather than net, taxes. And he suggested that Ms. Warren should focus on income opportunity, rather than income inequality.

This is not Mr. Cooperman’s first attack on Ms. Warren.

In a television interview on Oct. 16, he predicted that stocks would fall 25 percent if Ms. Warren were elected. On Oct. 23, he told Politico that Ms. Warren was soiling the American dream and used profane language to make his point.

It was then that Ms. Warren issued her own tweet, exhorting Mr. Cooperman, whose estimated net worth is $3.2 billion: “Leon, you were able to succeed because of the opportunities this country gave you. Now why don’t you pitch in a bit more so everyone else has a chance at the American dream, too?”

Alerted to the tweet, Mr. Cooperman, who says he plans to donate most of his wealth to philanthropic causes, was offended. “She mischaracterized who I was, and I wanted to straighten her out,” he said. He then began composing the letter.

Ms. Warren is one of two Democratic candidates to have sworn off high-dollar fund-raisers in her presidential bid, along with Senator Bernie Sanders of Vermont. She previously raised money from large donors for her Senate races and transferred $10 million of those funds to seed her presidential campaign, which her rivals have increasingly begun pointing out.

We’re of somewhat mixed minds here at FiveThirtyEight about the importance of the State of the Union, both its value as a political tradition and the likelihood that it will yield a substantive change in...
FiveThirtyEight
02.05.19

This is a rush transcript. Copy may not be in its final form. JUAN GONZÁLEZ: We begin today’s show in the Bahamas. It is a scene of utter devastation after the Category 5 Hurricane Dorian...
Democracy Now!
09.04.19

In the wake of the attack on two New Zealand mosques, President Donald Trump said he did not see white nationalism as a rising threat around the world, but rather “a small group of people...
FactCheck.org
03.20.19

This is a rush transcript. Copy may not be in its final form. AMY GOODMAN: With one day left to pass a government spending bill before tonight’s midnight deadline to avert another government shutdown, both...
Democracy Now!
02.15.19

Democratic Sen. Michael Bennet announced on Thursday morning that he is running for president on “CBS This Morning.” And while it won’t be easy for the Colorado lawmaker to win his party’s nomination, he’s been...
FiveThirtyEight
05.02.19

This article is adapted from FiveThirtyEight’s weekly “Do You Buy That?” segment on “This Week.” The New York Times and The Washington Post recently reported that some influential Democrats are clamoring for new candidates to...
FiveThirtyEight
10.28.19