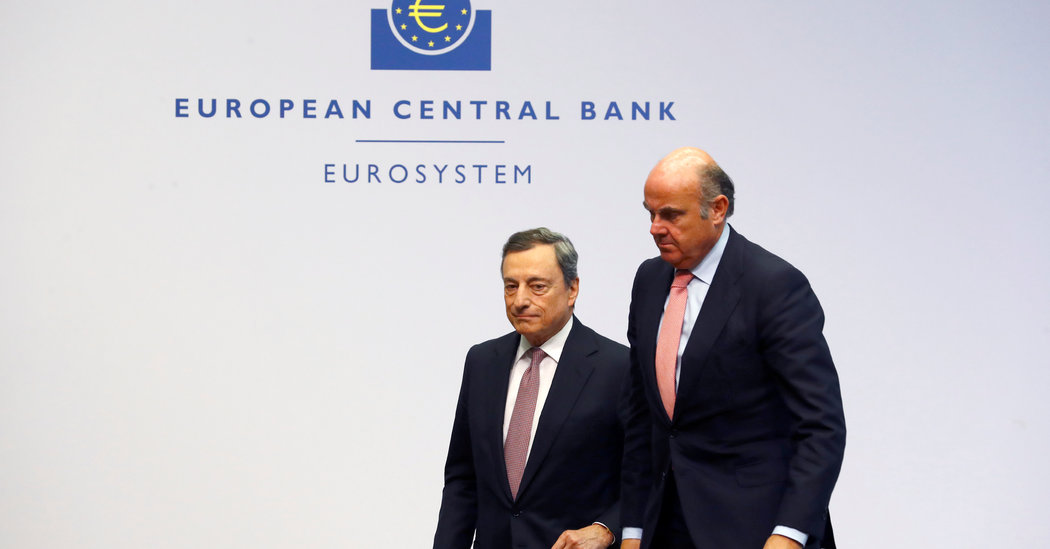 FRANKFURT — Mario Draghi led his last monetary policy meeting as president of the European Central Bank on Thursday, his legacy as savior of the eurozone clouded by divisions among the bank’s policymakers that have burst into the open in the final months of his tenure.

Christine Lagarde will be sworn in as Mr. Draghi’s successor on Tuesday, and will immediately confront a revolt by members of the bank’s Governing Council who believe the bank’s easy-money policies have created asset bubbles and set the stage for a financial crisis.

Mr. Draghi insisted on Thursday that those concerns were overblown and that stimulus was still needed. The eurozone economy is suffering “protracted weakness,” he said.

“Geopolitical uncertainty has continued to affect markets,” he said during a news conference in Frankfurt. “The main risk from all viewpoints is a downturn in the economy, whether it’s global or it’s eurozone.”

The Governing Council did not make any changes to monetary policy at the meeting on Thursday, six weeks after it took action to head off recession in the 19 countries in the eurozone.

But a vocal faction on the council has contended that measures intended to push down market interest rates went too far. They say low interest rates, which have fallen below zero for many government bonds, have encouraged irresponsible borrowing.

Mr. Draghi, looking relaxed and perhaps relieved to soon be shedding the burdens of a job he has held since 2011, shrugged off questions about the split within the Governing Council. The mood during his final meeting, he said, was conciliatory.

“Today, the discussion was basically supportive,” he said. “One of the dissenters called for unity. Another dissenter said bygones are bygones.”

Whether the same generosity will be extended to Ms. Lagarde, who attended the monetary policy meeting in Frankfurt but did not appear at the news conference, remains to be seen.

In September, the council cut the rate banks pay to park money at the central bank to minus 0.5 percent from minus 0.4 percent. The negative interest rate is essentially a penalty on lenders that hoard cash. The council also decided to resume purchases of government and corporate bonds, a way of pushing down market interest rates and making credit cheaper.

These decisions inspired an unusually open backlash from some members of the Governing Council, from countries including Germany and the Netherlands, who believe they were unnecessary and reckless.

Klaas Knot, the president of the Dutch central bank, said the measures were “disproportionate to the present economic conditions.”

“There are increasing signs of scarcity of low-risk assets, distorted pricing in financial markets and excessive risk-seeking behavior in the housing markets,” Mr. Knot said in a statement in September.

Until recently, the dissenters expressed their feelings discreetly, while Mr. Draghi insisted that key decisions by the central bank were backed by consensus. Unity is important to a central bank’s credibility and its ability to influence financial markets. That consensus was essential during the novel and extraordinary measures introduced on Mr. Draghi’s watch that were seen as having prevented the eurozone from collapse during a severe debt crisis that began in 2010.

Mr. Draghi argued Thursday that the crisis measures had worked, and he offered assurances that the central bank would keep a close eye on the potential risks. “The improvements in the economy have more than offset the negative side effect from low rates,” he said.

The dissenters appear to be taking advantage of the leadership transition to stake out their views before Ms. Lagarde has had a chance to establish her authority.

“I have no advice for Christine. She knows better than anyone else what to do and what to say,” he said.

Ms. Lagarde will soon acquire a potential ally in this debate. The German government on Tuesday nominated Isabel Schnabel, a member of the German Council of Economic Experts, to a vacancy on the central bank’s Executive Board. If confirmed, Ms. Schnabel will replace Sabine Lautenschläger on the six-person board, which is part of the Governing Council and manages the operations of the central bank.

Ms. Lautenschläger resigned last month. She did not give a reason, but is widely assumed to have been unhappy with the central bank’s course. She was also the only woman on the 25-person Governing Council, a gender imbalance that was a focus of a conference at the bank’s headquarters on Tuesday. Ms. Schnabel’s appointment, and the arrival of Ms. Lagarde, bring that number to two.

In contrast to much of the German economics establishment, Ms. Schnabel, a professor of economics at the University of Bonn, is regarded as a supporter of the policies pursued under Mr. Draghi.

The decision last month to increase stimulus was a response to signs of an economic slowdown caused by the trade war between the United States and China, anxiety over Brexit and conflict in the Middle East.

But even some economists who supported those measures have become concerned that cheap credit is creating real estate bubbles.

Central bank policies “made an essential contribution to economic recovery after the global financial crisis and the eurozone debt crisis that followed,” Jürgen Michels, chief economist at the German bank BayernLB, said in a commentary published Thursday by the Ifo Institute for Economic Research in Munich. “As time goes on, the stimulus effect of these policies decreases, and negative factors get the upper hand.”

Mr. Draghi, never comfortable discussing his innermost feelings or private life, deflected questions about his legacy. He declined to say what he would do next or to answer speculation that he could become president of Italy, where he is something of a national hero.

Would you listen to a Spotify playlist inspired by the image of crushing grapes? That’s a question we can now answer for ourselves, as Tarpon Cellars and Spotify have teamed up to release two playlists...
Fortune
09.08.19

Good afternoon, readers. We're hunkered down and closing the upcoming issue of Fortune today. But in the meantime, I hope you'll follow along with my colleagues' outstanding coverage of the equally-outstanding Fortune Brainstorm Tech conference...
Fortune
07.16.19

Good morning. “Customer focused, data driven” has become something of a mantra for modern business. Ubiquitous data, natural language processing, machine learning and social media have all combined to make it possible for companies to...
Fortune
08.05.19

Opening up another legal front against the Democrats investigating him, President Donald Trump on Tuesday sued the House Ways and Means Committee and New York state officials to prevent his state tax returns from being...
Fortune
07.23.19

YEN THANH, Vietnam — Across the village, the altar tables have already been set up. In Buddhist and Catholic households alike, families have not waited for the final word on whether their daughters, sons, brothers...
New York Times
10.31.19

Labor Secretary Alexander Acosta said Friday he is resigning following renewed scrutiny of his handling of a 2008 secret plea deal with wealthy financier Jeffrey Epstein , who is accused of sexually abusing dozens of underage girls....
Fortune
07.12.19

Here’s your week in review, in haiku. 1.Is economicanxiety getting youdown, “n-word Nancy?”  2.Professor Muellerwonders why no one did thereading assignment 3.Would you rather getcash from Equifax, or haveFacebook broken up? 4.Ballot boxes breached:The pravda...
Fortune
07.26.19