Sudanese Authorities Crackdown on Rights Ahead of Unity Government 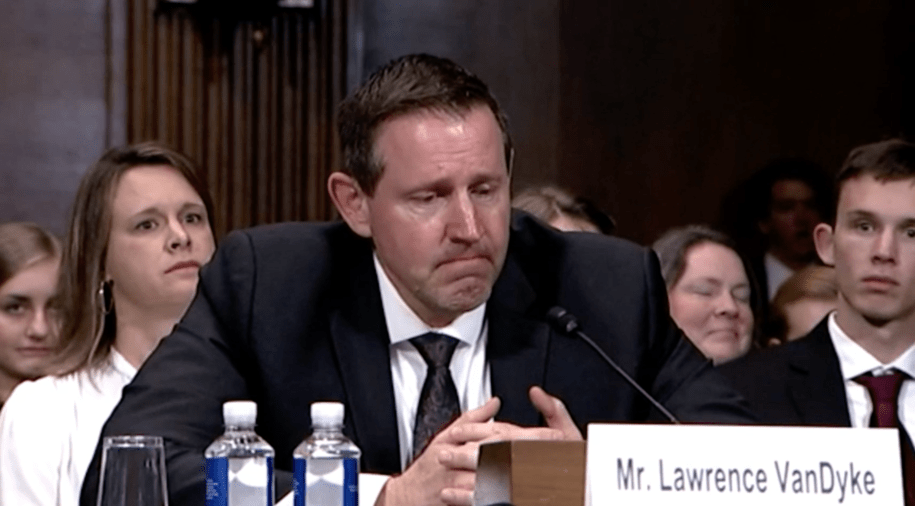 The crocodile tears are about to flow.

The American Bar Association, a nonpartisan professional organization that has for decades provided advice to the Senate on the qualifications of judicial nominees, made one such nominee cry. That's because it rated him unqualified because, basically, he's a horrible human being.

The committee providing these assessments rates candidates "on a review of integrity,
professional competence, and judicial temperament," and, based on those things, it found Lawrence J.C. VanDyke not qualified to serve on the 9th Circuit Court of Appeals. They conducted 60 interviews with lawyers and judges and another individual who have all worked directly with him or faced him and are familiar with him professionally. And, damn. While they find he is "highly educated" and has "nearly 14 years of experience" in appellate law, they write, "Mr. VanDyke’s accomplishments are offset by the assessments of interviewees that Mr. VanDyke is arrogant, lazy, an ideologue, and lacking in knowledge of the day-to-day practice including procedural rules. There was a theme that the nominee lacks humility, has an 'entitlement' temperament, does not have an open mind, and does not always have a commitment to being candid and truthful." Which makes him a perfect Trump nominee. The committee's evaluator raised these concerns with VanDyke, including that he was unlikely to be fair particularly to LGBTQ litigants. "Mr. VanDyke would not say affirmatively that he would be fair to any litigant before him, notably members of the LGBTQ community."

Apparently figuring that over-the-top emoting in a hearing worked for Brett Kavanaugh, VanDyke tried that in his confirmation hearing, breaking into crocodile tears at the suggestion he was an antigay bigot. He did not say that he would be unfair, he warbled. Then he paused, as The Washington Post put it, "apparently too overcome to speak." His eyes glistening with righteous tears, he continued, "It is a fundamental belief of mine that all people are created in the image of God and they should all be treated with dignity and respect." Not if 60 people who know him best professionally are to be considered. Or his history. Sen. Dianne Feinstein noted that, as Nevada's solicitor general, he had supported a marriage equality ban, and Sen. Patrick Leahy brought up a 2004 op-ed in which VanDyke wrote that same-sex marriage would "hurt families, and consequentially children and society."

Here's another one for Susan Collins to decide to take a stand against, when her vote isn't necessary anyway.

The NRA Foundation holds fundraising programs across the country. This is not surprising, considering that the NRA is technically a nonprofit...
Daily Kos
11.04.19

Activism takes many forms. When Adriel Hampton found out Facebook wouldn't let him run ads with lies in them because he "wasn't a candidate for public office" (NO, REALLY), Hampton went ahead and put his...
Crooks and Liars
10.30.19

When it was announced that the government of Fiji would chair this year’s climate talks in Bonn, Germany, expectations were high. As a small island, Fiji sees climate change as an existential threat. Expand Indigenous...
Human Rights Watch
11.03.18

Former House of Representatives member Rob Curbelo, a Republican from Florida, has signed on as a senior advisor with the Cannabis Trade Federation, it was announced on Thursday. Curbelo said in a press release that...
High Times
02.22.19

Five states will hold elections this November for governor or state legislature — and a lot seems to be on the line. In the Louisiana gubernatorial race, a Republican victory would mean total GOP control...
FiveThirtyEight
10.10.19

On July 23, 1974, Rep. Lawrence Hogan, Sr., a Republican on the House Judiciary Committee, bought airtime on TV networks across his home state of Maryland. He had a big announcement to share: Hogan was...
FiveThirtyEight
10.09.19

We can help Jennifer Riley Collins make history this year in Mississippi. She could become the first woman elected attorney general and the first African American elected statewide since Reconstruction. Those are big deals, but...
Daily Kos
10.31.19

Democrats Took Back the House That Republicans Weren't Using

The Blue Wave that Everyone Missed: Democrats Had a Huge Win...

Ranked: These Are the 6 Republican Incumbents We’d Most Like to...