7-Year-Old Girl Is Shot in Chicago While Trick-or-Treating, Police Say 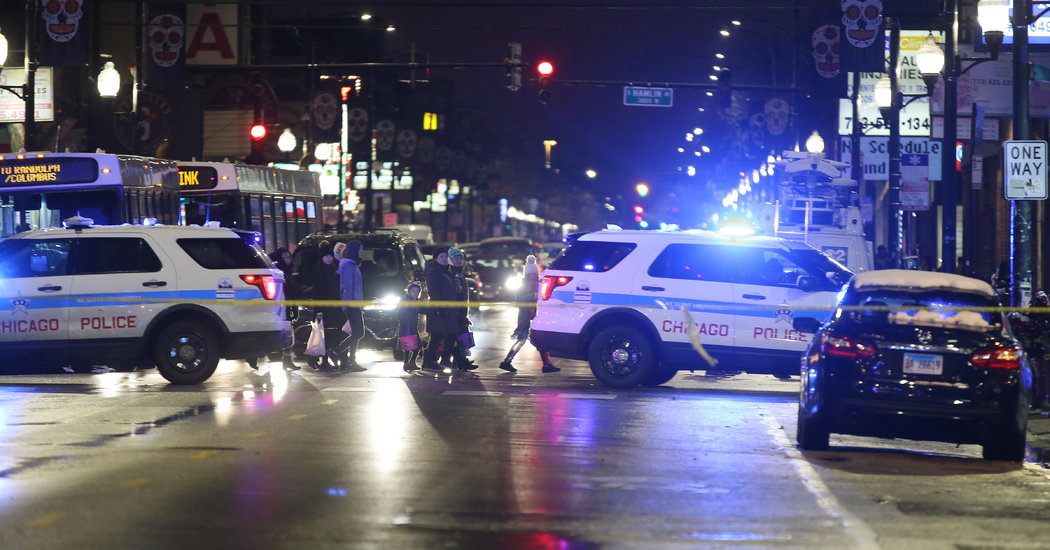 A 7-year-old girl was shot in the neck while trick-or-treating with her family on Chicago’s West Side on Thursday evening, leaving her in critical condition, the police said.

The shooting, which happened around 5:30 p.m. in the Little Village neighborhood, occurred when at least one person in a group of at least three men opened fire on a 31-year-old man, according to the Chicago Police Department.

That man was shot in the left hand and was in stable condition at a hospital, according to the police. The girl, who The Chicago Sun-Times reported had been wearing a bumblebee costume for Halloween, was taken to another hospital with life-threatening injuries, the police said.

The authorities said that the girl and the 31-year-old man — whose names were not released — were not together. Anthony Guglielmi, a spokesman for the police, said on Twitter that the police believed she was an “unintended victim.”

“Just a 7-year-old child out here, with her family, trick-or-treating, just like anybody else,” Sgt. Rocco Alioto of the Chicago Police Department said at a news conference at the scene. “It shouldn’t happen anywhere. It shouldn’t happen in this city.”

Sergeant Alioto said that detectives were canvassing the area for witnesses and reviewing surveillance footage. The authorities believe the gunman fled on foot. No arrests had been made as of Thursday night.

Larry Langford, a spokesman for the Chicago Fire Department, said he could not recall ever treating a child for gunshot wounds on Halloween during his 20 years on the job.

“It gets to the first responders because they have kids, too,” he said. “It’s a tragic situation, but it’s not a common situation in Chicago.”

Chicago has long struggled with gun violence. In one weekend in August, for example, seven people were killed and 52 wounded by gunfire, including a 5-year-old boy who was shot in the leg while sitting in a car.

Overall shootings, however, are down this year compared with last year.

Mayor Lori Lightfoot has also pledged to find solutions to the problems with gun violence.

Earlier on Thursday, Mr. Guglielmi said on Twitter that the Chicago Police Department planned to release on Friday statistics that showed a continued decrease in gun crime.

(WASHINGTON) — President Donald Trump is pushing back against criticisms that a leak of his private schedule suggests he is not working hard. Trump tweeted that it “should have been reported as a positive, not...
TIME
02.10.19

On a chilly April evening, several elderly Palestinian men sat in a smoke-filled downtown Ramallah cafe watching the news. The anchor on the enormous flat-screen mounted on the wall read election results that would affect...
TIME
09.13.19

President Donald Trump attacked Robert Mueller’s Russia investigation in a speech to conservative supporters on Saturday, calling the probe “bullsh–” and claiming the special counsel was biased against him. Trump’s comments to the Conservative Political...
TIME
03.02.19

Here's what you need to know: Video House Democrats and Republicans were divided on setting rules for the impeachment inquiry into President Trump. The resolution would make evidence public and also allow Mr. Trump’s legal...
New York Times
10.31.19

(SANTA FE, N.M.) — Former CIA operative Valerie Plame has decided to run for the Democratic nomination to an open congressional seat in New Mexico, taking on an already crowded field in a heavily Democratic...
TIME
05.09.19

American companies spent more than $800 billion on their own shares last year, taking a windfall from deep corporate tax cuts to try to bolster their share prices and improve the look of their quarterly...
New York Times
10.24.19

President Donald Trump isn’t exactly the most popular person among America’s European allies, though Vice President Mike Pence doesn’t seem to have expected that. Addressing America’s allies in a speech at the Munich Security Conference...
TIME
02.17.19

President Donald Trump and Joe Biden both treated questions about the former vice president’s conduct around women as a joking matter in separate remarks Friday. After several women came forward to say that Biden had...
TIME
04.05.19